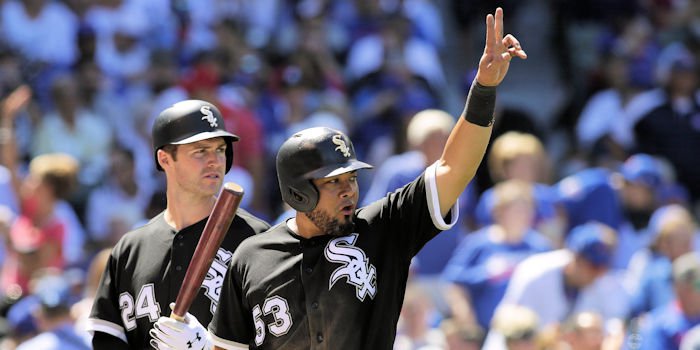 CHICAGO – The difference between the Cubs and White Sox was the long ball.

The White Sox hit two home runs in the 3-1 victory over the Cubs Monday afternoon at Wrigley Field, snapping a nine-game losing streak this season. The Cubs scattered eight hits, were 0-for-9 with runners in scoring position and left 10 on base, but still had opportunities to tie to take the lead in the eighth inning.

The game was the opener of four-games against the South Siders. The Cubs and White Sox will play at Wrigley again on Tuesday in a 2:20 p.m. start, and the series will move to Comiskey Park for the final two games.

The loss to the White Sox broke a four-game winning streak in interleague play for the Cubs. The Cubs were a major-league-best 8-1 since the All-Star break before today's loss.

Ben Zobrist worked a one-out walk in the second inning setting up the game’s first run. Zobrist advanced to third on double to left by Jon Jay and scored on a softly hit ball to second by Kyle Hendricks, giving the Cubs a 1-0 lead after two innings.

After giving up a single and game-tying double in the fifth to Jose Abreu, Cubs’ starter Kyle Hendricks was replaced by Justin Grimm with the game knotted at 1-1.

Hendricks – who made his first start since being placed on the disabled list in early June with right-hand tendinitis received a no decision. Hendricks made two rehab starts with Double-A Tennessee, July 10-17, allowing just two hits and one earned run in 8.1 innings, and he tossed 5.0-perfect innings in his last start.

The White Sox struck for another single run in the sixth on Adam Engel’s third home run of the season giving the White Sox their first lead of the game at 2-1.

Grimm fell to 1-1 after giving up the go-ahead run on the homer – the only hit allowed in his 1.2 innings of work.

Matt Davidson hit his 19th homer of the season off of Koji Uehara to leadoff the eighth inning and extending the White Sox lead to 3-1.

White Sox starter Miguel Gonzalez pitched 7.1 innings giving up just one earned run on seven hits and three walks, in earning his fifth win of the season (5-9). He also struck out three.

The Cubs had two on in the eighth, but Javier Baez flied out to end the inning. The winning run came to the plate in the ninth after Kris Bryant hit a two-out infield single and the White Sox walked Anthony Rizzo on five pitches, but Wilson Contreras strukout looking on a pitch on the outside to end the game.

John Lackey will take the bump tomorrow for the Cubs, his 19th start of the season and ninth at home. Lackey returned from the 10-day disabled list (plantar fasciitis) with a victory in his last start, July 18 at SunTrust Park when he held the Braves to just one run (solo homer) over 5.0 innings in the Cubs 5-1 victory. Lackey has surrendered 2.17 homers per nine innings this season, the highest rate in the N.L. and more than double his career average of 1.00 HR/9. He will make his 18th-career start vs. the White Sox and second as a member of the Cubs. Last season, he held the White Sox to just one run on four hits as he tossed his 12th quality start against the club. He has pitched at least 6.0 innings in 15-straight starts vs. the White Sox, the longest active streak in the majors.