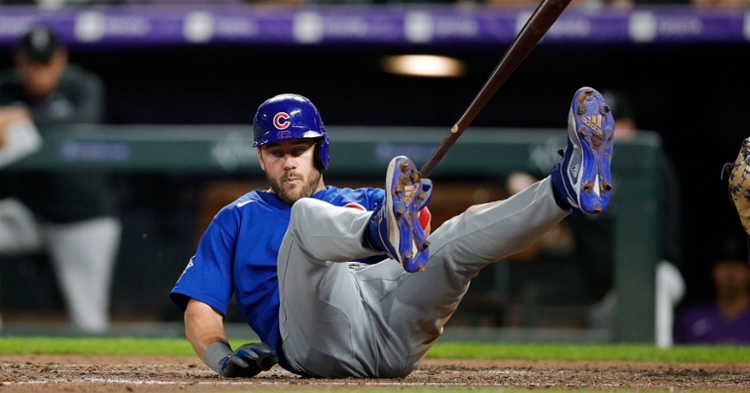 DENVER — Giving up 13 hits and 13 runs, the Chicago Cubs (51-57) did not put up much of a fight versus the Colorado Rockies (47-60) on Tuesday. The Rockies established a 7-2 lead in the fourth inning and cruised to victory the rest of the way at Coors Field. The Cubs were forced to go without David Ross for the majority of the game, as he was ejected for arguing balls and strikes in the second frame. Other than a mile-high home run skied by Ian Happ in the top of the fourth, the Cubs did not offer much meaningful excitement in the 13-6 defeat.

Kyle Freeland struck out the side in order in the top of the first, but Colorado native David Bote was not pleased with the questionable called third strike that ended both his at-bat and the half-inning. Zach Davies drew three groundouts in a row as he breezed through the opening frame.

Ross took umbrage with a suspect called strike that went against Patrick Wisdom in the second and had a fiery exchange with home plate umpire Adam Hamari over it. Wisdom responded by hitting a leadoff single on the very next pitch. Happ then dug in at the plate and fell down 0-1 on a called strike. Ross chirped some more about the strike zone from the dugout, and Hamari tossed him. After Happ grounded into a fielder's choice, Frank Schwindel swatted a double in his Cubs debut. Happ scored on a fielder's choice grounded into by Jason Heyward, and Austin Romine then grounded out to leave runners stranded at the corners.

The Cubs' early lead was short-lived, as Davies struggled to start the bottom of the second, culminating in Elias Diaz hammering a 411-foot grand slam with no outs. With two outs in the fourth, Happ went yard, elevating a towering solo shot out to left. The Rockies once again homered with zero outs in the fourth, as Sam Hilliard drilled a three-run shot that sailed 418 feet to right. Romine hit a comebacker that ricocheted off Freeland's foot in the fifth. Freeland remained in the game after being evaluated for a possible injury and then forced Johneshwy Fargas to ground into an inning-ending double play.

Michael Rucker tossed a scoreless fifth for the Cubs, and Freeland was removed prior to the start of the sixth, as he must have showed signs of an ailment while making his warmup pitches. Tyler Kinley toed the rubber in the sixth and prevented the Cubs from scoring. Rucker gave up a leadoff double to Diaz in the sixth and also got taken for an ensuing RBI double by Hilliard. After plunking the next batter, Rucker was on the receiving end of an RBI base knock by Raimel Tapia. C.J. Cron hit a two-run single with two outs that brought Trevor Megill in to pitch. At that point, the Rockies boasted a commanding 11-2 advantage.

Ben Bowden sat the Cubs down in order in the seventh, with Tapia robbing Schwindel of a hit by way of a leaping grab in left. Megill pitched a 1-2-3 seventh, and the Cubs tallied some garbage time runs with two outs in the eighth. Rafael Ortega hit a two-out single and took second due to fielder's indifference. Willson Contreras plated Ortega with an opposite-field base hit, and Bote brought Contreras home with a double to deep center. Bowden gave up both runs.

Wisdom struck out to end the two-out rally in the eighth but made up for it by pulling off an impressive snag at the hot corner that prevented Tapia from collecting an eighth-inning leadoff hit. However, former Rockies hurler Rex Brothers was tagged for two runs with two outs, as a double by Trevor Story and a single by Cron enabled a pair of baserunners to come home. Antonio Santos walked Happ to begin the ninth, and Happ later scored on a double hit down the left field line by Heyward, who capped off the scoring by coming home on a Santos balk. The Cubs opened the three-game series versus the Rockies with a 13-6 loss.