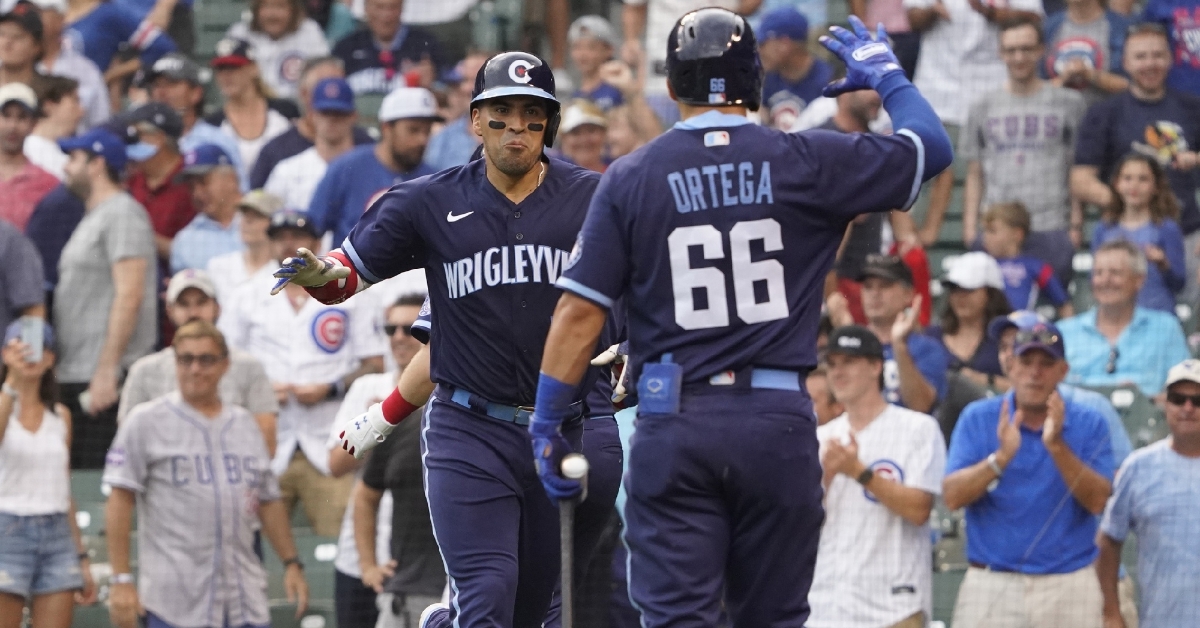 Friday afternoons at Wrigley have become a party, and the Cubs gave the fans a party. They set the tone right from the start and then took it to the Diamondbacks as they dominated them 8-3. It certainly helps that the Diamondbacks lost 24 straight games on the road at one point and have the worst road record in baseball, but you still need to play the game at hand.

Javy Baez got the party started in the first inning as he connected for a long three-run shot off Diamondbacks start Zac Gallen to put the Cubs up 3-0 in the first. Baez has been on a tear over the past month, hitting north of .320 to go with eight homers and 24 RBIs. That three-run shot was more than enough for Zach Davies as he turned in one of his better starts of the season.

Although he only lasted five innings given his pitch count, Davies kept Arizona in check allowing just two runs, and struck out eight hitters as he improved to 6-6 on the season and continues to lower his ERA. As if the three-run first wasn't enough, the Cubs added three more runs in the third courtesy of a Gallen wild pitch and a Nico Hoerner two-run single.

Robinson Chirinos got a rare start behind the dish and rewarded the Cubs skipper with three hits, including two solo shots. Even with all that, the Diamondbacks didn't go away quietly, using a Dalton Varsho double and homer to pick up all three of the Diamondback runs as the Cubs returned home with a solid 8-3 win. Keegan Thompson earned his first career save, tossing three innings to earn the save.

Friday afternoons at Wrigley have been great

One of the best things about playing at Wrigley field is the number of weekend day games the Cubs get. Fridays are especially fantastic as they often are the lone day game of the day, which gives fans a chance to unwind and do other things in the evening.

The Cubs have played a total of 11 Friday afternoon day games so far this season and have gone 9-2 in the process. That includes seven straight day game wins following today's win against Arizona. It is hard to pinpoint why this team has so much success during the day, but it could be when their opponents arrive from the day before.

Whatever the reason, the Cubs look comfortable playing in front of a Friday afternoon crowd, and they made sure to let that be known again. Certainly, the Baez homer helped get everyone on their feet, but just the environment itself is second to none when you compare it to the rest of the league. The Cubs certainly could benefit from more Friday day games, but that isn't how the schedule works.

It may have taken the Cubs six tries, but it looks like they finally found a backup catcher for Willson Contreras. Sure, many of the issues they have had to overcome have come from injuries, but even before the injuries, they were getting next to nothing in terms of backup catcher production.

Enter Chirinos, who is no stranger to the Cubs organization. The now 37-year-old has bounced around the league a ton, but at one point was a Chicago Cubs farmhand who was dealt to a different organization. It is amazing how things sometimes work out in life as his career has come full-circle, and he is back in the Cubs organization on a one-year deal.

Since his arrival, not only has he spared Contreras from time to time, but he has produced extremely during his small sample size. He is hitting north of .300 at the moment and his two-homer day gives him three homers in nine games with the Cubs. This is the type of production the Cubs have been searching for from the backup catcher role, and now Chirinos is here giving them that production.

There was a lot of good that came from Friday, but there was also some bad news surrounding the Cubs organization. That news circled Cubs left-hander Brad Wieck, who will not only be done for the rest of this season but maybe for quite a while.

Someone who was counted on to play a significant role in the Cubs pen, Wieck missed all of last season after undergoing heart surgery to fix an irregular heartbeat. He eventually returned to the field this season and pitched lights out during his time with the Cubs appearing in 14 games and not allowing a single run.

Then, he hit the IL again, where the news continued to get worse. For the second time in as many years, Wieck has an irregular heartbeat which required a second surgery. David Ross said that this was bothering Wieck for a while, and it was a matter of time until he needed this surgery.

Now that he has had the surgery, Wieck will begin another comeback attempt. As much as the Cubs want him back, you have to think the team will put his health first. At some point, Wieck may reach the point where enough is enough, as his heart may never be the same again.