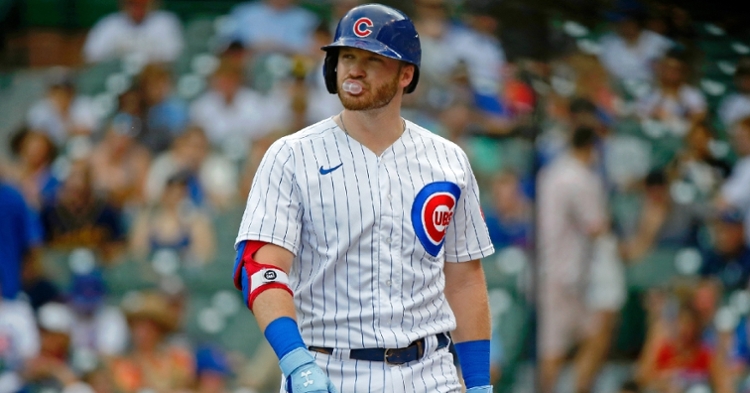 Let's Play Two! Those were the famous words that Mr. Cub Ernie Banks said himself way back in the day. After having their game Monday against the Brewers rained or, should I say, stormed out, the Cubs and Brewers hit the field for a split doubleheader on Tuesday. With more rough weather predicted as the day goes on, it will be interesting to see if both games get in.

For game one, the Brewers called upon rising star Freddie Peralta to take on Justin Steele, making his first career MLB start. After showing plenty of promise in the pen this season, Steele returned to Iowa to rehab a hamstring injury, where they once again stretched him out to be a starter. Although he didn't pick up a win, the Cubs had to like what they saw as Steele gave the Cubs five good innings of three-run ball to go with one walk and one strikeout.

All three runs allowed came via the home run as Willie Adames took him deep to lead off the fourth before Avisail Garcia followed suit with a two-run shot later in that inning to give the Brewers a 3-1 lead. Those homers came after the Cubs took an early lead when Patrick Wisdom took a bases-loaded walk in the third, but the Cubs wasted a golden opportunity to get more.

Still leading by two, the Brewers added to their lead by playing long ball again, with Lorenzo Cain taking Trevor Megill deep in the sixth to make things 4-1. Megill has struggled to keep the ball in the yard all season as he has now allowed five homers in nine innings of work. Looking to keep things close, a costly error allowed Wisdom to reach second before the Frank Schwindel ground-rule double pulled the Cubs within 4-2. In the seventh, the Cubs had another golden opportunity, but Wisdom and Greg Deichmann struck out with the bases loaded.

Justin Steele as good as advertised

While this may have been Steele's first start in the majors, it wasn't his first start overall. After going back to Iowa to get stretched out, the plan was for Steele to be in the Cubs rotation at some point this season. Across his minor league career, Steele appeared in 89 games with 80 of those starts.

Although he had a losing record, Steele posted an ERA below 3.60, proving that he could handle starting duties. In five appearances with Iowa after returning, Steele was lights out, posting an ERA below 2.00 and showing everyone why he was once regarded as a top 15 prospect in the system and one of the better pitchers.

Steele would have been in the majors a couple of years earlier had injuries not taken their toll on him. Even with his loss, the Cubs had to like what they saw on a challenging day to pitch. He may have only struck out one, but also walked one and scattered a handful of hits to limit the damage. Steele did allow a pair of homers which proved to be the difference, but overall, it was a great showing.

With the Cubs out of the playoff hunt, David Ross will be going with a six-man rotation the remainder of the season. That means Steele will get every opportunity to earn his spot in the rotation next season. This is one of the better outcomes of a lost season as it gives guys like Steele a chance to prove himself.

When you look at the Brewers staff, you notice they are headlined by three of the hardest throwers in the game. Not only that, but all three of them are 27 years of age or younger and have excellent command. Perhaps the best story out of all of them has been Peralta, who continues to impress.

Through 21 starts this season, Peralta has been the most consistent starter and has posted an ERA of 2.26 following two earned runs in 5 1/3 innings today. To go with that, 18 of his 21 starts have seen him allow two runs or fewer, including 12 straight starts. It's kind of hard for opposing teams to win games when Peralta doesn't allow runs.

Not only have teams seen his command take a dramatic increase this season, but opponents have a hard time squaring him up as teams have combined to hit just .157 off him this season. Had Corbin Burnes not gotten off to the start he got off to, and if Brandon Woodruff wasn't an all-star, all the talk would surround Peralta this season.

Despite not being an all-star, Peralta is certainly pitching like one and looking like an ace to a staff with three aces. He has owned the Cubs in his four starts against them this season as he has yet to allow more than two runs in any of his outings. That is not a coincidence that the Brewers are 4-0 against the Cubs this season when he starts.

11-3 record against the Cubs

Through 14 games this season, the Brewers have owned the Cubs, going 11-3. That includes a 5-2 mark at Wrigley, which includes three consecutive wins. This has been a common theme since the second half of 2018 as the once one-sided rivalry is tipping in the Brewers favor.

That is what happens when you have a team that consists of hard-throwing starters facing a team that strikes out a ton. The Cubs simply can't score against this team, and the Brewers somehow find ways to get it done. The Cubs have been out of the playoff race for the better part of a month, and the Brewers are a big reason why.

If these teams were 7-7 against each other or had the Cubs picked up some wins against them earlier this season, maybe things would be different. I want to look back at their previous series in Milwaukee when the Brewers swept the Cubs. Chicago had the lead in all three of those games, with two of those leads coming late. They allowed the Brewers to storm back, and they eventually won those games.

Flip that series in the Cubs favor, and they don't go on an 11-game skid, and maybe things would be different than where they are now. For the Cubs to get back to being the best team in the NL Central, they need to look at the Brewers model the past few seasons and how they win games. Sometimes it isn't about spending the most money, but finding the right fits for your team. That is what the Cubs need to do.