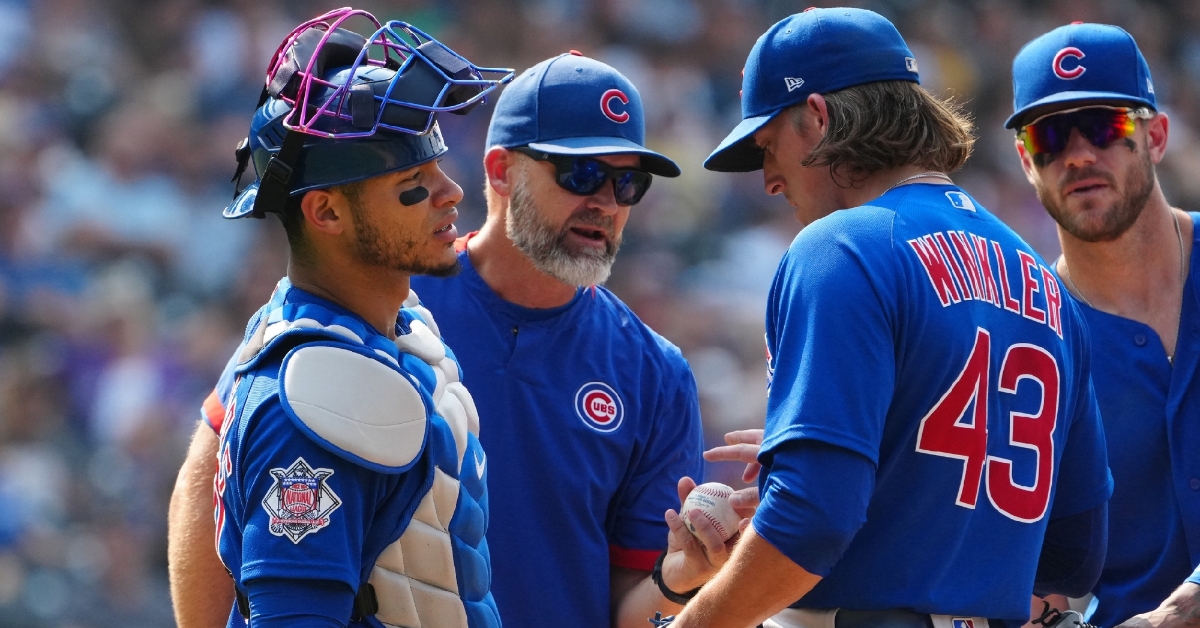 One thing Cubs fans have learned over this rough stretch is that this team will still be competitive. Even with a lack of star power that they had earlier in the season, this team is still fun to watch even if the wins are not translating.

A big reason for the fun has been the emergence of several surprising pieces this year that are not only enjoying a breakout season this season but are playing themselves into the conversation to be a starter next year. Many of those names were on display yesterday when the Cubs dropped their series finale at Colorado 6-5.

Hoping to get some momentum heading into the regular season's stretch run, Jake Arrieta had a start full of mixed reviews. Arrieta was again hit hard, allowing four runs on nine hits in just four innings of work. That line doesn't tell the entire story. In the first couple of innings, Arrieta was bitten by the long ball with Trevor Story and Connor Joe taking him deep in the first two innings to build a 2-0 lead.

Arrieta allowed a third home run in the fourth inning to Sam Hilliard to give the Rockies a 4-0 lead, but the third inning was the most frustrating. He allowed another run in that inning as the Rockies scored one run in each of the game's first four innings. However, unlike the other three innings that resulted in home runs, Arrieta was the victim of soft contact, which led to the Ryan McMahon single the opposite way. That type of inning sums up the season Arrieta has had.

While Arrieta struggled to find his rhythm yet again, Antonio Senzatela certainly didn't over the first four innings. One of the lowest strikeout rates in major league baseball, Senzatela was on top of his game, striking out six batters in a row at one point to finish the game with six strikeouts in just 4 2/3 innings. After keeping the Cubs off the board through four, they finally got to him in the fifth when they chased him before the inning was over.

It shouldn't come as a surprise that Rafael Ortega was right in the middle of it all, picking up an RBI single to get the Cubs on the board. Willson Contreras followed that up with an RBI double off the wall to score a pair before coming home on an Ian Happ single to tie the game. That tie was short-lived, with Story taking Jake Jewell deep in the bottom of the fifth to put the Rockies in front for good 6-4. Frank Schwindel added an RBI single, but it wouldn't be enough in the Cubs 6-5 loss.

How much longer for Jake Arrieta?

The Cubs have been full of disappointments this season, but none may be worse than Arrieta. After he was the best pitcher in the rotation the first five weeks of the season, Arrieta has not only been the worst on the staff since, but perhaps the worst in all of baseball.

Now 20 starts into his season, Arrieta is posting an ERA north of 6.00 with no signs of turning it around soon. That continues a trend that he was enduring in Philadelphia, which the Cubs were hoping to avoid when they brought him back. Had the Cubs been in a postseason race, there is no way Arrieta would still be in the rotation.

Given the trades this team has made, they are stuck with him for the time being, but at what point is it too much to bear. If you were to ask me, I think that time is coming, and it wouldn't shock me at all to see Arrieta be out of the rotation by the end of this month. A big reason for that is the development of Keegan Thompson and Justin Steele in AAA as they continue to get stretched back out into starters.

Been saying it a lot lately about various gents, but for different reasons …

I still love Past Jake Arrieta, and nothing will change that.

Would the Cubs pursue Trevor Story?

After the trade deadline came to a close, the one name that was surprisingly not dealt was Story. Heading into his free-agent summer, Story was viewed as a hot commodity at the deadline despite having a down year for his standards. Not only was he not dealt, but it was Javy Baez as the shortstop dealt, putting a surprising wrinkle into the offseason plans of many teams.

There is no secret that the 2021-2022 offseason will be about the shortstops as Carlos Correa, Baez, Story, and Corey Seager are all entering free agency. Francisco Lindor was on that list, but he signed a long-term extension with the Mets and has now set the bar for the shortstop class.

I feel the Mets overpaid for Lindor and that the rest of the shortstop class will be shocked to see their face value. Baez and Correa are leading the way in terms of production, but Story and Seager may bring more to the table. Baez has already said he would love to return to Chicago, but do the Cubs want him back is the question.

Should they pass on him, do they give the job to Nico Hoerner next season or keep him at second? If they keep him at second, the Cubs will need a shortstop, and Story would be an excellent fit in Chicago. He may not be as gifted defensively as Baez or some of the others, but Story is a more complete hitter who provides above-average speed too. I am not sure what the market price will be for him, but if the Cubs are interested in Story, he would be a great addition to the team.

Who is this Andrew Romine fella?

While a lot of the talk has been about Ortega and Patrick Wisdom in terms of minor leaguers showcasing their stuff, another player has emerged over the last week in Andrew Romine. The 35-year-old middle infielder has spent most of his season in Iowa, but has put up solid numbers in the process.

In 47 games with AAA Iowa, Romine was hitting .311 to go with 17BB and 32K with one homer and 11 RBIs. The power numbers were not ideal, but Romine consistently put the bat on the ball and got on base. A .237 career major league hitter, Romine has never been the best hitter, but is showing some significant skill right now.

In five games with the Cubs, Romine has gone 4-9 and has hit in four consecutive games. Not only that, but he is also coming through as a pinch hitter where he has gone 3-4 and is starting to look like Tommy LaStella off the bench. Romine is not a long-term solution for the Cubs, but the way he is putting the ball in play is something this team needs. It will be interesting to see how much playing time he gets, especially once Hoerner returns at some point this season.

?? Another Sun Devil back in the show. Congrats to Andrew Romine on joining the #Cubs! #O2V #MLBU pic.twitter.com/qID14RVMBH