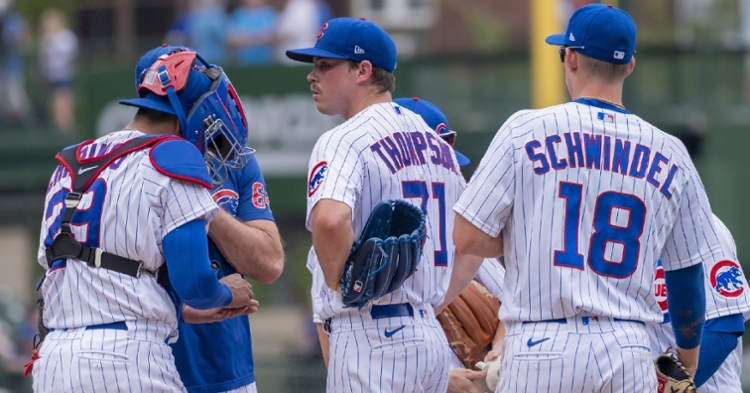 CHICAGO – On a warm and humid Saturday afternoon at Wrigley Field, the Chicago Cubs (54-71) dropped yet another series, this time to the Kansas City Royals (54-68). The loss marked the Cubs 12th consecutive loss at home, tying them for their worst stretch in franchise history. Making his much-anticipated return to the Cubs starting rotation, Keegan Thompson (3-3) faced off with lefty Kris Bubic (4-6) in what looked to be a favorable matchup for the Cubs.

Instead, it was Bubic who delivered the outing of his life no hitting the Cubs through six innings while walking two and punching out nine. If it wasn't for a lightning delay in the seventh, Bubic might have tossed a no-hitter as that brief delay seemed to take him out of rhythm. On the other hand, Thompson was coming off a four-start stretch with Iowa, where he didn't allow an earned run.

Although he did allow two runs in his four innings of work, there was a lot to like from his outing, and the future remains bright for this right-hander. Whit Merrifield continues to be the leadoff hitter the Cubs have tried to get for years as he not only led the game off with a hit but made things happen on the bases. He eventually came home on a Thompson wild pitch in the first, putting the Royals up for good 1-0.

The Royals doubled their lead in the top of the second when Nicky Lopez singled home the game's second run extending the lead to 2-0. The rest of Thompson's start saw him battle through some command issues, but overall, he did what the Cubs expected him to do and gave his team a chance to win.

Unfortunately, the defense and the bullpen let the Cubs down late, with Michael A. Taylor ripping an RBI double to center in the fifth before Merrifield showed off the wheels by stealing home in the seventh to the Royals in front 4-0. Of those two runs off the bullpen, only Michael Rucker was charged with an earned run as he struck out three in what was otherwise another great outing.

Following the lightning delay, the Cubs entered the bottom of the seventh still without a hit, but still seemed to believe they could win the game. Frank Schwindel did his best leading off the inning with a walk before Patrick Wisdom went deep for his 20th homer of the season to close the gap to 4-2. Wisdom not only collected the team's lone hit on Saturday, but has been a one-man wrecking crew this series, connecting for a pair of homers and driving in three of the four runs.

Not only was that Wisdom homer the lone Cubs hit, but those were the final baserunners of the day for the Cubs as the Royals picked up a 4-2 win to claim the series. The Cubs will look to salvage the series finale on Sunday when Alec Mills takes the ball.

Thompson is as good as advertised

Even though Thompson failed to get a win in his first start since moving to the rotation, there isn't much to complain about when looking at his outing. Yes, he may have gone just four innings, but he never went past four innings with Iowa as he continues to build back his arm strength.

Outside of some command issues early that led to a pair of runs, Thompson did what he has always done this season, giving the Cubs quality innings. These next six weeks will be critical for Thompson and the Cubs as they will get an up-close look as to what he can do in the rotation.

If all goes well, win, or lose Thompson should be looking at an opportunity to earn a starting spot next season. With the potential of joining Kyle Hendricks, Justin Steele, Mills, and Adbert Alzolay, not only will the Cubs rotation be much younger, but they will have much higher velocity across the board. Thompson is part of the first wave of pitching help coming to Chicago, which the Cubs have been waiting for.

Not only have the Cubs needed a leadoff hitter for the better part of the last four years, but Merrifield is the type of hitter this lineup could have used. What hurts the most is that this team had a legitimate shot at getting him multiple times, but the two sides never reached an agreement.

When the Cubs acquired Wade Davis from the Royals, they sent Jorge Soler back in exchange for his one year of service. Merrifield was also talked about in that deal, but the Cubs didn't want to part ways with other players at that time. Two years later, during the 2019 offseason, Merrifield to the Cubs talks heated up again, and this time it appeared like a deal would get done.

At that time, Kansas City was seeking prospect help and targeted three names on the Cubs list. Those names were Miguel Amaya, Brailyn Marquez, and Brennen Davis. Knowing what we know now if the Cubs could go back in time, I think they pull the trigger with Amaya and would have sent him their way. Instead, the Cubs missed out on his services, but the Royals signed him to a four-year team-friendly contract extension that expires after 2022.

This may not be a number fans are familiar with unless you're talking about batting average with runners in scoring position. No, this number stands for the Cubs record when they allow five runs or more in a ball game. Granted, they allowed four runs on Saturday; they did allow five runs on Friday and added to this record.

Not only is that record terrible, but it is tied for the worst record in the majors, along with the Texas Rangers. That is not the company this team wants to be in. On the flip side, when the Cubs allow less than five runs in a game that includes today, the team has posted a 49-23 record, one of the better records in the majors.

What that tells me is this, season-long struggles or not, when the pitching shows up and allows four runs or less; chances are this offense has typically done enough to make things happen. Although that hasn't been the case since the trade deadline, it is another telling tale that this core group of players was never as bad as what everyone made them out to be.