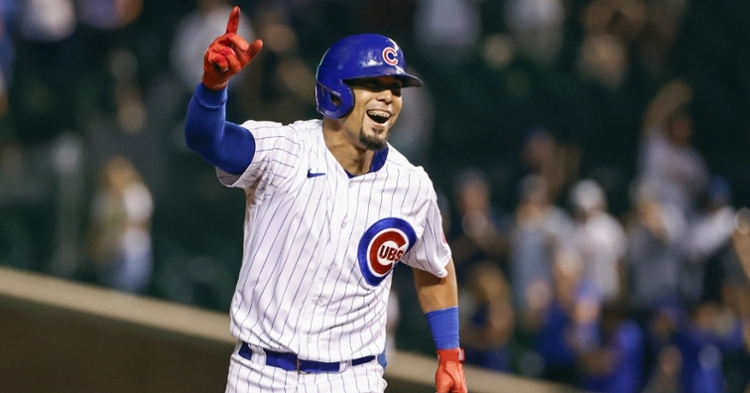 CHICAGO – 'Go Cubs Go', I remember what that song sounds like as the Chicago Cubs (55-72) dusted off the W flag Monday night against the Colorado Rockies (57-68). In a less packed house than usual this time of year, a pair of old friends returned to Wrigley Field as Aramis Ramirez and Geovanny Soto threw out the game's first pitch.

From there, it was time for the Major League leader in wins, Kyle Hendricks (14-5), to take the ball against Antonio Senzatela (2-9), who was looking for a win in the worst way. Not only does Hendricks lead the majors in wins, but in quality starts, as he entered Monday with 18 quality starts to his name. However, as good as he has been this season, the first inning continues to be unkind to him as he put his team in a huge hole early.

Not only did Charlie Blackmon put the Rockies up 1-0 with an RBI single, but Sam Hilliard followed that with a two-run single of his own as the Rockies had the Cubs down 3-0. Given how Senzatela was pitching early in the game, that three-run lead looked to be enough as David Bote nearly missed a homer in the fourth inning only to come up empty.

With Hendricks now settled in and doing his thing on the mound, the Cubs needed to find a way to score runs, especially after Ryan McMahon robbed Rafael Ortega of an RBI single in the fifth to keep the Cubs off the board. It was only a matter of time until the Cubs cashed in as they loaded the bases in the sixth to come away with just one run as Bote brought home the Cubs first run with a double play.

Still, on the mound in the seventh, Hendricks was starting to run out of gas as the hard contact was starting to come together. The Rockies would eventually push their lead back to 4-1, with Connor Joe picking up the sacrifice fly. Hendricks night came to an end after seven innings, but once again, he did his part to keep the Cubs close.

Not only do the Rockies have the worst record in baseball on the road, but their bullpen has been a nightmare which they continued to relive in the bottom of the eighth inning. With Jhoulys Chacin on for his second inning of work, the right-hander walked Ortega, Frank Schwindel, and Ian Happ on 12 consecutive pitches forcing a call to another arm.

With Carlos Estevez now summoned to pitch, Patrick Wisdom took a low and away slider up the middle to plate Ortega as the bases remained loaded and pulled Chicago within 4-2. Following another Bote double play that pulled the team within 4-3, Michael Hermosillo came up with his biggest hit as a Cub crushing an RBI double to right to tie things up 4-4.

Chicago kept that momentum going right into the ninth inning, where Jason Heyward led things off with a sharp single up the middle, putting the go-ahead run on base. With one down and facing a 3-2 count, Ortega got a slider up in the zone, and he didn't miss taking it over the right-field fence for his seventh of the season as the Cubs walked off the Rockies 6-4 to end the 13-game home losing streak.

Thank God for the Rockies bullpen

As bad as the Cubs offense looked most of the night offensively, they never felt like they were out of it. A big reason for that is the Rockies bullpen, or should I say lack of a bullpen, as that continues to be the team's Achilles heel.

Since the beginning of 2017, the Rockies pen has finished no higher than 20th in the league and have compiled a 5.78 ERA over the past four years. That includes an ERA near seven this season, as they are ranked 29th in the league this year. From the moment Bud Black went to the pen, you could see a sense of confidence in the Cubs hitters as if they knew they were going to win.

Not only were the Cubs making hard contact, but the Rockies did them plenty of favors by not throwing strikes consistently. This was the kind of fight the Cubs have lacked for the better part of two months, with Ortega delivering the first walk-off homer in two years.

Hendricks will continue to get overlooked, but the right-hander has been Mr. Consistency for quite some time. Entering Monday leading the majors in wins and quality starts, Hendricks continued to go about his business giving the Cubs seven solid innings and keeping his team in the game.

Gutsy outing from Kyle Hendricks. Gave up 3 runs on 4 hits and an HBP in the 1st inning and recovered to throw 7 innings.

Departs with Cubs down 4-1.

Things have not gone well for Happ this season, and you could argue that since September of 2020, Happ has been on a significant downside. Even with his batting average still under .200 for the season, things are trending upward for Happ, which is a positive sign going forward.

Not only did Happ collect three more hits tonight, but that marks two-three hits games in his last seven after having only two before that all season. The power is also starting to show itself again, as is his eye at the plate. All that together translates to an impressive stretch of play that has Happ looking like the 2020 version of himself.

Going back to 2019, Happ spent most of the season in the minor leagues after having a dismal spring training. Once he was called up in late July, Happ saw significant improvement in his overall game, which led him to be one of the best hitters in the game in September. That then carried over to 2020, where he was the Cubs best offensive player for much of the year.

Given what Happ has shown across the past two weeks, signs are pointing to him having a strong finish to 2021, much like he did in 2019. However, what that means for the future is a much bigger question as the Cubs will have a tough decision to make on him. The better he plays down the stretch, the better his chances are to coming back in 2022.

The second 3-hit game for @ihapp_1 in the last 7 days! pic.twitter.com/1Ci8zzEmYH