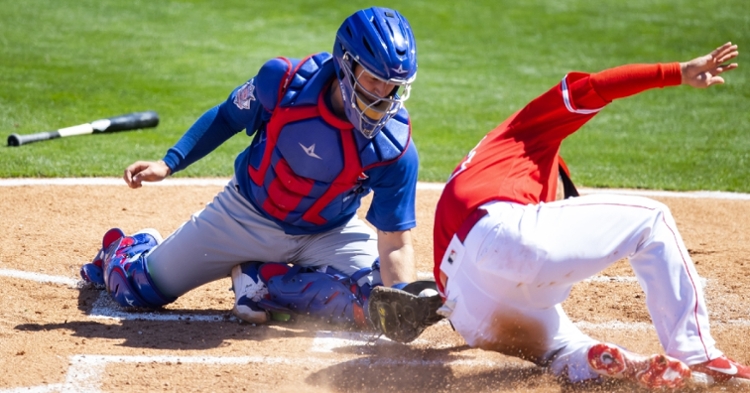 After an unbeaten week last week, the Cubs started a new week with a thud dropping a road contest to the Angels 15-7. A blowout loss was bound to happen at some point, and it took the Cubs long enough for that to happen. Hopefully, this doesn't carry over to the regular season, and this was just a case of one bad game.

Even though the Cubs had many regulars in their lineup, they elected to go with top 20 prospect Keegan Thompson who will start seeing more appearances as minor league camp opens. After a few good outings earlier this Spring, Thompson struggled in his 1 1/3 inning, allowing four earned runs on five hits before yielding to Juan Gamez. All in all, a 10-run second inning is what did the Cubs in, and they couldn't recover.

Things were not all bad, however, with Ian Happ opening the game up with a bang. His leadoff homer was the second in as many days for the Cubs, and they had a quick 1-0 lead. That lead was short-lived, with Jared Walsh coming home on a Thompson wild pitch ahead of an Anthony Rendon RBI single to give Anaheim a 2-1 lead. The Angles never trailed from that point forward as they completely took over in the second inning.

Not only did Thompson struggle in the second, but Gamez and Robert Stock also as the trio allowed 10 runs in that half of an inning. While Walsh and Trout traded outs for RBI's, the Angles picked up RBI doubles from both Justin Upton and Trout ahead of RBI singles from Kurt Suzuki, Dexter Fowler, and David Fletcher to give Anaheim the 12-1 lead.

With that inning out of their system, the Cubs were looking to get going in the third with Happ getting things started again with a walk. Willson Contreras then went the opposite way for an RBI triple before coming home on a Joc Pederson RBI groundout to make things 12-3. Following scoreless innings from Ryan Tepera and Rex Brothers, Rendon got into a Jason Adam fastball and launched it over the left-field fence to make things 13-3.

Now, 14-3, the Cubs bats started to put some nice at-bats together in the top of the eighth with hopes of clawing back. Patrick Wisdom started the inning off on the right foot as he too went deep to left for the solo shot. Singles by Brennan Davis and Ilderamo Vargas had the Cubs in business before a Matt Duffy double made things 14-5. Vargas would then come home on a passed ball, cutting things to 14-6.

Whenever the Cubs appeared to be gaining momentum, the Angels took it right back as they managed to push across a run of Jake Jewell in the eighth to push the lead to 14-6. Miguel Amaya delivered the game's final run in the top of the ninth with his first homer of the Spring, and the Cubs dropped their first game in a week 15-7.

With Andrew Chafin the lone lefty in the Cubs pen, Chicago is looking to add one, if not two more, before the season starts. Kyle Ryan would have been a lock, but without having thrown a pitch this Spring, Ryan has been optioned to AAA, where he will begin the season.

After not only missing last season but missing the start of camp, Brad Wieck has finally gotten into some spring training action and, for the most part, has looked good. If that continues the next week, he is an option. However, the one lefty not named Chafin who has earned a spot on this team is Brothers.

Signed to a minor league contract this winter, Brothers not only received an invite to Spring but has taken that on by storm. After another, no hit two strikeout performance today, Brothers ERA remains at 0.00 for the Spring, and he has the most strikeouts among relievers. He should be on the roster after spring.

If Cubs go with 2nd lefty in the bullpen (beyond Andrew Chafin) the decision looks to be down to Rex Brothers or Brad Wieck.

Flush the loss down the toilet

As mentioned above, most of the Cubs games this season have been competitive, and when they lose, they haven't lost by much. Today was not one of those cases as the Cubs laid an egg, and it was the type of game that was bound to happen sometime.

A big part of that was because Chicago elected to go with a minor league starter instead of someone else, but the bullpen did them no favors early on. Take away that first inning, and the Cubs win this game 6-5, so there is some silver lining to what went on. There is nothing that film can do for this game except to flush it down the toilet and forget it ever happened.

The youngsters continue to impress

While there are many great stories this Spring, and rightfully so, it has been great seeing a lot of the prospects take the field this Spring. With no minor league season in 2020, it has been over a year since many of these players have seen competitive action, so just seeing game action at this point is excellent.

Brennan Davis continues to display great instincts and defense while showing power potential. Chase Strumpf has continued to build on what most have said was an impressive instructional league last fall, and Miguel Amaya is showing he is close to being ready for an MLB job. Amaya belted his first homer of the Spring in the ninth inning and should start seeing more playing time in the coming weeks.

Regardless of some of these prospects' stats, it is great to see them on the field once again, especially after losing a year of action. They will only get better with time, and the future is bright for the Cubs again.