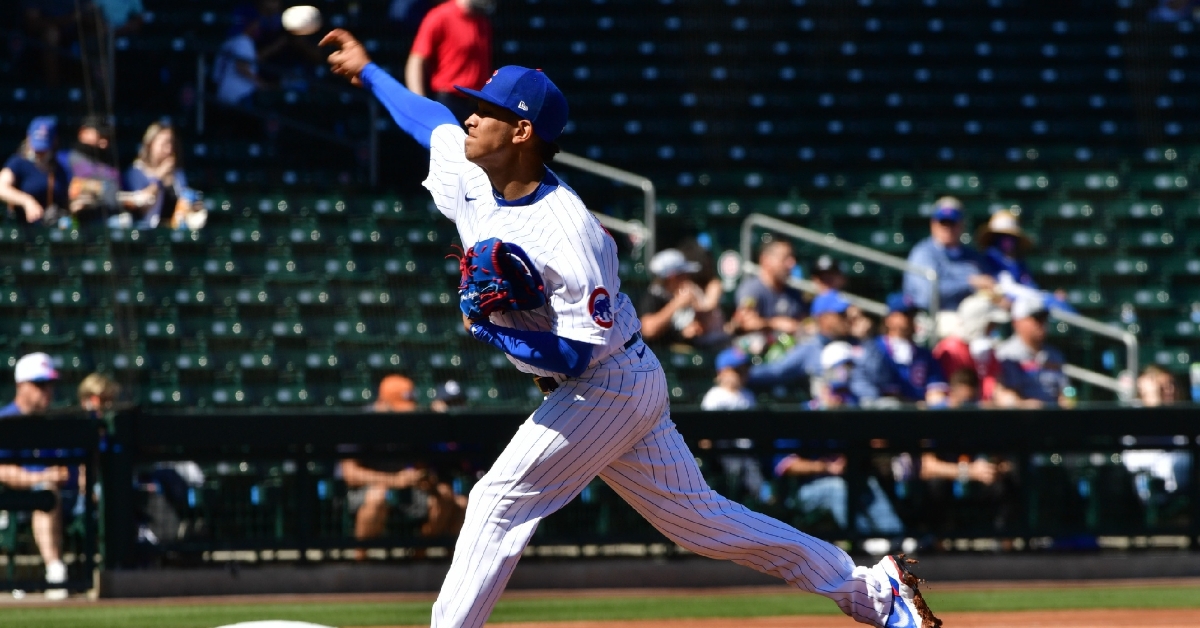 After starting the spring off with a band, the Cubs have cooled off a bit, falling to 6-5-1 after their second straight defeat. The latter of those two losses came at the hands of Kansas City on Saturday as they made quick work of the Cubs 10-2.

Battling for the final spot in the rotation, Adbert Alzolay made his third appearance and second start this spring. Considering that he has options left in the minors, Alzolay could be ticketed to open the season in Iowa, especially after his last two outings. In just 1 2/3 innings, Alzolay allowed two earned runs on three hits to go with one walk and two punchouts. This was following an outing where he allowed three earned runs in one inning of work.

Offensively, the Cubs were kept primarily quiet, with all their damage coming in the second inning. A leadoff single from Cameron Maybin was followed up by an Ilderamo Vargas two-run homer giving Chicago the 2-0 lead. Vargas is competing with Eric Sogard for the backup second base job and continues to hit the ball well this spring.

Kansas City not only took the lead for good in the bottom of the frame but did so by scoring 10 unanswered runs to finish the game. Former Cubs LF Jorge Soler jumped all over an Alzolay offering sending it over the left-field fence for the solo shot. Kansas City was able to take the lead off Dillon Maples later in the inning as an error allowed two runs to score to give the Royals a 3-2 lead.

Soler wasn't done having an excellent game against his former mates, adding an RBI double in the third to push the lead to 4-2. With Kohl Stewart now on the bump, the struggles continued with an Andre Benintendi RBI double. He later came home to score on an error as Kansas City was now in front 6-2.

While most of the Cubs pitchers struggled to get outs on Saturday, Michael Rucker was hit the hardest as he allowed three earned runs off four hits in the sixth to give Kansas City a 10-2 lead. The Cubs could not get anything going in the seventh as they fell to the Royals 10-2 for their second straight loss and third in their last four games.

Ugly defense leads to a bevy of runs

With the softest throwing staff in baseball, the Cubs pride themselves on great defense. No one does a better job of converting ground balls into outs than the Cubs, and they were awarded an inaugural team gold glove award last season.

While their defense has been, for the most part, as good as advertised this spring, Saturday was not one of those days as the Cubs committed four errors. Those errors ultimately led to three unearned runs as the Royals jumped all over the Cubs early and often.

This is the part of the spring when you get a sense that Players are going through the motions and are getting ready for the season to start. Regardless, they still need to focus if they expect to win games consistently.

Vargas leading the way for a reserve spot

Coming into spring 2B was a question mark as to what the team would do. Given the spring Nico Hoerner has had, that is no longer a question as he will be the starting second baseman out of camp, barring an injury. The Cubs do as a backup remains to be both Eric Sogard and Vargas competing for that spot.

Sogard is someone you would love to have on your roster, but given he came into spring late this season, he may not have enough time to impress manager David Ross. On the other hand, Vargas is undoubtedly impressing, and if I had to bet anything, I would say he is the favorite to grab the backup second base job out of camp.

He is another one of those players out of options, but he is crushing the ball this spring to a .429 average. The switch-hitting utility infielder not only plays second but gives the Cubs options at 2B, SS, and 3B. That will allow this team to put him in a position to succeed as he appears to be ready for a strong season.

As the Cubs continued to add pitchers to their rotation, Alzolay was one of those guys eager for a shot at proving his worth. Battling with Alec Mills for the final spot in the rotation, the Cubs were going to give him every chance possible this spring to win the job.

Unfortunately, the consistency that has plagued him his entire career continues to show up, and he is now behind Mills in terms of the favorite for that spot. Not only that, Alzolay has options, so the Cubs may elect to send him to AAA to open the season to keep him fresh.

The problem with that is AAA is now starting May, which means Alzolay wouldn't be getting innings all April. That is one way to monitor his innings but not the way to go about his development. I also could see the Cubs putting him in the pen to start the season and letting him take over as the season goes on. Whatever Ross is thinking, it should be decided in the next week or so.