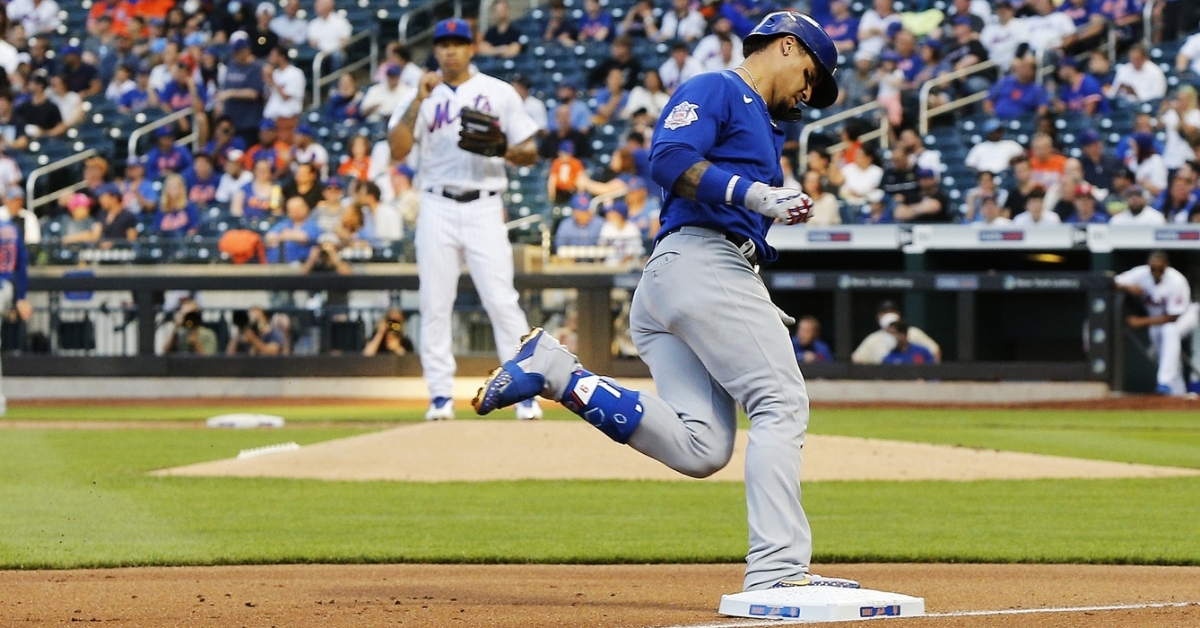 NEW YORK — After scoring just two runs via a pair of solo homers in Monday's series opener versus the New York Mets (34-25), the Chicago Cubs (38-29) again scored only two runs against the Mets on Tuesday. This time, the two runs were scored via a two-run blast hit by Javy Baez. Taijuan Walker started on the mound for the Mets and racked up a career-high 12 strikeouts. The Cubs had an opportunity to even the score in the ninth, but Jake Marisnick was gunned down at the plate, leading to the North Siders, who struck out 15 times, falling 3-2 at Citi Field.

Walker, who was ejected in a start against the Cubs earlier in the season, was shaky out of the gate, giving up a leadoff single to Joc Pederson and hitting Kris Bryant with a pitch. Bryant remained in the game for the time being but was pulled with a right hand contusion in the second inning. After allowing the first two batters of the game to reach, Walker tallied two straight strikeouts and was then taken for an infield single by Willson Contreras. However, Ian Happ struck out swinging to leave the bases loaded.

Alec Mills made a spot start on the hill for the Cubs, marking his first start in over two months. Baez provided him with some run support by drilling a 409-foot jack out to right-center in the top of the third, thereby breaking the scoreless tie. Patrick Wisdom, who replaced Kris Bryant in the lineup, singled prior to that and was plated by Baez's home run. Baez appeared to tweak something on a swing in one of his later plate appearances, yet he played the entire game. Contreras nearly went yard with two outs in the third, but Dominic Smith caught the drive to deep left as he jumped into the wall.

The Mets tied the Cubs at two runs apiece in the bottom of the third, thanks to a two-out rally. Jonathan Villar was walked with one out but was then outed at second on a fielder's choice that Francisco Lindor grounded into. Lindor reached third on an ensuing shift-beating double by Smith and proceeded to come home, along with Smith, on a game-tying two-run single by Pete Alonso. Mills struck Billy McKinney out swinging to end the inning. Both pitchers worked around leadoff singles in the fourth, and Mills was later relieved with one out in the fifth.

Villar chased Mills from the game with a one-out single, and Lindor then singled off Rex Brothers. Smith collected a walk to load the bases, and Villar scored after that due to a sacrifice fly by Alonso. Brothers fanned McKinney to usher in the sixth. Rafael Ortega replaced Ian Happ in the lineup after Happ struck out swinging to end the top of the sixth. Keegan Thompson tossed a scoreless bottom of the sixth, but Walker went 1-2-3 through the seventh, retiring 12 batters in a row to close out his stellar outing.

We take the lead! #LGM pic.twitter.com/fmZh2nXDm3

Despite giving up a leadoff double to Villar, Thompson prevented the Mets from tacking on any insurance runs in the seventh. Lindor walked following Villar's two-bagger, but Thompson bounced back and recorded three consecutive outs. Seth Lugo sat the Cubs down in order in the top half of the eighth, and Daniel Winkler worked a scoreless bottom half of the eighth. Winkler walked James McCann to lead the half-inning off and got taken for a one-out single by Luis Guillorme.

Thereafter, Anthony Rizzo made a savvy decision by allowing a popped-up bunt, which came on a sacrifice attempt by Lugo, to fall right in front of him so that the Cubs could turn two. Rizzo fired a throw to Baez at second for the first out, but Sergio Alcantara, who covered first with Rizzo on the infield grass, was unable to corral Baez's throw. The play was ruled a fielder's choice, and Rizzo showed off his defensive prowess once more in the very next plate appearance. Wisdom charged a slow roller hit toward third by Villar and made a low throw to Rizzo, who was able to scoop up the throw while falling down and keeping his back foot on the bag, thus ending the inning.

Rizzo was not able to show out at the plate in the ninth inning, though, as he led off with a groundout. Contreras then singled off Lugo, and Marisnick ran for him. Sogard pinch hit for Winkler, and hit single in the cap between right and center. Marisnick was sent home by third-base coach Willie Harris, and Kevin Pillar made a throw to Villar from center field, with Villar then firing a relay throw home and McCann applying the tag at the dish. Sogard advanced to second on the throw to the plate. Jason Heyward then fell down 0-2 before working a walk, but Alcantara struck out swinging to end the game, with the Mets hanging on for a 3-2 victory.