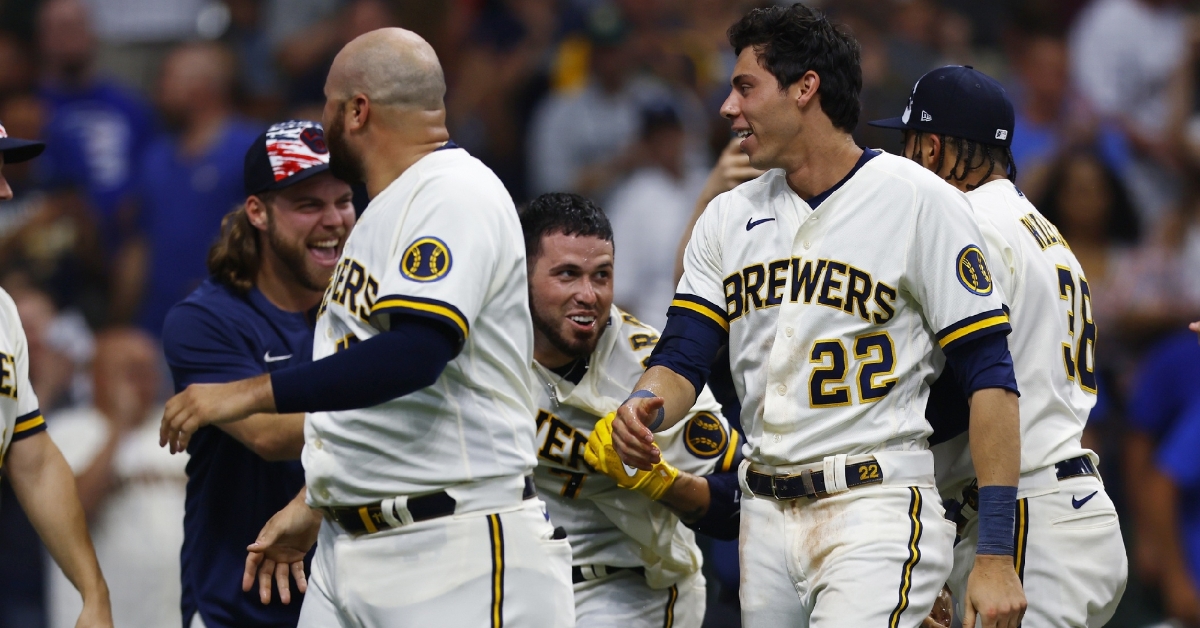 MILWAUKEE - If you want to be the best, you have to beat the best, which is what the Chicago Cubs (32-48) are up against this week. This team has a date with the NL-best Los Angeles Dodgers, and the Cubs opened the week against the Milwaukee Brewers (47-35).

While leading the NL Central again, Milwaukee has dominated this series since the end of 2018, and that alone is why they have been a playoff team, and the Cubs haven't. Despite two teams going in opposite directions, the Cubs have given the Brewers some good battles this season, and it continued on Monday.

In a matchup that pegged left-handers Justin Steele and Eric Lauer against each other, both teams struggled to score runs and finished the ninth inning tied 2-2. With extra innings set to decide another outcome for the Cubs, a former teammate got the last laugh with Victor Caratini hammering a walk-off three-run shot against Scott Effross to hand the Brewers a 5-2 win.

Steele was the tough-luck loser in this one, even though he did earn a no-decision. His ERA may still be above 4.00 at 4.13, but he has pitched much better the last month, giving the Cubs a 2.54 ERA over his last five starts. Monday saw Steele go to a whole new level as he gave the Cubs 6 2/3 innings of one-run, two-hit ball while throwing a career-high 108 pitches. Steele did walk four, but struck out nine as he was on point.

Lauer was equally as good, which continues to be a trend for all season. Granted, his ERA has risen to 3.84 over his last few starts. Lauer matched Steele pitch for pitch going six innings of his own and allowing just one run on two hits, walking two and striking nine.

Through the first two innings, both pitchers allowed minimal baserunners, with a first-inning walk being the lone run for each man. That was until the third when the Cubs grabbed the lead first, with Nelson Velazquez hammering his first career homer to left for the 1-0 Cubs lead.

That would be it for the Cubs offense for most of the game, with Ian Happ picking up a fourth-inning double for the last hit off of Lauer. With Steele cruising through four innings, it was in the fifth when he ran into a bit of trouble when the Brewers put a pair of runners on base only to come away empty.

Typically, when facing the Brewers, you need to have great pitching if you want to win. Steele gave the Cubs great pitching and managed to one-up Lauer through six innings to keep the game 1-0. Fresh off the IL, Seiya Suzuki had a great game picking up a seventh-inning single before his big hit came later.

Although not a great offensive team, the one thing that stands out about the Brewers offense is their clutch hitting which is why they are a first-place club. Trailing by that 1-0 score in the seventh, you could see Steele starting to tire, and the Brewers looked to use that to their advantage.

With two down in the inning, Keston Hiura worked a walk to keep the inning alive before one of those clutch hits showed up. This once came off the bat of Pedro Severino, whose double made things 1-1. Steele would walk one more hitter in that inning before yielding to Brandon Hughes to take care of the rest.

Heading to ninth and with the game still tied, the Cubs saw a familiar face in Josh Hader, who was looking to continue his dominance against the Cubs. However, for the first time in a long time, it was the Cubs sizing him up, with Suzuki providing some early excitement with an inside-the-park homer off the center field fence to give the Cubs a 2-1 lead. Nico Hoerner followed that up with a double, but the Cubs couldn't score anymore, which would prove costly.

David Robertson, who has been solid all season, was looking to close things out. This was not one of his better outings, with Urias leading things off with a single before advancing to third on the Hiura double. Add in a Kolten Wong hit by pitch, and the Brewers had the bases loaded with two outs and the dangerous Christian Yelich at the plate.

Although Robertson made great pitches to pitch around Yelich, he couldn't get the job done as a bases-loaded walk tied the game up 2-2 and sent things to extra innings. In the extra frame, the Cubs wasted a golden opportunity that doomed them in the end.

Not only did Rafael Ortega pick up a single, but a one-out walk from Christopher Morel gave the Cubs a bases-loaded situation with one down. Like most instances this season, the Cubs seem to disappear when they need a hit, and Brad Boxberger struck out the next two to keep them off the board.

The Cubs sent one of their most consistent relievers in Effross to the mound for the bottom of the tenth, and he was on the verge of working out of a two-on-two-out jam. Needing to make one pitch to get the game to the 11th, it was Caratini with the last laugh as he unloaded on an Effross pitch to deposit it over the fence handing the Cubs a walk-off 5-2 loss.