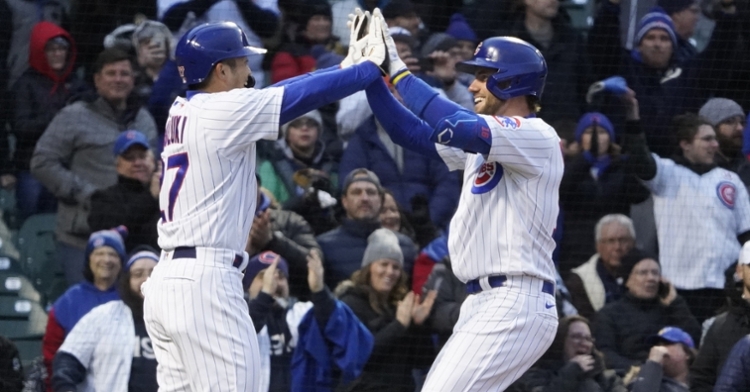 CHICAGO - I know this is a small sample size, and a lot can change, but 10 games into the MLB season, the Chicago Cubs are sitting at 6-4. Should they keep that pace up all season long over 10-game increments, they would win 96 games. No one believes they will keep this pace up all season, but it is nice to see a competitive team.

Not only have they gotten off to a great start, but they are doing this without Kyle Hendricks being himself. Thankfully their new-look offense has picked up the slack as they rank in the top five in most offensive categories. Looking to keep things going against the Tampa Bay Rays (5-6), the Cubs were back in front of the Wrigley Field crowd for the beginning of a seven-game slate.

In less than ideal conditions with a strong wind coming off the lake and near-freezing temperatures, Hendricks was looking to bounce back from a terrible outing as he opposed Shane McClanahan. Hendricks was good, but did have trouble putting hitters away as he needed 90 pitches just to get through 4 1/3 innings of work. Because of that, he was not able to qualify for the win as he allowed two runs on five hits to go with two walks and six punchouts.

While he may have had an issue putting hitters away, Keegan Thompson didn't and hasn't had a problem all season long. Thompson came in to relieve Hendricks and gave David Ross 3 2/3 innings of work, allowing just one hit to go with five strikeouts. Thompson earned his second win while he still hasn't allowed a run.

McClanahan was also outstanding on the mound, giving Tampa Bay six-strong innings and allowing just two runs on four hits, with only one of those runs earned. He also didn't walk a batter while striking out a career-high nine. One thing the Cubs have done exceptionally well this season is scoring first.

After failing to score in the first, that trend would continue with the Cubs getting on the board first. A costly error allowed Seiya Suzuki to reach first before Patrick Wisdom unloaded for his first homer of the season and the 2-0 lead. Wisdom has been coming on strong in his last five games and continued that with a long home run into the wind.

Despite the high pitch count, Hendricks was mowing the Rays down over the first three innings as his pitches had plenty of movement. That was until the fourth inning when things began to come unglued a bit. Josh Lowe led things off with a single and then stole second. That set things up for Ji-Man Choi, who made things 2-1 with an RBI single.

One inning later and same story with Brett Phillips leading the fifth off with a single before advancing to second on a walk. Several pitches later saw Lowe come through with an RBI single as he not only tied the game up 2-2, but chased Hendricks in the process as Thompson was thrown into a tough spot. There is a reason why Thompson has yet to give up a run as he came in to induce an inning-ending double play as the Cubs escaped without further damage.

Still tied in the seventh, former Cub Jason Adam entered the game as he replaced McClanahan on the mound. Things didn't start well for Adam as he hit Suzuki on the elbow and then walked Jonathan Villar to put a pair of runners on base. Suzuki continues to do his thing at the plate, picking up a pair of hits while reaching base four times.

With two down and both those runners on base, Ian Happ came through with a clutch hit to left, ripping a single off Jeffrey Springs to give the Cubs a 3-2 lead.

Before tonight, the last time the Rays played at Wrigley Field was 2017.

With Thompson continuing to deal in the eighth and retiring the Rays in order again, the Cubs received another huge insurance run, with Frank Schwindel going deep for the second time this season.

Leading 4-2, it was time for former Ray David Robertson to come into the game as he was looking to lock down his fourth save. Although Robertson isn't your typical high-velocity closer, he knows how to pitch and continued to do his thing by retiring the Rays to secure his fourth save in as many chances. Robertson has still yet to allow a run and is starting to show he may be back to his pre-2018 form.

Another player who is starting to heat up is Nick Madrigal, as he led the offense with two hits. Suzuki joined him with two hits, as his average rises to north of .400. Happ, Wisdom, and Schwindel added the other hits as those hits provided the four runs for the Cubs offense.

David Ross on Keegan Thompson and his scoreless outing. pic.twitter.com/MWvRpMGuwV