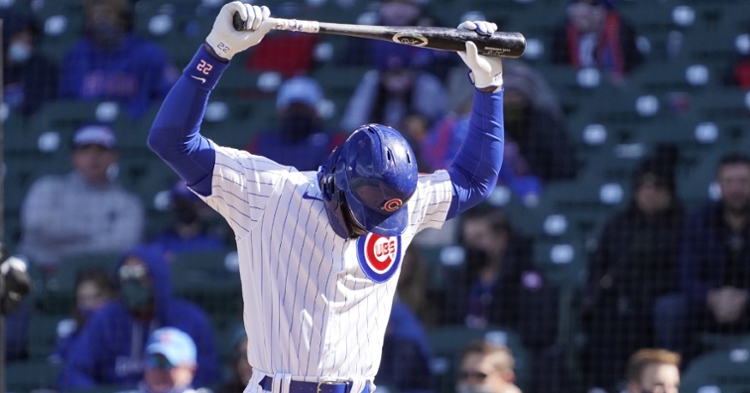 CHICAGO — With the game on the line, Joc Pederson stepped up to the plate in the bottom of the ninth with two outs and the bases loaded. Reliever Will Smith struck Pederson out swinging, though, and the Atlanta Braves (6-8) came away with a 5-2 win over the Chicago Cubs (5-8). David Ross served a one-game suspension on Friday, which served as Jackie Robinson Day at Wrigley Field, and Kyle Wright started on the mound for the Braves after Drew Smyly was scratched from the start due to injury. Bench coach Andy Green served as the Cubs' skipper on the day.

Wright pitched fairly well but struggled with his command at times, hitting batters four times in his 4 1/3 innings on the mound. Following a leadoff single by Ian Happ in the first, Willson Contreras was hit by a pitch for the fifth time on the year. The Cubs eventually sported men on second and third with one out but were unable score. Javy Baez was hit by a pitch to kick off the bottom of the second and made it to third on a base knock by Jason Heyward. Baez then scored on a sacrifice fly by Eric Sogard.

Zach Davies allowed three straight hitters to reach base with two outs in the third. Freddie Freeman scored on a bloop hit by Travis d'Arnaud to even the score. After that, Sogard made a nice catch in the 3-4 hole to rob Ozzie Albies of a hit. A two-out rally by the Braves in the fourth featured Guillermo Heredia and Wright, who doubled in previous at-bat, scoring on a single by Ronald Acuna Jr. A few plate appearances later, Baez fell while corralling a hard-hit grounder off the bat of Marcell Ozuna, and Contreras was unable to corral Baez's throw home, resulting in Acuna scoring. Ozuna was credited with an RBI single on the play.

Gotta go back and touch the plate just to be sure ??#ForTheA pic.twitter.com/LJh0kxfqqV

Baez was once again hit by a pitch to begin the bottom of the fourth. He proceeded to steal second but was left stranded. Matt Duffy was also hit by a pitch in the scoreless half-inning. The top of the fifth ended with a "strike 'em out, throw 'em out," as Jason Adam rang up Heredia before Contreras fired to third and caught Dansby Swanson stealing. Contreras then made an impact with the bat, walloping a 415-foot jack beyond left field and onto Waveland Avenue to lead off the bottom of the fifth.

Pedro Strop struck d'Arnaud out swinging to end the top of the sixth and leave runners on first and third deserted. David Bote was caught stealing after drawing a two-out walk in the sixth. Albies doubled off Dillon Maples to begin the seventh. He then took third on a wild pitch and scored on a sacrifice fly hit by Ehire Adrianza. Pederson made a great catch in left to rob Freeman of a leadoff hit in the eighth. Pederson then hustled for a leadoff single in the bottom half of the inning, which was overturned from an out call following a replay review.

Pederson did not score in the eighth, though, and Albies was forced to exit the game after being hit on the right leg on a pitch that got away from Justin Steele in the ninth. The Braves' Ender Inciarte departed the contest earlier in the action after pulling up lame while running the bases. Three walks by Smith loaded the bases in the bottom of the ninth, but Pederson ended up swinging and missing at strike three after having a 2-0 count to work with. As a result, Atlanta won the opener of the three-game series versus Chicago 5-2. In the loss, the Cubs went 0-for-8 with runners in scoring position.