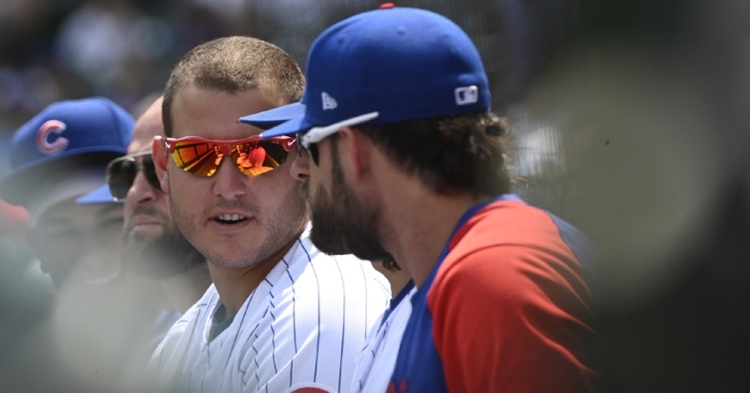 CHICAGO — With the trade deadline looming and Kris Bryant and Anthony Rizzo not in the starting lineup, the Chicago Cubs (50-54) wrapped up a four-game set at Wrigley Field versus the Cincinnati Reds (54-49) on Thursday. In a game that may have represented the end of an era for the North Siders, the Cubs powered out three home runs, including Willson Contreras' longest bomb of the Statcast era, but lost 7-4. Joey Votto set a franchise record by hitting his sixth homer of the series, the most ever hit by a Reds player in a series versus the Cubs. He has also now homered in six consecutive games, another franchise record.

Votto's long ball came in his first at-bat of the afternoon, as he walloped a 431-foot two-run jack off Alec Mills in the first frame. The two-out blast to right-center plated Jesse Winker, who doubled earlier in the inning. Rafael Ortega and Willson Contreras hit singles in the Cubs' first two plate appearances of the contest. Patrick Wisdom then grounded into a 5-3 double play, and Contreras was stranded at second when Javy Baez struck out to end the inning.

Luis Castillo walked Ian Happ to begin the bottom of the second but then forced Matt Duffy to ground into a 6-4-3 double play. Wisdom put the Cubs on the board with leadoff jack to left-center in the fourth. Castillo kicked off the fifth with his second single of the day. The Cubs turned a 6-4-3 double play thereafter, with Jonathan India grounding into it. Following a two-out walk of Ortega in the fifth, Contreras smacked a jaw-dropping 464-foot jack that bounced off the top of the batter's eye. The two-run go-ahead bomb, which placed the Cubs ahead 3-2, featured some showmanship from Contreras, who lingered in the batter's box and got chewed out by Castillo as a result.

Kyle Farmer and Votto hit back-to-back singles to start off the sixth. Wisdom, who made a rare start at first, then committed a fielding error that enabled Tyler Naquin to reach base. Eugenio Suarez hit a ground ball to Duffy at third, and Duffy threw home for a force out. Naquin and Votto scored on an ensuing base knock by Tucker Barnhart. Shogo Akiyama singled to load the bases. Castillo then bunted into an inning-ending 1-2-3 double play that concluded Mills' start, which featured zero strikeouts and zero walks.

In the home half of the sixth, a leadoff single by Baez was followed by a "strike 'em out, throw 'em out" double play, as Baez was thrown out attempting to steal second after Happ struck out. Trevor Megill gave up two singles to begin the seventh, with India and Winker getting on base. India scored from second on a double from Farmer, and Winker was able to cross the plate due to an error by Baez, who was unable to hang onto the throw from the outfield.

That glove is gold for a reason. pic.twitter.com/HqXYGwnlIP

Tack on ?? more for the @Reds pic.twitter.com/kYXRws7vxk

Kyle Ryan relieved Megill and benefitted from three straight defensive feats. Bote robbed Votto of a hit with a diving stop between first and second, and Ortega then gloved back-to-back sliding catches in left-center. The first sliding grab prevented Aristides Aquino from coming up with a hit, but Farmer tagged up and scored from third on the play. Former Cub Brad Brach retired the seventh-inning side in order. Ryan had the chance to hit and grounded out at the end of a hard-fought 10-pitch at-bat.

Ryan and Jake Jewell, who was just called up earlier in the day, combined to pitch a scoreless top of the eighth, and Mychal Givens struck out the side in the bottom of the eighth. Jewell walked Winker and gave up a single to Farmer at the start of the ninth but recovered by striking the next three batters out swinging. Happ skied an opposite-field solo shot with one out in the ninth. The dinger off Heath Hembree carried just over the wall in left. The Cubs lost 7-4 soon afterward, with Bryant and Rizzo never entering the game. The Reds took 3-of-4 in the series.

Ian Happ with his 10th HR of the year.