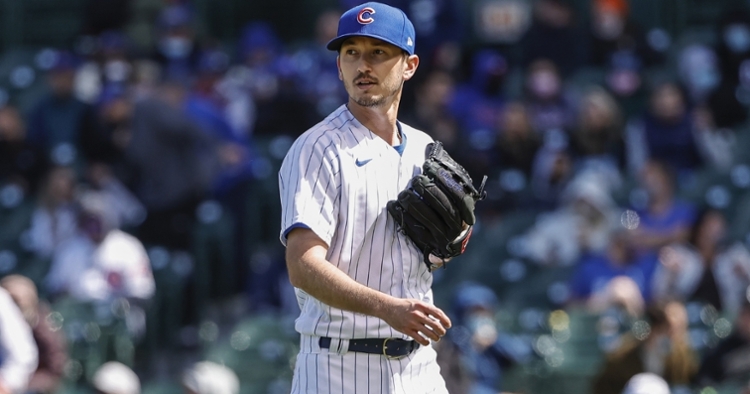 CHICAGO — Through eight innings at Wrigley Field on a windy Friday afternoon, the Chicago Cubs (16-16) had complete control of their contest versus the Pittsburgh Pirates (13-18). With the wind blowing in throughout the contest, the Pirates struggled offensively until the top of the ninth, when they scored two runs and loaded the bases with two outs before the game ended on a bases-loaded flyout. The Cubs, who have now won four in a row, tallied one run in each of the first three innings and eked out a 3-2 win in the opener of a three-game series at Wrigley Field.

Zach Davies started on the bump for Chicago and produced his best outing as a Cub by tossing seven scoreless innings. The Cubs provided Davies with early run support by scoring three early runs off Trevor Cahill. Joc Pederson led off the bottom of the first with a single to the opposite field and made it around to third via a pair of groundouts. Phillip Evans then dropped a fly ball hit near the wall up the right field line by Anthony Rizzo, with the error enabling Pederson to score.

Ope, almost had it. pic.twitter.com/nksGVI2SRm

David Bote tabbed a base knock in the second, and Davies moved him to second with a sacrifice bunt. An RBI single by Pederson plated Bote, with Evans potentially aiding the Cubs once again by not charging the ball, which might have been catchable. With a runner on first in the ensuing inning, Cahill's sacrifice attempt resulted in a bunt single. The Buccos remained scoreless, though.

Baez reached out and hit a tapper that made for an infield hit in the third. Baez was caught straying too far from the bag by catcher Jacob Stallings, who made the boneheaded decision of throwing to second base, which allowed Baez to safely return to first. Rizzo singled thereafter, with Baez moving to second, and both runners then advanced on a wild pitch thrown by Cahill. A sacrifice fly from Matthew Duffy plated Baez, putting the Cubs up 3-0.

Davies was not so successful when attempting to advance Bote to second with another sacrifice bunt in the fourth. Instead, Bote was thrown out. Kris Bryant and Baez hit back-to-back singles to begin the bottom of the fifth, but Rizzo grounded into a 4-6-3 double play after that. Willson Contreras grounded out to end the inning. Rizzo made several solid plays at first base on the day, specifically a diving stop and a pick of a bouncing ball thrown by Baez.

Davies produced perhaps the most important defensive highlight of the game, however, when he barehanded a chopper with no outs and the bases loaded in the seventh and fired it to Contreras at the plate for a force out. The very next at-bat saw Davies glove a grounder and start a 1-2-3 double play to escape the jam and conclude his stellar start on a high note. Another botched Pittsburgh pickoff attempt in the seventh saw Pederson retake first base when he could have easily been tagged out. He pressed his look again soon afterward but was tagged out in a rundown that time around.

Andrew Chafin, who pitched a scoreless eight, gave up a leadoff single to Colin Moran in the ninth and was subsequently relieved by Ryan Tepera. Stallings hit a ground rule double with one out, and Moran then scored on an RBI groundout by Adam Frazier. A wild pitch advanced Stallings to third base, and Ka'ai Tom ushered Stallings home with an RBI single. Rex Brothers took the mound at that point and was on the wrong end of a bloop hit recorded by Wilmer Difo, which moved Tom to third. Frazier was hit by the first pitch he faced, thus loading the bases, but Brothers maintained the lead by forcing Bryan Reynolds to fly out on a full count, thereby salvaging the Cubs' 3-2 victory.