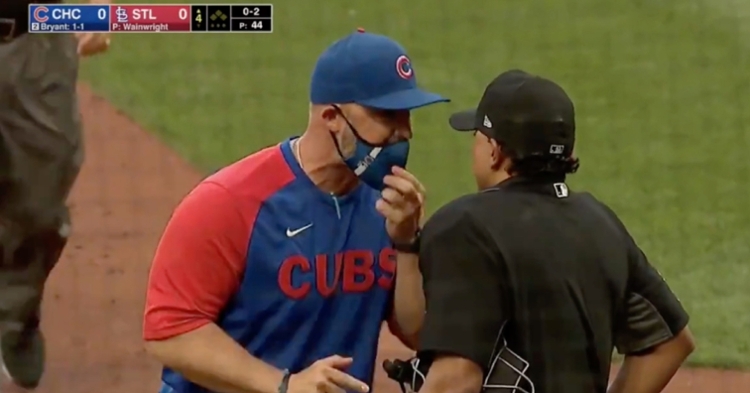 The on-field microphones picked up some rather coarse language coming from an irate David Ross.

ST. LOUIS – Ejected for the second time this season and third time in his managerial career, Chicago Cubs skipper David Ross was tossed by home plate umpire Erich Bacchus on Sunday. The ejection occurred with the Cubs and St. Louis Cardinals tied 0-0 in the top of the fourth at Busch Stadium.

Ross was warned by Bacchus earlier in the game, as Ross voiced his displeasure with Bacchus' strike zone from the dugout. Ross was thrown out with Cubs right fielder Kris Bryant at the plate. The second-year manager was not pleased with some of the borderline strike calls that Cardinals starter Adam Wainwright benefitted from in the early goings.

Ross was likely peeved that Cubs starter Zach Davies was not receiving similar strike calls, and he let Bacchus hear about it with a fiery tirade after marching onto the field upon being ejected. Bacchus is 30 years old and in his just his second season as an MLB umpire, so Ross took the opportunity to lecture the young ump about his questionable strike zone.