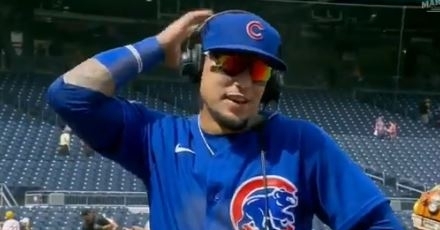 Baez's play was the talk of the game

The Chicago Cubs got the 5-3 victory to collect the three-game sweep of the Pittsburgh Pirates on Thursday.

However, the talk on both teams was the insane baserunning of Javy Baez that led to a run scored by Willson Contreras in the third inning.

Baez spoke to Cubs announcers J.D. and Boog after the game to discuss how he makes so many special plays on the basepaths.

Baez added the following quote in the postgame interview with the media.

“I’m pretty good at tagging and not letting people tag me.”

How does Javy do what he does?

Here is the video of the unique play: