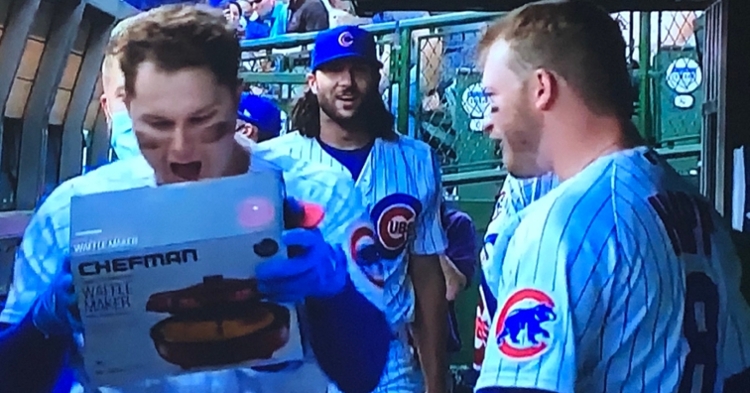 Joc Pederson was thrilled to receive a waffle maker after hitting his first home run as a Cub. (Credit: @SLGreenberg on Twitter)

CHICAGO — Per recent Chicago Cubs tradition, left fielder Joc Pederson was rewarded with a waffle maker after hitting his first home run as a North Sider. The left fielder walloped a 417-foot solo shot in the eighth frame on Wednesday, thus tying the Milwaukee Brewers at one run apiece, and received a present upon returning to the dugout. The dinger also happened to be Pederson's first hit with the Cubs.

Pederson was fired up after going yard at Wrigley Field, and he was even more excited once Cubs center fielder Ian Happ surprised him with a brand-new waffle iron in the home dugout. The symbolism of the waffle maker remains a mystery, but it has become a staple of home run celebrations for the Cubs in recent seasons and perfectly encapsulates the quirkiness of Happ and other fun-loving members of the Cubs' clubhouse.

Joc Pederson hit a home run and was presented with a waffle maker. Why?

Because baseball is weird. ?? pic.twitter.com/bCwcmapic8

Joc Pederson hits his first #Cubs home run and — following a custom as old as the game itself — is rewarded with a new waffle iron. pic.twitter.com/6V6Dy4WzLX