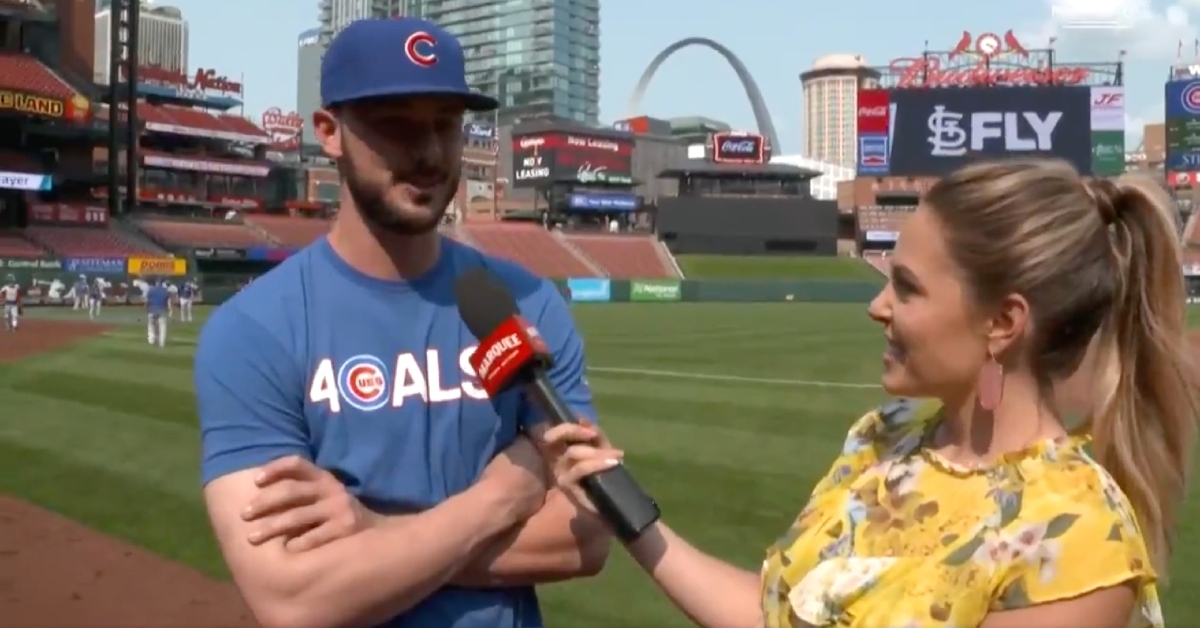 In an interview with Taylor McGregor, Kris Bryant credited his wife, Jessica, with helping make his baseball career a success.

ST. LOUIS — "I definitely wouldn't be as good of a ballplayer as I am if it wasn't for her."

That heartfelt quote provided by star Chicago Cubs third baseman Kris Bryant to Marquee Sports Network reporter Taylor McGregor sums up the special bond that Kris has with his wife, Jessica. McGregor interviewed Kris prior to Monday's contest between the Cubs and St. Louis Cardinals at Busch Stadium, and a topic of discussion was Bryant's marriage.

"She's everything to me," Kris said of Jessica. "She's a wife [and] a mom. She's like my coach, too, because she's really been there for me since before I was really even good at baseball."

High school sweethearts, the Bryants met as freshmen at Bonanza High School in Las Vegas and began dating as sophomores. Kris cites his sophomore season at Bonanza as his breakout year and told McGregor that it was what caused him to realize that he had a bright future in baseball. With that being said, Kris credits Jessica with helping him come into his own as a baseball player and considers their relationship instrumental to his longstanding success in the sport.

"She's seen all the highs and the lows and all the stuff that I put in my head and the anxiety and the stress and the pressure that I put on myself. If I'm my best coach, she's my second-best coach."

The Bryants have been married since 2017, and their young son, Kyler, was born in 2020. The touching interview evinced just how close Kris and Jessica are and revealed the significant role that their relationship of approximately a decade and a half has played in Kris' growth and development on and off the baseball field.

"She keeps me in check, keeps me humble and puts me in place when I need to be put in my place. In terms of a life partner, that's all you can really ask for from them, and she's been my rock from day one."

“I definitely wouldn’t be as good of a ballplayer as I am if it weren’t for her.” -@KrisBryant_23 on @Jess__bryant ??#Cubs pic.twitter.com/DQAjX5nMSk