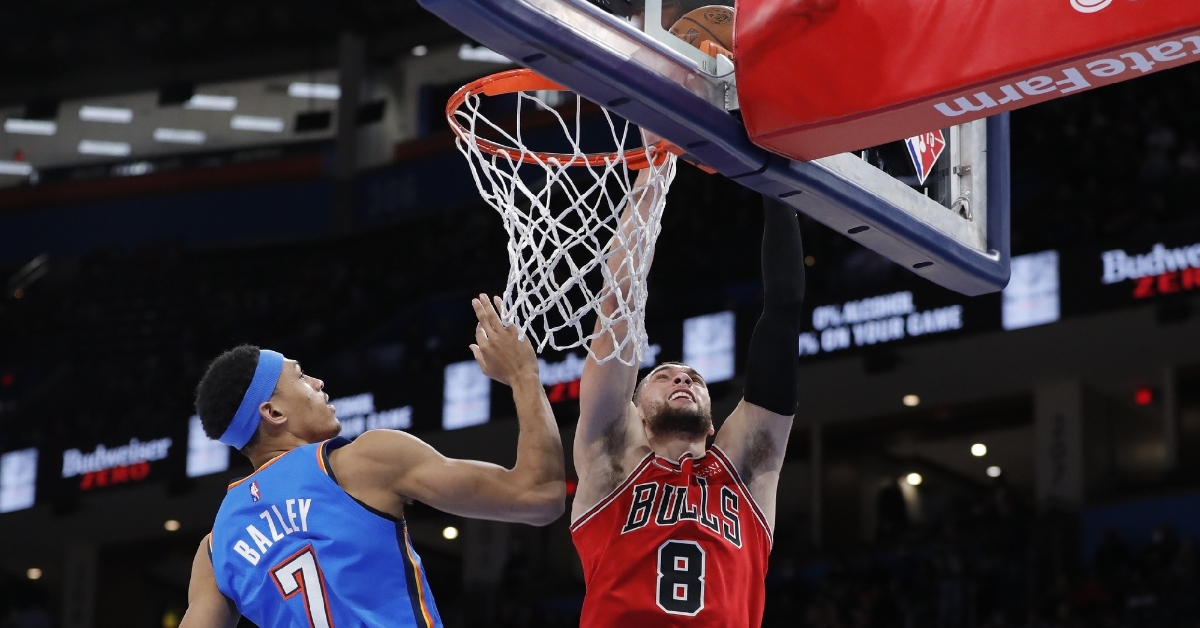 OKLAHOMA CITY – The best way to respond from a beatdown loss is to get back on the court and forget that it happened. That is what the Chicago Bulls (29-17) were looking to do as they took on the Oklahoma City Thunder (14-33) for the second leg of a back-to-back. Even before the game got underway, the Bulls were dealt a tough blow as DeMar DeRozan was ruled out for the game.

Don't worry, Bulls fans; he is not injured, but instead was given a rest day after dropping 41 points the night before. On the flip side, the Bulls also received some great news as not one, but two players returned to the lineup after missing several games. Javonte Green is one thing, but Zach Lavine is another and having his presence in the lineup is always a good thing.

Despite a rusty night in terms of shooting the ball, Lavine still was efficient enough as he returned to the lineup to drop 23 points. He wasn't alone in having a big night as Chicago had plenty of offensive balance in their starting lineup. Nikola Vucevic looked like the players the Bulls traded for last season as he led the team with 26 points while adding 15 rebounds.

These are the games he was accustomed to while with the Orlando Magic, but they haven't come as frequently in his second season with the Bulls. Make no mistake, Vucevic is still a great player and can carry this team offensively when called upon. Joining Lavine and Vucevic was Ayo Dosunmu, who continues to play well in the starting lineup.

The second-round pick continues to look like a steal as he dropped a career-high 24 points to go with eight assists. 18 of those points came in the first half, in which the Bulls raced out to a 10-point lead and had the Thunder guessing. Chicago didn't have a ton of production outside those three, with Troy Brown Jr adding the final double-digit line with 10 points.

Coby White came close with night points, but dealt with a terrible shooting night that saw him make just one three. That three proved too critical as the Bulls needed that bucket to hold off a charging Thunder team in the second half. Trailing by 14 after three quarters, the Thunder not only started to come back in the fourth but dominated that final quarter to make a game of things.

Shai Gilgeous-Alexander had a monster second half, scoring 19 points, with 12 coming in the third quarter. That helped him finish with 31 points as he led all scorers in the game. The Thunder may not have had another 20-point scorer, but they did have plenty of production from several other players.

Luguentz Dort added 16 points to go with seven rebounds, while Mike Muscala added 14 points off the bench. Jeremiah Robinson-Earl chipped in with 12 points giving the Thunder four legitimate options on the offensive end. Even with the Bulls leading by eight late, the Thunder refused to give up as they closed within one possession in the closing moments.

Following three free throws from Green and Lavine, the Thunder trailed by four with less than five seconds to go as they needed a miracle to complete the comeback. That miracle nearly game with Muscala hitting a three at the buzzer, but it wasn't quite good enough as the Bulls held on 111-110 for the win.

This wasn't just a win for Chicago, but it was a happy homecoming type of win. In his second season with the Bulls, Billy Donovan began his NBA coaching career with the Oklahoma City Thunder, leading them to the playoffs all five years, including one Western Conference Final.

Returning to the city that gave him his first NBA gig, Donovan holds Oklahoma City close to his heart and loves returning there for games. Although things may not have been easy, Donovan and his team did what they needed to do as they picked up a big win after needing one in the worst way.

A breath of fresh air

This has been a season of horrors for the Chicago Bulls as they can't seem to get rid of the injury bug. Going back to the third game of the season, Chicago has dealt with injuries and has been the most injured roster in the league this season. Most of those injuries haven't been long-term, but that hasn't been the case recently, as several players have been lost for the next few months.

However, things started to take a turn for the better on Monday, with Green and Lavine returning to the lineup. With DeRozan getting the night off, Chicago fans will have to wait one more night for their dynamic guard duo to return to the court together, but there is some help on the way, and it is coming in a big way.

When the Bulls took Dosunmu in the second round, many thought Chicago had the biggest steal in the draft. Heading into the draft night, Dosunmu was viewed as a lottery pick projected to be taken somewhere in the 9-14 range. Yet, despite all those projections and an outstanding junior season, Dosunmu fell to the second round, where the Bulls made sure to snatch him.

Now that they have him, the hometown kid is having the time of his life and has firmly supplanted himself as a significant piece of the future. From his tenacious defense to his fearless offensive mindset, Donovan has applauded the play of Dosunmu and has said he is playing beyond his years in this league.

He has primarily been the Bulls sixth or seventh man this season, but has seen himself in the starting lineup with Ball on the shelf. That move seems to be the perfect decision for this team as he does everything Ball does and is a better offensive player. The better he plays in the starting lineup, the longer he remains, which will make this team better come April.