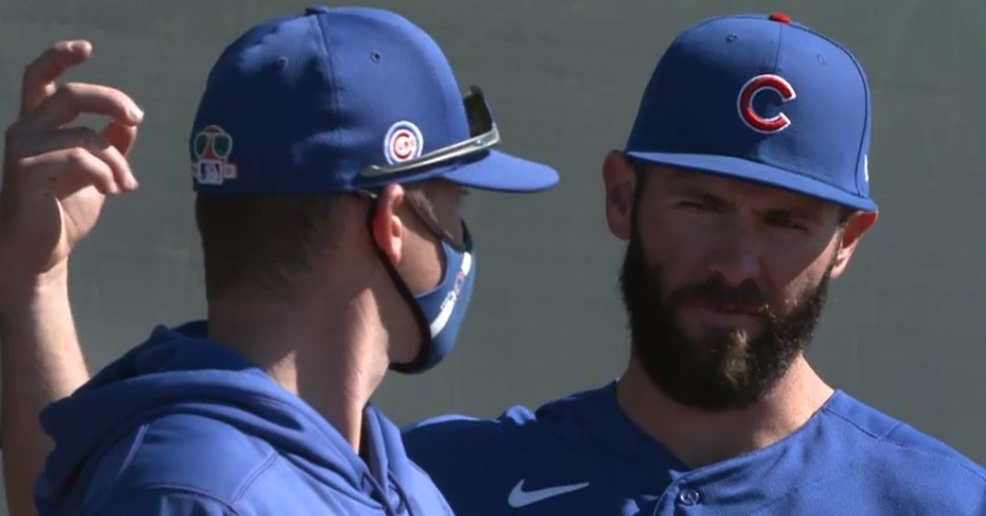 Cubs baseball is back!

Such a glorious return after a very difficult 2020 year for everybody.

Friday's workout was headlined by Jake Arrieta with veteran closer Craig Kimbrel getting some reps in the workout.

Here is a great pic of veteran pitcher Jake Arrieta giving some guidance to youngster Adbert Alzolay at the latest practice.

Another pic of Arrieta watching some of the different pitchers during their workout:

Pretty funny tweet how Cubs fans reacted to this offseason with the loss of Jon Lester but the addition of Arrieta:

More pics from Friday's camp session with the Cubs including a first look at veteran closer Craig Kimbrel this year:

Kimbrel told the media he feels excited for his work this offseason and excited.

"If I can physically get to where I need to be, everything else will come together. I feel like I'm ready to go. I felt like it was a good offseason."

He thinks he is in a much better place this season.

"A lot of what I got out of last year was understanding that I can make a difference even if I'm not the best I can be on the field. I can still make a difference for the guys around me working through certain things."

He is slotted in left field to replace the power production of Kyle Schwarber who is now a member of the Washington Nationals.

Check out Friday's workout video for the Cubs, courtesy of the Marquee Sports Network.

It's HAPPening for young Cubs outfielder Ian Happ as he won his arbitration case against the Cubs and he will be making $4.1 million in 2021. Hey Happ! I need to borrow some money.

This is only the third time that a Cubs player has won an arbitration case against the team:

Veteran outfielder Cameron Maybin has re-signed with the Cubs on a minor league deal. He brings versatility as he can play all three outfield positions and a solid clubhouse guy.

Kris Bryant appears to be with the Cubs to start Opening Day as the rumors have finally slowed down with the Mets and other teams.

An interesting look at Chicago's wintry mix from above, courtesy of Wrigley Aerials:

Sorta wild tidbit that only Anthony Rizzo and Mike Borzello remain from the 2012 Chicago Cubs team:

Cubs catcher Willson Contreras continues to do good things in the community, this time with this Special Olympics video:

Plunge, plunge, plunge for the home team! Like @WContreras40 said, it's away to make a difference in the lives of #SpecialOlympics athletes in Illinois. Sign up at https://t.co/eSYA221KF7 to help build a world of inclusion. #BeBoldGetCold #choosetoinclude @Cubs @SpecialOlympics pic.twitter.com/q4XmeDFMbx