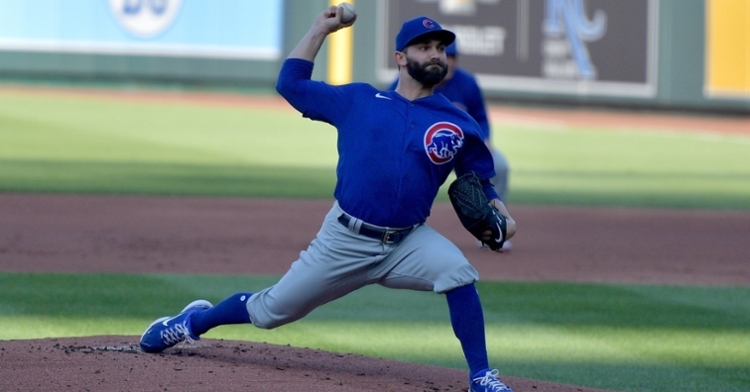 KANSAS CITY, Mo. — Suffering their first blowout loss of the season, the Chicago Cubs (10-3) failed to go 4-0 in a four-game stretch against the Kansas City Royals (4-10). The Royals, who were swept in a two-game series at Wrigley Field in Chicago earlier in the week, split the two-game set at Kauffman Stadium, trouncing the Cubs 13-2 on Thursday and ending Chicago's six-game winning streak.

Pitcher Tyler Chatwood was roughed up in a short-lived start for the Cubs, giving up eight runs on 11 hits in 2 1/3 innings. For the Royals, Brad Keller, who overcame COVID-19 last month, made his first start of the season and pitched five scoreless innings. The Royals opened the floodgates in the bottom of the third, scoring six runs to go up 9-0 and never looking back. Every member of the Royals' initial batting order collected at least one hit over the course of the romp. As for the Cubs' offense, the North Siders failed to score until the ninth inning and were outhit 18-7 overall.

T1: Javier Baez got on base via a two-out single but did not advance beyond first.

B1: Former Cub Jorge Soler recorded the first hit of the evening for the Royals. Soler's base knock was the first of three straight singes in the inning. Ryan O'Hearn plated Soler from third via an RBI single.

T2: The Cubs went down in order in the second.

B2: Maikel Franco led off with a double and was later scored by a two-run homer off the bat of Whit Merrifield.

T3: Aside from Ian Happ drawing a walk, the Cubs did not generate any offense in the third.

B3: Chatwood came unglued in the bottom of the third. Adalberto Mondesi and Alex Gordon hit back-to-back doubles, and Mondesi scored as a result of Gordon's two-bagger. Franco followed that up with a two-run round-tripper. After an ensuing single, Nick Heath batted an RBI double, marking his first career hit. Chatwood then issued a walk and was subsequently removed from the game. Duane Underwood Jr. entered the game in Chatwood's wake and was unable to escape the inning without facing the Royals' wrath. In the aftermath of a double steal, Soler pushed a run across with a groundout, and Salvador Perez drove in the sixth and final run of the inning on a double.

It is physically impossible to watch @inheathwetrust's celebration on his first big-league hit without smiling.

T4: With one out, Kyle Schwarber walked, and Willson Contreras singled thereafter. Victor Caratini hit a two-out single that loaded the bases before Nico Hoerner grounded out.

B4: Reflecting the lopsided score, Cubs manager David Ross made several substitutions prior to the bottom of the fourth. Underwood was composed in his second inning of work, going three up, three down.

T5: The Cubs failed to reach base in the fifth, which was Keller's last time out.

B5: Underwood was on the wrong end of a pair of two-out doubles. Perez and O'Hearn hit RBI two-baggers in consecutive at-bats, resulting in Underwood getting taken out.

T6: Chicago's offense remained listless in an uneventful top half of the sixth.

B6: Ryan Tepera, who replaced Underwood on the hill, tossed a scoreless bottom half of the sixth.

B7: Cubs reliever Dan Winkler forced Merrifield to hit into a double play but then got taken deep by Soler. The solo shot carried 413 feet out to center field.

T8: Happ hustled for an infield single to lead things off in the eighth. However, David Bote grounded into a double play a few plate appearances later.

B8: Struggling Cubs closer Craig Kimbrel was given an opportunity to fix some of his issues in a no-pressure situation. He got off to a rocky start, giving up a leadoff triple to Brett Phillips and proceeding to issue a base on balls. Gordon scored Phillips with a base knock to the outfield, but Kimbrel was able to finish the inning, as the Royals hit into two groundouts before Heath struck out swinging.

T9: With Kevin McCarthy toeing the rubber for the Royals, the Cubs avoided getting skunked by notching two runs in the ninth. Josh Phegley was hit a by pitch, and Schwarber singled after that. Interestingly, Ross had starting pitcher Alec Mills pinch hit. Due to Caratini changing from designated hitter to first baseman during the game, Kimbrel was set to bat in the ninth before Ross sent Mills in his place. Following a popout by Albert Almora Jr., Mills struck out looking. With two outs, Caratini and Hoerner hit an RBI single apiece. The game ended with Heath making a fantastic catch while crashing into the center field wall, thus robbing Happ of an extra-base hit. Thankfully, after writhing on the ground in pain, Heath was able to get back to his feet and jog off the field.

Up Next: The Cubs will remain in Missouri to take on the rival St. Louis Cardinals (2-3) at Busch Stadium. St. Louis has not played since Wednesday, July 29, because of a COVID-19 outbreak within the team that resulted in two of its series getting canceled. Set to face off against the Cardinals for the first time this season on Friday, Aug. 7, the Cubs will send lefty Jon Lester (1-0, 0.82) to the mound. Righty Jack Flaherty (1-0, 2.57) will start on the bump for the Cardinals. The opener of the three-game series figures to be played under clear skies on a hot night in St. Louis.