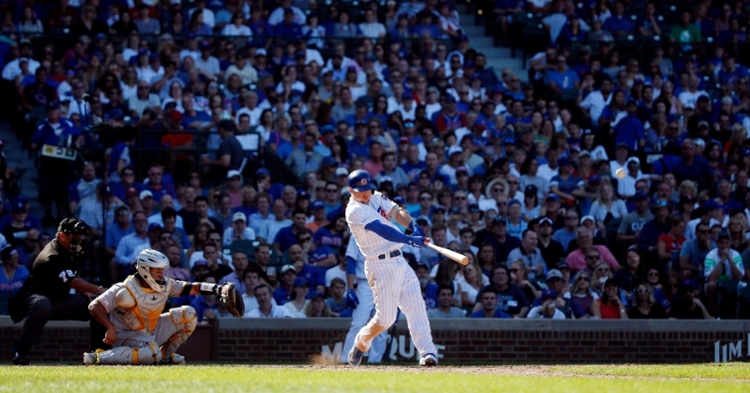 CHICAGO — After scoring 17 runs in Friday's series opener, the Chicago Cubs (80-68) did not let up in the second installment of their 3-game series versus the Pittsburgh Pirates (65-84). Tallying 14 hits, including four home runs, the Cubs also amassed 14 runs in a beatdown of the Buccos on Saturday. Led by Kris Bryant and Nico Hoerner, who both homered and recorded three total hits apiece, the North Siders won 14-1 at Wrigley Field and established a new franchise record in the process.

Prior to Saturday, the record for home runs hit in a single season by a Cubs team was 235, which the 2004 squad racked up. However, that record was broken in the Cubs' 13-run trouncing of the Pirates, with Hoerner's sixth-inning blast marking the 236th round-tripper of the year for the Cubs. Playing in just his sixth career big-league game, Hoerner collected three RBI by way of his record-breaking 3-run bomb. James Marvel started on the mound for the Pirates and was far from a superhero, as he gave up seven runs on nine hits in four innings of work. For the Cubs, Kyle Hendricks toed the rubber and was taken for just one run in six innings pitched.

At the plate, the Cubs thrived with two outs in the series opener, and that carried over into Saturday's contest, as 12 of the Cubs' 14 runs were scored with two outs. Chicago went up 4-0 in the bottom of the second thanks to a pair of 2-out hits. Nicholas Castellanos, who is the major-league leader in doubles, came through with the bases loaded by slapping a bases-clearing double to left field. Then, Bryant hit an RBI bloop single to the opposite field that scored Castellanos. Marvel was taken deep by Ben Zobrist in the bottom of the third, with Zobrist drilling a solo shot for his first homer since August of 2018.

The Pirates got on the scoreboard via a sacrifice fly in the top of the fourth, but the Cubs dominated the rest of the way. With two outs in the bottom of the fourth, Bryant lofted a 2-run jack after Castellanos batted another double. Anthony Rizzo ushered two baserunners home with a 2-out single in the bottom of the fifth, which led to Pirates reliever Clay Holmes entering the game. The Cubs have a beef with Holmes that was incited earlier in the 2019 season because of Holmes' tendency to throw high and inside. To be fair, practically the entire Pirates pitching staff regularly pitches high and inside, but Holmes worsened his reputation with the Cubs by hitting three batters on Saturday.

In fact, Holmes hit the first two batters whom he faced, with Castellanos and Bryant getting beaned in back-to-back at-bats following Rizzo's aforementioned 2-run base knock. Bryant's hit by pitch forced in a run, and a pitch in the dirt from Holmes nearly led to another run scoring. Rizzo tried his luck at barreling home from third base when the bad pitch was thrown, but he was tagged out after the catcher recovered the loose ball and threw it to Holmes, who applied the tag to end the inning. During his sixth-inning plate appearance, David Bote attempted to duck out of the way of an inside pitch from Holmes, but it pummeled his shoulder. Bote was furious with Holmes after getting plunked, voicing his displeasure while the dugouts partially emptied.

Holmes' command did not improve, and it culminated in Hoerner hammering the milestone 3-run round-tripper off Holmes for his second tater in as many days, thereby putting the Cubs up 13-1. Capping off the Cubs' dominant offensive showing, Victor Caratini led off the bottom of the seventh in a pinch-hitting spot and ripped a solo shot out to right field. The blowout did not end quietly, though, with Holmes' mistakes costing Cubs reliever Dillon Maples in the top of the ninth.

Hoerner hits the Cubs' 236th home run of 2019, a franchise record for most in a single season! pic.twitter.com/FLav3KivHO

Channeling Holmes, Maples, who was recently called up from the minors, had a difficult time hitting his targets, which resulted in two Pirates batters being beaned with pitches. Both of the off-mark pitches were breaking balls that were very clearly unintentionally thrown at the opposing hitters. Regardless, Maples was ejected by the home-plate umpire after the second hit by pitch, as warnings had previously been issued to both dugouts following Bote's tirade. Cubs manager Joe Maddon was also ejected, which is standard procedure when a pitcher is ejected for throwing at a batter once warnings have already been issued.

Interim bench coach Chris Denorfia, who played for the Cubs as an outfielder in 2015 and was filling in for full-time bench coach Mark Loretta, finished off the ninth inning as the Cubs' skipper, and Derek Holland entered out of the Cubs' bullpen to draw the remaining outs. With the 14-1 victory in the books, the Cubs will aim to sweep the Pirates in Sunday's series finale after compiling 31 runs through the first two games of the series. As for the Pirates, their blowout loss on Saturday officially eliminated them from playoff contention.