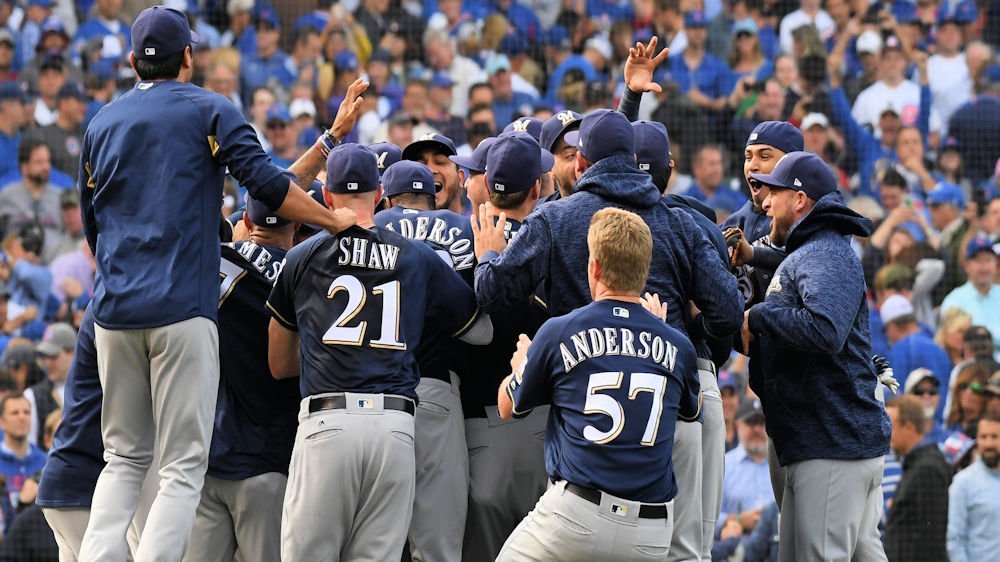 CHICAGO — Despite amassing a grand total of 95 wins over the course of the regular season, the Chicago Cubs will be forced to settle for a wild card in the 2018 MLB postseason. Taking on the Milwaukee Brewers in a tiebreaker for the National League Central crown, the Cubs garnered just three hits on their home field and were done in by a disastrous outing from reliever Justin Wilson.

Due to the Cubs and the Brewers both finishing the 162-game slate at 95-67, a tiebreaker took place at Wrigley Field on Monday afternoon, with the Cubs getting the right to host the game because they won the season series with the Brewers. Obtaining only three hits and three walks, the Cubs failed to show up the plate for the vital contest, and, as a result, they fell to the Brew Crew 3-1 and missed out on the division title.

Cubs starting pitcher Jose Quintana was decent on the day, giving up one run on six hits in five innings pitched. Milwaukee struck first, though, as right fielder Christian Yelich drove home a run with a two-out base knock in the third.

The September NL Player of the Month is getting a jump on those October stats. #ThisIsMyCrew #ThisIsMyMVP pic.twitter.com/gN895yd1kp

Shortstop Orlando Arcia led the inning off with a single and eventually came home to score on Yelich's hit. Arcia stepped up in a major way on Monday, experiencing the first four-hit game of his career. Meanwhile, Brewers hurler Jhoulys Chacin no-hit the Cubs through four innings before Chicago first baseman Anthony Rizzo broke up the no-hit bid with a monstrous home run. The 429-foot solo jack to right marked Rizzo's 25th dinger of the year, and it knotted the Brewers up at 1-1. Blazing off the bat at 110 miles per hour, the dinger left the yard in such a hurry that Yelich did not even bother to move in right field after Rizzo made contact.

In a battle of MVP candidates, Yelich outmatched Cubs infielder Javier Baez. Going 3-4 to secure his batting title, Yelich finished one RBI behind Baez to barely miss out on the Triple Crown, as he also sits one behind Nolan Arenado of the Colorado Rockies in home runs. Baez, on the other hand, went 1-4 with two strikeouts.

The Cubs had a decent chance to take the lead in the sixth after Chacin was pulled with two outs and nobody on base. Chicago picked up a single and a walk off Chacin's replacement before veteran reliever Joakim Soria came in and struck Baez out swinging to put an end to the threat.

Betcha he’s Soria he didn’t get a bat on this pitch. #ThisIsMyCrew pic.twitter.com/pWr34Itkk5

The Brewers took advantage of the missed opportunity by picking up a two-run lead in the eighth. Wilson started the inning on the bump and gave up a single and a double in his only two at-bats. Steve Cishek entered in Wilson's wake and got taken for an RBI single by Lorenzo Cain.

Following another pitching change, Randy Rosario struck Yelich out, but he was yanked after facing just one batter. Cubs pitcher Brandon Kintzler then entered and allowed a seeing-eye single to center that was hit by longtime Brewer Ryan Braun.

On top 3-1 after Braun's RBI single, the Brewers held onto their lead by way of a solid two-inning performance on the bump by fireballer Josh Hader. Other than giving up a two-out single to Baez to cap off a tough nine-pitch at-bat in the ninth, Hader was flawless. With Baez at second base after a fielder's indifference, Rizzo flied out to end the game and relegate the Cubs to a wild-card berth.

The Brewers (96-67) took an aggressive approach at the plate in their 3-1 victory over the Cubs (95-68), as they manufactured 12 hits but drew zero walks. Going 0-2 with runners in scoring position and grounding into two double plays, the Cubs did not take advantage of hardly any of their offensive opportunities. Brewers reliever Corey Knebel tallied the win to improve to 4-3, and Wilson accrued the loss to finish the season at 4-5. Hader tabbed his 12th save.

With the win, the Brewers earned their second-ever National League Central title and secured home-field advantage throughout the National League playoffs. As for the Cubs, they missed out on their chance at winning the division for the third year in a row and will instead be forced to play in a single-elimination wild-card matchup on Tuesday night at the Friendly Confines.