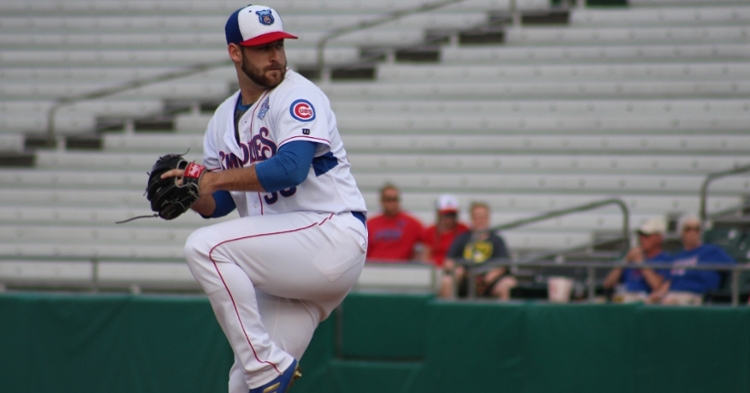 When the initial 60-man Taxi roster was released, the Cubs had 39 players in big league camp with another 11 sent to South Bend. That left 10 spots to be filled prior to the July 24th opening day with Milwaukee. Hernan Perez was added earlier this week to the South Bend squad bringing the roster to 51.

Now, it looks as if the roster is about to row to 55 players as there are reports out that the Cubs will be adding four of their minor league arms to the South Bend squad. While nothing has been made official to this point, judging by multiple reports including Cubs Insider, it seems as if these four names have all but confirmed they are heading to South Bend.

Right Handers Cory Abbott and Tyson Miller will join lefties Justin Steele and Jack Patterson in South Bend as the roster will now be up to 55 players. That leaves just five spots to fill which we should start seeing plenty of action over the next week of workouts to get to that magic number 60.

When looking at these four names, Abbott should come as no surprise to anyone given the season he put together for AA Tennessee last year. The 24-year-old has had an up and down Minor League career with the Cubs but burst out to have a career season as the Tennessee ace in 2019. Abbott went on to go 8-8 last season, bringing his career mark since the Cubs drafted him in 2017 to 16-14 while posting a stellar 2.84 ERA.

What stood out last season was not the wins and losses but more so his ERA for Tennessee which was a solid 3.01. Add in 52 walks and his 166 strikeouts and Abbott became the first Cubs pitcher since 2009 to record 150 or more strikeouts in a minor league season en route to earning the teams minor league pitcher of the year honors. Set to open 2020 in AAA, Abbott would have been the most likely pitcher not named Adbert Alzolay to reach the bigs this season.

Also, 24 years of age, Miller had even better numbers than Abbott while at AA before his numbers went south upon arriving for AAA Iowa. Already on the Cubs 40-man roster heading into spring, the Cubs fourth-round pick in 2016 is looking to put himself in position to contend for a roster spot in 2021.

For his career, Miller has gone 24-25 with an ERA at 4.05. You would have never guessed that with Tennessee last season as he went 4-3 over 15 starts and led the team in ERA at 2.56 walking 18 as opposed to 80 punchouts. That performance earned him a promotion to Iowa, where things went entirely south going 3-5 with a 7.58 ERA in 11 starts. That was mostly due in part to a juiced ball, but over his final four starts, Miller started to figure things out. It would have been nice to see him put a full season of AAA ball together.

Justin Steele is a bit of a mystery for the Cubs as he would have been in the major leagues already had it not been for a series of catastrophic Injuries. Not only does he have a big-league caliber curve that is a wipeout pitch against lefties, but his heater is also big-league ready sitting in the 94-95 MPH range. Now another year removed from Tommy John, Steele is hoping to finally be healthy for a full season and show the Cubs what he can offer.

Originally drafted as a starter, the injury history of Steele has me to believe he is ticketed for the bullpen or at the very worst someone who could fill in a Mike Montgomery type of role. In 80 career games in the minors, including 75 starts, Steele has pitched to a 16-23 record, but his 3.62 ERA has the team believing his best is still to come. In 2017 and 2018, Steele was at his best, making 31 starts over those two seasons and going 8-9 with an impressive 2.73 ERA. He followed that up with 11 starts last season going 0-6 with a 5.59 ERA before another injury shut his season down. It will be interesting to see how the Cubs use him at South Bend Camp and what their plan for him going forward is.

The final pitcher on this list set to head to South Bend is that of another southpaw in 24-year-old lefty Jack Patterson. 24 is the magic number apparently as all four of these pitchers are indeed 24 years old. Outside of Brailyn Marquez and what he accomplished last season, Patterson was the breakout lefty in the Cubs system last season and has been rewarded with a solid promotion to South Bend camp. Not only did he start the season with South Bend last year, but he managed to reach AA by seasons end putting up insane numbers at all three levels.

A 32-round pick in 2018, Patterson brings a similar velocity of the likes of Jon Lester and Jose Quintana as his heater sits in the low 90’s. He offsets that heater with a nasty curveball slider combination that has proven to be nearly unhittable at times. Given that he doesn’t throw as hard as Steele, moving Patterson to the pen may be a fast track move to get him in the majors sooner rather than later. However, on the flip side, you kind of want to see what he can do as a starter long term given the numbers.

In two years in pro ball, Patterson has appeared in 35 games, making 15 starts. He has posted not only a 10-2 record but a 2.04 ERA during his time walking 42 and striking out 113. Last season is when we got to see the best of Patterson as he made nine starts and 15 relief appearances going 8-1 and pitching to a ridiculous 1.69 ERA. Add in his 32 walks and 80 strikeouts, and you can see how much he has improved his command overall also.

This is the kind of pitcher that always gets me excited as he was another late-round selection that is starting to turn heads. We will certainly be keeping an eye on these four pitchers as well as any other names surrounding the Cubs system as they look to finalize their 60-man player pool.

If we’re letting Instagram stories break the news, then it would appear Keegan Thompson is another starting pitching prospect poised to join the South Bend taxi squad.

Thompson battled injuries last year, but impressed with a 9.2 K/9 and 4.3 K/BB in the Arizona Fall League.