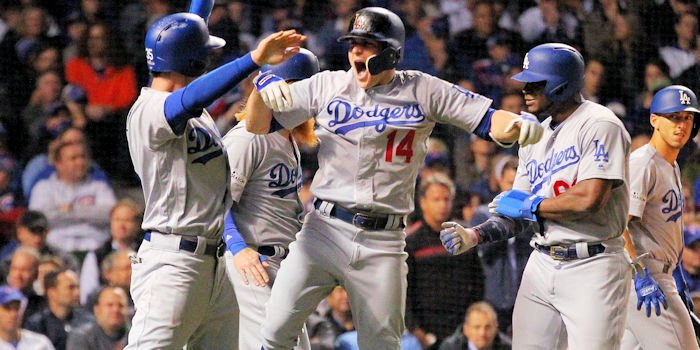 CHICAGO — After winning Game 4 of the NLCS with just five hits, the Chicago Cubs assuredly knew that they needed to come alive at the plate in Game 5, but they didn't. With just four hits in a season-ending performance, the Cubs were outmatched by a Los Angeles Dodgers team that came alive at the dish, driving in 11 runs in a blowout win that sent them to the World Series for the first time since 1988.

Lasting just two innings, Cubs starter Jose Quintana came up small in what was, without a doubt, the most important start of his young career thus far. Quintana was charged with six runs on six hits, including one of three home runs collected by Dodgers left fielder Enrique Hernandez on the night.

With his lone RBI of the series, Dodgers first baseman Cody Bellinger doubled home center fielder Chris Taylor to put the Dodgers up 1-0 in the first inning. In the second frame, Hernandez hit his first dinger on the evening, powering a shot to straightaway center. L.A. benefited in a big way via home runs in this series, hitting 10 of them.

The first pitch of @kikehndez's AB?

In the third, Cub killer Justin Turner drove in another run on a single to give the Dodgers a commanding 3-0 lead. Thereafter, Quintana was pulled, which proved to be a mistake, as reliever Hector Rondon gave up a grand slam to Hernandez, who finished with seven RBI.

Nice night for a jog around Wrigley with a couple of your friends. #ThisTeam pic.twitter.com/kk3dT401Sy

Los Angeles continued to pour it on in the fourth frame, this time off of recently-maligned Cubs pitcher John Lackey. Dodgers second baseman Logan Forsythe powered home Bellinger and right fielder Yasiel Puig on a two-run double toward the wall in left.

Kris Bryant collected just his fourth hit of the series in the bottom half of the fourth inning on a meaningless 368-foot homer to left off of Dodgers ace Clayton Kershaw, but the Cubs were already facing too lofty of a deficit. Kershaw was solid in his outing, throwing six innings of three-hit ball with five strikeouts to his name.

Following Kershaw's departure, Dodgers relievers combined to give up just one hit, epitomizing one of the major differences that contributed to the 4-1 series win for Los Angeles over Chicago. While the Dodgers' bullpen retired 51 of 58 Cub hitters in the series, the Cubs' bullpen was one of the primary detriments to Chicago.

Hernandez put a bow on the 11-1 blowout in the top of the ninth with his third bomb of the game. Smacking a two-run homer off of Mike Montgomery, Hernandez tied an MLB record by garnering seven RBI in a postseason game. Having hit zero playoff home runs prior to Thursday, Hernandez was certainly the surprise performer of the series with his epic three-homer showing, the first to ever take place at Wrigley Field in the postseason.

Losing the series 4-1, the Chicago Cubs saw their bid for a repeat come to an inglorious end. Giving up 16 hits to the Dodgers, the Cubs' pitching staff was woeful in Game 5, but the hitting was not much better. In fact, the Cubs' hitting was subpar throughout Chicago's playoff run, scoring just eight runs. To put that in perspective, Hernandez drove home only one less run in Game 5 of the NLCS than the Cubs scored in the entire postseason. So, while the Dodgers will advance to the World Series, the Cubs will look ahead to an offseason in which management will have a number of roster-related questions to answer.

When speaking on how to recover from the disheartening NLCS exit after the game, Cubs manager Joe Maddon told reporters, "Remember what it feels like, and try to prevent that next year."

Though the ending to the season certainly was not ideal for the Cubs, the fact that they advanced to their third straight NLCS, something that is very difficult to do in this day and age of professional baseball, speaks volumes on the tenacity of this team. Therefore, despite the numerous and sundry questions facing the Chicago Cubs at season's end, the odds bode well for another great showing in 2018 from the team no longer known as the Lovable Losers.

Thank you for your support throughout the season and another run to the #NLCS! pic.twitter.com/YH12TqHnSo