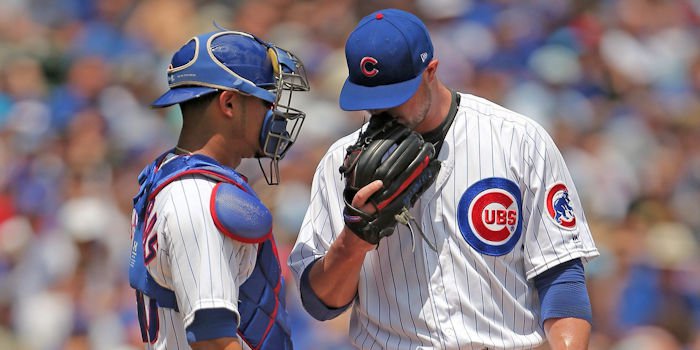 The battery of Jon Lester and Willson Contreras was back with bells on tonight.

CHICAGO — When Jon Lester pitches, the Chicago Cubs seem to hit. At least, that has been the theme of the past month, as the Cubs have scored a minimum of 10 runs in Lester's last four starts. Scoring a season-high 17 runs and collecting a whopping 16 hits and 11 walks, the Cubs laid siege to the New York Mets tonight with Lester on the mound, cruising to a 17-5 victory. With five batters accruing multiple RBI, including a six-RBI performance by center fielder Albert Almora, Jr., the Cubs pummeled the Mets' pitching staff en route to earning their second straight commanding victory over New York.

Lester pitched well on the night but was certainly aided by his teammates at the plate. Throwing six innings of six-hit ball, Lester gave up a run in each of the first two innings before settling into a groove. Taking a page out of fellow Chicago starter John Lackey's book, Lester gave up a leadoff home run to begin the game, as Mets second baseman Jose Reyes started the action off with a home run to left-center.

Fortunately for Lester, who earned the win in the contest to become 11-7, his adversary, Mets right-hander Matt Harvey, struggled from the get-go, giving up two runs in the bottom of the first. Harvey, who recently returned to the mound following a lengthy injury layoff, was pulled in the fourth inning after giving up seven hits and walking four. The ace was actually more effective with the bat, as he laid down a perfect sacrifice bunt that scored a run for the Mets in the top of the second.

Harvey was arguably pulled too soon, though, as the Cubs scored a pair of runs in the fourth after Mets reliever Hansel Robles replaced Harvey and proceeded to walk in a run and give up a two-run single in back-to-back at-bats. The two-run single, which put the Cubs up 5-2, came via Cubs catcher Willson Contreras, who returned from an injury earlier this week. Contreras had himself a game, going 2-3 with a walk and collecting three RBI.

With the exception of a run being scored by the Cubs due to an error by Mets third baseman Asdrubal Cabrera in the sixth, the innings closely following Harvey's departure were relatively quiet. But Cubs shortstop Javier Baez, who went 4-5 and scored three runs on the evening, opened the floodgates by leading off the bottom half of the seventh with his 22nd homer of the season.

A solo shot to left, the home run by Baez was reciprocated later in the inning by a three-run blast from Almora. Amassing six RBI in just two at-bats, Almora, who also came through with a three-run triple in the eighth, put the Cubs up 10-2 with his three-run blast in the seventh. The Mets were able to add three meaningless runs off of Cubs reliever Justin Grimm in the top of the eighth before the Cubs poured it on in the bottom of the eighth. Scoring seven runs on four hits, including Almora's triple, the Cubs (79-66) made the score 17-5, which served as the final tally in what turned out to be a one-sided blowout. Chicago will aim to pull off a three-game sweep of the Mets (63-82) tomorrow night.