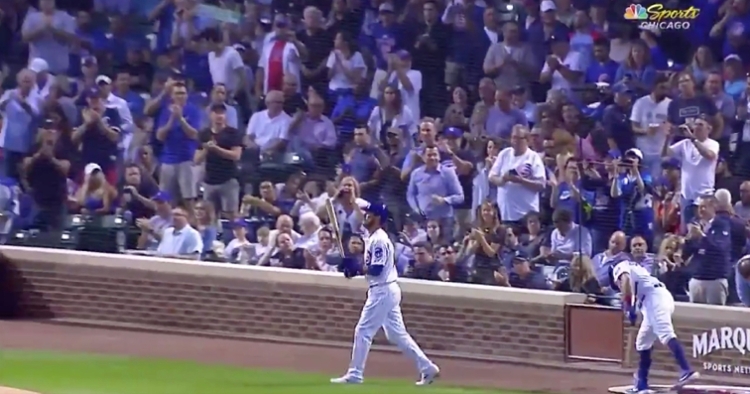 Prior to his first at-bat with the Chicago Cubs since May 6, Ben Zobrist received a standing ovation from the fans at Wrigley Field.

CHICAGO — Stepping up to the plate in a Chicago Cubs uniform for the first time since May 6, veteran Cubs utility man and fan favorite Ben Zobrist was treated to a warm welcome by his adoring supporters at Wrigley Field on Tuesday. Zobrist batted leadoff against the Seattle Mariners on the night as part of his first action with the North Siders since he stepped away from the team due to personal reasons in early May.

Zobrist was given a standing ovation by the Cubs fans in attendance when he dug in at the plate. There was no storybook ending to the at-bat, though, as Zobrist struck out swinging on a full count. Mariners ace Felix Hernandez was responsible for the strikeout. For what it is worth, the rendition of the Elton John classic "Bennie and the Jets" performed by Zobrist's wife, Julianna, served as Zobrist's walkup song.