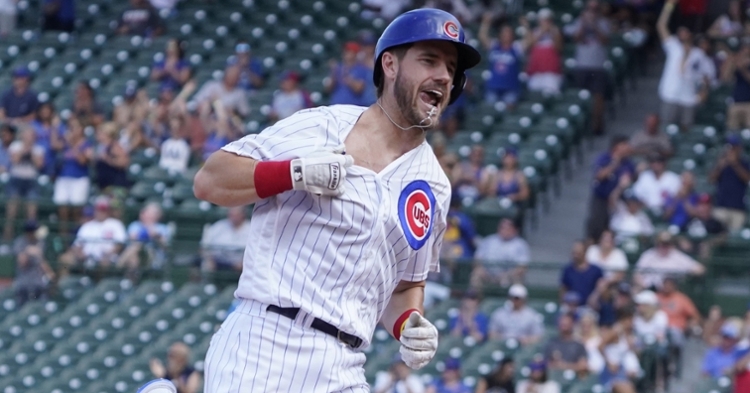 We continue to shift across the infield in our prediction series, where we reach the hot corner. Like the rest of the infield, the Cubs will have a new opening day starter as Kris Bryant is no longer with the team. Come to think of it, the entire starting infield from last season is gone, and you can't say that about another MLB franchise this season.

While the Cubs are expected to platoon a lot of their players this season, third base could be one of those positions that is a moving door as several players have an opportunity to contribute. Who those players are remain to be seen, but I think it is safe to say that you will have a minimum of three guys holding down the fort.

There were a lot of feel-good stories in the MLB last season, and Patrick Wisdom was one of them. A former top prospect in the St. Louis Cardinals organization, Wisdom was considered a minor League start as he had yet to do anything in his eight years of baseball service. Always known as a power hitter, Wisdom struggles to hit for a high average as his below-average walk rate, and insane strikeout rate effects him immensely.

Still, when he does put the bat on the ball, he usually does damage, and that was precisely the case last season. Despite hitting just .169 in the Minors and then .237 in the majors, Wisdom combined for 32 homers and led all National League rookies with 29 homers. That goes to show you the kind of power he has. Now he needs to work on consistent contact, or he will be going nowhere this season.

I expect Wisdom to get a ton of playing time this season, but look for it to be more of a platoon style. Despite the power numbers and the potential to hit many homers, you can't count on a guy who strikes out nearly 50% of the time. That is where Wisdom is, and until that comes down, he will not be an everyday guy.

That doesn't mean he won't succeed with the role he is given, and I think he will have a significant role this season. When it comes to Cubs fans, they would love to see him figure things out as he could be the power hitter they need in this lineup.

Among the many moves the Cubs made on Thursday, Jonathan Villar was the best of those moves as he was signed to a one-year 6.5 million dollar deal with a second-year option. The 31-year-old switch hitter has bounced around a lot in this league, but can play multiple positions, has a ton of speed, and can bat leadoff. All those are things the Cubs are looking for, and that is why his pickup makes a ton of sense.

Seeing Villar land in Chicago is not shocking as the Cubs were rumored to be in on him since before the lockout. Knowing that and continuing their talks again post-lockout, the sides agreed to a contract, and now Villar will be heading to Chicago. This is an excellent signing for this team.

Much like Nico Hoerner, who we talked about earlier, Villar will play, and he will play all over. That is the benefit of being versatile and being able to move around as he gives the Cubs plenty of options. A better hitter from the left side, look for a lot of his games to come against right-handed pitchers while his speed will play a factor later in games.

One of the more frustrating players on this team is David Bote. Now entering his fourth season with the MLB club, Bote has flashed the potential to be an everyday player, but has lacked the consistency warranted to be that. Looking at his minor league track record, where he was a .278 career hitter, it is hard to fathom that he is nearly .50 points lower than his minor league mark and that is a concern.

Along with an inconsistent average at the plate, Bote has had a tough time staying healthy, especially last season. You have to wonder if that started to take a toll on him and if he needed a full reset. Now healthy again, Bote is another one of those versatile players who David Ross can move around the infield in an effort to create matchups in his favor.

We mentioned it above, Bote has had a hard time staying healthy, and guess what he is hurt again. While the injury is not serious, Bote will miss some time to start spring which will effect him to begin the season. Once he is ready to go, look for him to fall in the Hoerner and Villar role of being a utility platoon player who moves across the diamond.

Although his average hasn't been great since coming to the bigs, Bote has had a knack for huge hits and often ranks near the top in hard-hit rate and RBIs. Add in his solid defense at both second base and third and he is someone you like to have on your team even if not a full-time role.