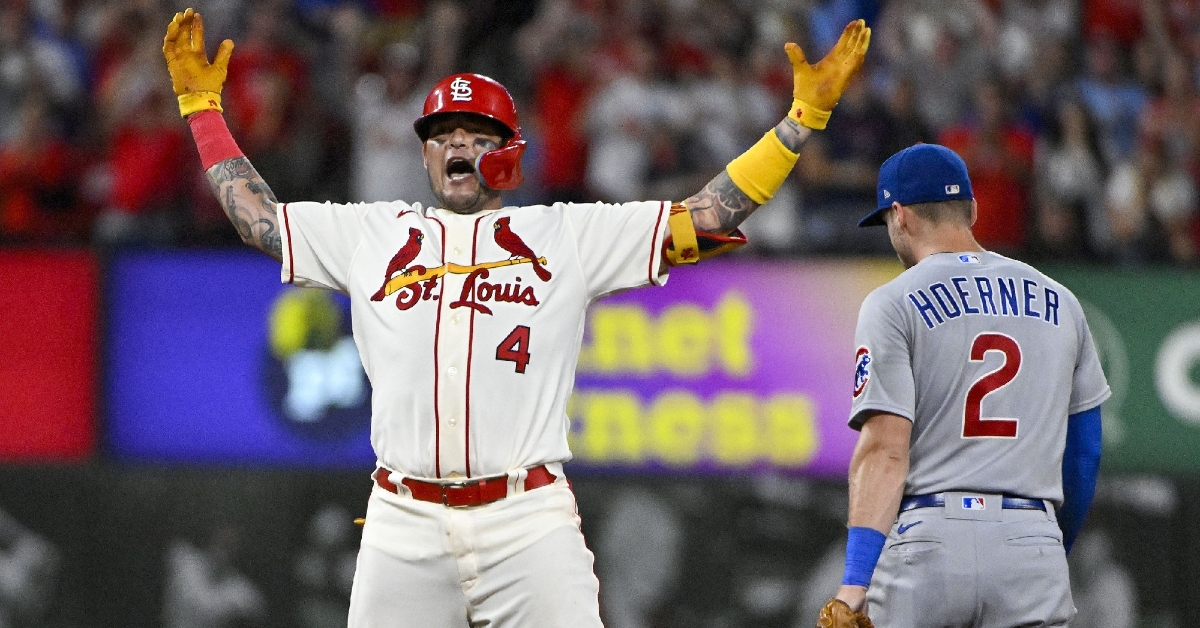 ST LOUIS - As a Chicago Cubs (56-77), who do you want to help more as a team? Do you want to try and help your hated rivals to the North, the Milwaukee Brewers, or will they help the team that everyone hates, the St. Louis Cardinals (78-55)? I know that is just a phrase, and the Cubs are not going out and trying to lose games, but right now, they are doing the Cardinals favor as St. Louis doubled up the Cubs 8-4 and guaranteed themselves a weekend series win.

If the Cubs thought facing Jordan Montgomery was hard, and credit the lefty for owning the Cubs twice in the last two weeks, but Chicago had another tough matchup on Saturday as they took on the ageless wonder Adam Wainwright who continues to pitch better the older he gets. Despite the first inning struggles that saw him fall behind big, Wainwright was able to bounce back and allowed just one more run the rest of his start to get through five innings, allowing four runs.

When you look at who was opposing him for Chicago in Drew Smyly, you had to like the Cubs chances as he has been on quite a roll lately, allowing two runs or less in seven straight starts and fewer than three runs in 10 straight. He has been a pleasant surprise this season and may have pitched himself into a contract extension next year, especially when you listen to him talk about his time in Chicago.

However, this was not one of his better starts this season as Smyly not only allowed two runs in the first inning, but couldn't make it out of the third as the Cardinals six-run third inning was the difference in the game. The first inning has been very kind to the Cubs this season, especially on this road trip.

That continued on Saturday as a trio of one-out singles from Seiya Suzuki, Ian Happ, and Franmil Reyes led to the game's first run, with Reyes picking up that RBI. With runners on second and third and two outs, the Cubs had a chance to hang a crooked number against Wainwright and did so off the Rafael Ortega single that made things 3-0 at that point.

Unlike most games where the Cubs bullpen has let the lead get away late, Smyly immediately saw the Cardinals close the gap to 3-2 as his one-out walk to Tyler O'Neill came in to score on the Paul Goldschmidt homer as the Cardinals appeared hungry for more. The more we are referring to would come in a big way in the third inning, and it came after the Cubs wasted a pair of opportunities to add on in both the second and third innings.

If you want to beat a team as skilled as the Cardinals are, you can't squander scoring chances, and by not cashing in some runs in either of those innings, you knew it was going to come back and haunt you. Judging by what happened in the third, it may not have mattered because the Cardinals offense was at a different level in that inning.

Four pitches into the third, the Cardinals had a 4-3 lead as Tommy Edman and O'Neill connected for back-to-back homers to start things off. A Goldschmidt single and walks to Nolan Arenado and Dylan Carlson had the Cardinals threatening as they loaded the bases with one out.

That forced a call to the bullpen, where Jeremiah Estrada was brought in to face the future hall of Famer Yadier Molina, who took a 1-2 pitch and ripped it for the bases-clearing RBI double to bust the game open 7-3. Molina would eventually come around to score on the Lars Nootbaar sacrifice fly as the six-run third inning for the Cardinals resulted in an 8-3 lead by the time it was over.

Take away that inning, and the Cubs pitching was very good even though Mark Leiter Jr had to work out of a jam in the fourth. The problem was the offense went quiet after the early stages of the game, and not being able to get to Wainwright early didn't help.

The Cubs continued to scratch and claw in the fifth, with Happ leading things off with a double before coming home on the Reyes single as his hot start with the Cubs continued. Yan Gomes picked up a leadoff double to begin the sixth, but he was left stranded on the bases as the Cubs inability to consistently drive guys in continues to be a painful mystery.

Outside of some command issues from Erich Uelmen and Luke Farrell across the game's final three innings, the duo kept the Cardinals off the board. However, it wouldn't be good enough as St. Louis continues to push towards the postseason with another impressive 8-4 win. Surprisingly, the Cubs did outhit the Cardinals 10-9, with five guys coming away with two hits.

Reyes, Happ, Ortega, Gomes, and Suzuki were those players, as most of them have been on a month-long hot streak. Reyes and Ortega also added all four RBIs, with both coming away with two in the loss.