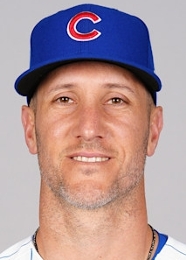 2016
Endured a tough offensive season around a two-month stint on the disabled list beginning in July but was his usual reliable presence with the pitching staff behind the plate...Despite ending the season with a .165 batting average his 32 RBI at the time of his shoulder injury ranked tied for 4th among American League catchers at the time...Overall on the year he made 64 starts at catcher (70 games) as the Indians staff recorded an ERA of 3.62 (230 ER, 572.1 IP) with Yan behind the plate and the Indians went 38-26 (.594) in his starts...Threw out 34.5% (10/29) of baserunners attempting to steal off him...Suffered separated right shoulder on July 17 in the 5th inning at Minnesota trying to avoid a tag at first base after an errant infield throw...Snapped an 0-for-27 earlier in the game and ended his July on a 2-for-37 skid...Was placed on the 15-day Disabled List the following day and was transferred to the 60-day D.L. in early September...At the time of his injury was hitting .165 (41-249) with 11 2B, 8 HR & 32 RBI in 71 games and had not been above the .200 mark since April 30...Began a rehab assignment between AA Akron and AAA Columbus on September 2 and rehabbed with the RubberDucks and Clippers thru their respective postseason's before being hit by a pitch in his final rehab game of Sept. 14 vs. Trenton in the Eastern League finals, sustaining a broken right wrist after being hit by 3-2 fastball in his third plate appearance of the night, virtually ending his season...Hit a combined .333 (9-27) w/3 2B, HR, 5 RBI in 9 rehab games...Resumed throwing during last ten days of the season and felt good enough to be activated for the final weekend at Kansas City, appearing in 3 games at catcher in the late innings and making a start at Kansas City on the season's final day of Oct. 2 (homered off Ian Kennedy in the 3rd inning; his first since June 25 at Detroit)...The 2014 A.L. Silver Slugger tied his single-game career-high with 5 RBI (2nd time) on April 23 at Detroit, going 3-for-5 with 3 R, a 2B and a home run...Hit .188 (19-101) with runners on base for the season...Homered in 3 straight games, May 13-16, for the first time in his career...His .127 (23-181) average vs. RHP was the lowest in the A.L. among players with at least 175 plate appearances vs. righties...Was on all three Postseason rosters and appeared in four games in the World Series as a pinch-hitter or defensive replacement in the middle innings.

2015
Spent season between Texas and Atlanta...Was on the 15-day DL in Texas from May 15-June 3 with left shoulder inflammation and was later designated for assignment on July 11 and later released...Signed with the Braves and spent the remainder of the season in the Braves bullpen...Left Sept. 10 game vs. NY Mets with a left hamstring strain and did not pitch the remainder of the season...For the year limited left-handed batters to a .234 (18-77) average against...In his career, the Wentzville, MO native has limited left-handed batters to a .233 (123-528, .615 OPS) average against while posting a career relief ERA of 3.98 (53ER/120.0IP).