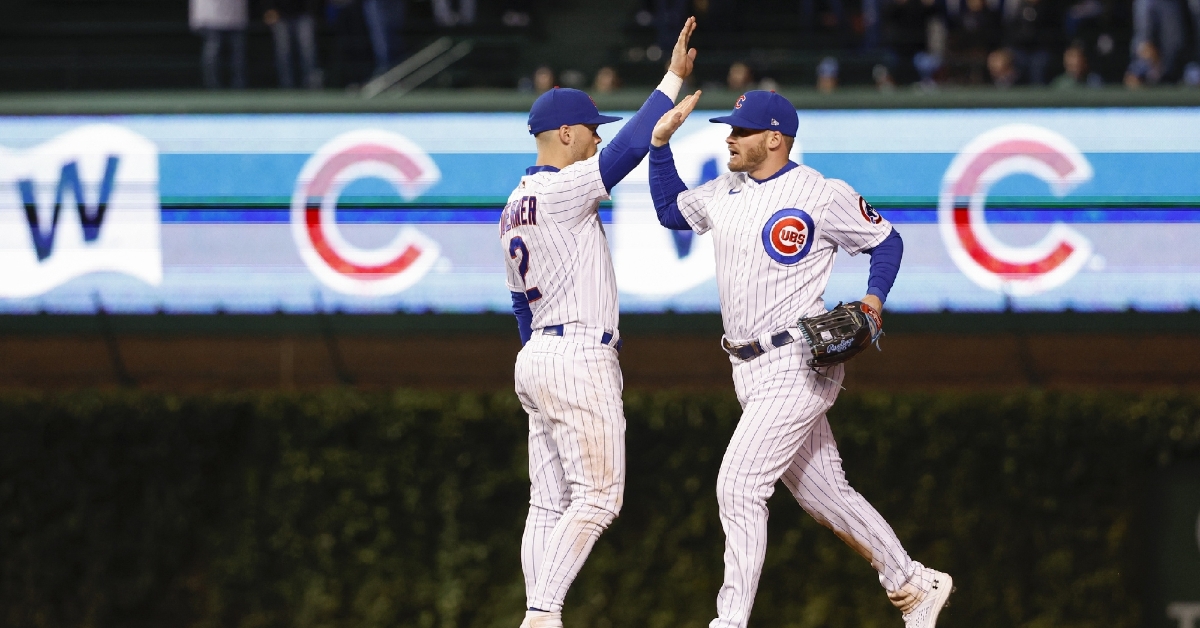 We’re to that point in an offseason with not many hitters left on the open market, and it appears the Cubs have their group of players ready to move into next season.

After finishing the second half of last season strong, the Cubs added a strong amount of hitters to their roster, including Dansby Swanson, Cody Bellinger, Tucker Barnhart, Eric Hosmer, and Trey Mancini. The Cubs have also made a few moves on the pitching side of things that flew under the radar.

With a 26-man roster, the Cubs will likely carry 13 hitters — so let's break down the pool of players, who we think will start where, and the depth that the Cubs may have near the top of Triple-A.

First Base: It appears likely that Eric Hosmer will begin as the starter at first base, with Trey Mancini, Cody Bellinger, Patrick Wisdom and even Ian Happ available to take reps at first base if needed. Matt Mervis was slotted to be in this picture due to his monster numbers last season in the minors, but with three major league reliable first basemen who can also DH, Mervis may begin the season in Triple A Iowa.

Second Base: After the signing of Dansby Swanson, second base is Nico Hoerner’s spot. The Cubs have talked a lot about leaving Nico in a place he can succeed and not move him around, which would now be second base, where he has displayed gold glove-level defense before. That would leave Nick Madrigal, Christopher Morel, and Zach McKinstry to back him up. If they get very desperate, David Bote, Sergio Alcantara, and Miles Mastrobuoni could play the position.

Shortstop: This is Dansby Swanson’s spot, and Nico Hoerner will start there if he needs rest. Should the Cubs need more depth for a shortstop, look for Morel or McKinstry to pick up a spot start.

Third Base: This is probably the biggest question mark the Cubs have left; who will get reps at third base? The Cubs have Patrick Wisdom, Christopher Morel, Nick Madrigal, and Zach McKinstry, who could play third — and if they get very desperate, David Bote, Sergio Alcantara, and Miles Mastrobuoni could play the position.

Left Field: This will be Ian Happ’s position, fresh off his first career All-Star Game and Gold Glove. Trey Mancini, Nelson Velásquez, Christopher Morel, and Patrick Wisdom all have some corner outfield experience as well.

Center Field: Cody Bellinger has spent the majority of his career in the outfield, with some action at first base as well. With first base jammed up, we expect to see Bellinger in a center field almost every day on his prove-it deal. Christopher Morel seems like the most likely back up, and at the very least, will start during games against very tough lefties.

Right Field: Seiya Suzuki will be the everyday right fielder, but like left field — Trey Mancini, Nelson Velásquez, Christopher Morel, and Patrick Wisdom all have some corner outfield experience as well.

Catcher: It will likely depend on the pitcher, but the Cubs have two reliable defensive catchers in, Yan Gomes and Tucker Barnhart.

Designated Hitter: Due to the discombobulation all over the corners, I would imagine whoever does not start there would be DH on any given day. My best guess is Trey Mancini is DH mostly, with spot starts from Wisdom, Morel, Hosmer, and Madrigal — Mervis is also in this picture if he does make the team.