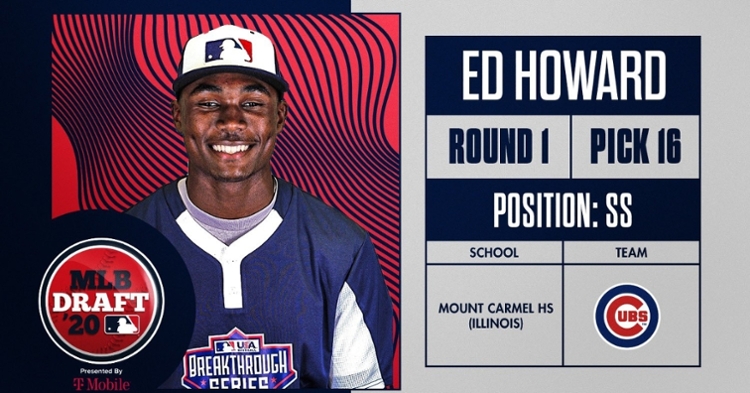 For the first time in as long as I can remember, and maybe ever, we were without a minor league baseball season in 2020. That meant that so many highly touted prospects could not showcase their stuff in front of fans and impress coaches. This list happened to be this season's 2020 draft picks, who will be a step behind when 2021 begins.

With the draft cut down to five rounds this season, teams scrambled to make the most of those picks, knowing these players won't have competitive action. Fortunately, there is a fall instructional league going on, so at least the players will get some work in this season.

2020 saw the Cubs strike gold with first-round pick Ed Howard and second-rounder Burl Carraway. While Howard may have the highest upside, Carraway may be the most big-league ready talent at this point hence why he was stashed in South Bend in August.

With a fall instructional league kicking off in Mesa, those two have joined prospects, Brailyn Marquez, Brennan Davis, Miguel Amaya, and others as Cubs director of player development Matt Dorey leads the Instructional league. With no minor league season and Marquez only getting a small taste in the bigs this year, hype regarding these talents has been well reserved and good reason as they have not played in a long time.

This instructional league hopes to give these players some competitive games that will hopefully help them next year. Across the past year, except for Marquez, Outfielder Davis may be the Cubs most crucial piece. He continues to impress both offensive and defensively despite being limited to just 32 games in his first pro season. His bat speed is off the charts, and the more he fills out his body, the more power.

Miguel Amaya is another essential piece for the Cubs as he is the answer behind Willson Contreras. With both Contreras and Victor Caratini on the roster, it is only a matter of time until one of them is gone paving the way for Amaya.

Had there been some minor league season, Carraway may have been in the Cubs plans come September. Now fans will have to wait and see how this offseason goes and where he ends up in 2021.

Other prospects stationed in South Bend last season looking to breakout are Cubs Minor League pitcher of the year in 2019 Cory Abbott, 2020 first-round pick Howard and third baseman Christopher Morel. Abbott and Morel were both in South Bend last season, but Abbott was the one who saw the most time. All three of them got significant work in, but with no scout or video, what that work is will never be known.

Going back to Carraway, who I was pulling for to get a shot this season. I understand why the Cubs held him back, and that was because there was no minor league season. Had there been, Carraway would likely have been in Chicago. Dorey had a lot to say about Carraway all season, and they didn't do much work with him as he felt his stuff had the opportunity to play at the bigs this season. The Cubs wanted to see some competitive innings out of him and didn't feel it would be wise for that to be at the major league level right away.

On the other hand, Howard is a different story as the Cubs took him directly out of high school. Late to the party, Howard eventually made his way to South Bend, where his defensive ability continues to be on the forefront. Howard also worked out with the Cubs director of hitting this summer, and the results have been positive.

A solid contact and line-drive hitter, Howard can turn into a 20-homer player. When you see the amount of muscle Howard has put on, that shouldn't surprise you at all. The more size he puts on now, the better, and his elite bat speed hasn't changed. Check out his RBI Double during an instructional game, and you will see what I mean.

Ideally, when you draft a high school shortstop in the first round, you hope they can turn into a power hitter. However, if by chance, Howard is not

that hitter, you want his bat speed to stick so he can be a gap to gap line-drive hitter and hit for average. The Cubs will not abandon their power first attack, but they need some more contact-oriented hitters, and guys like Howard, Davis, and Morel appear to be those types of guys.

I was hoping to hear more from the one prospect of this year's fourth-rounder Luke Little. Now, there wasn't much to go off regarding Little outside his 100+ mph heater from the left side. Standing at 6-8, he is as close to Randy Johnson as you can get, but with a lack of command, that high velocity will only take you so far. I am curious to see what the Cubs plans are with him.

You can't teach velocity, but you can teach control. Fans will gladly take five mph off that fastball if the command improves. Could you imagine the Cubs pen's future back end if Carraway, Wick, Little, and others emerge? That would suddenly become a strength and would look like the past's dominating pens (Royals in 2015 and Dodgers in 2017). It's disappointing that we couldn't see these players in action this season, but there is light at the end of the tunnel.