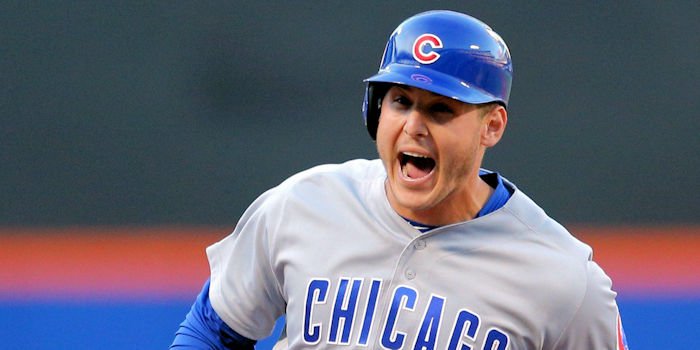 The Cubs were unable to capitalize on Anthony Rizzo's home run to start the game. Credit: Brad Penner-USA TODAY Sports

NEW YORK – After hitting five home runs yesterday, the Chicago Cubs picked up right where they left off against the New York Mets tonight, hitting two long balls in the first two at-bats of the game. However, with two critical home runs of their own, the Mets, who were without three starters due to injury, came from behind to defeat the Cubs 9-4 in the rubber match of the three-game series at Citi Field, using a five-run eighth inning to break the Cubs' hearts.

Batting leadoff for the second night in a row (and for the second time in his career) Cubs first baseman Anthony Rizzo, hit a leadoff home run for the second straight game. Booming a shot to center, Rizzo put the Cubs on top 1-0 and became the first Cub to hit leadoff homers in his first two leadoff stints since 1920. The round-tripper, Rizzo's 15th of the year, marked the slugger's only hit of the night.

Rizzo was not the only Cub to go deep in the opening frame, though, as second baseman Ian Happ, who hit a grand slam last night, cranked a solo shot to right in the second at-bat of the game. Happ has collected seven homers and 15 RBI since being called up to the majors last month.

After getting off to an atrocious start, Mets starting pitcher Matt Harvey never gained his composure, lasting only four innings on the mound. Harvey has struggled with giving up homers all season long, and tonight epitomized as much. With a man on first in the top of the fourth, Cubs left fielder Kyle Schwarber victimized Harvey by smacking a sky ball over the Shea Bridge fixture in the right-field bleachers of Citi Field. With an exit velocity of 114 miles per hour and a distance of 467 feet, the long ball put the Cubs on top 4-1, a lead that would gradually dissipate.

Not sure what this baseball ever did to @kschwarb12 … #Crushed pic.twitter.com/3EQRJVCwrT

With Mike Montgomery on the mound, the starting pitcher who was converted to a relief pitcher and is now back to serving as a starting pitcher performed fairly well early on. The Mets tacked on a run in the second inning thanks to a costly two-out fielding error by third baseman Kris Bryant that enabled Mets right fielder Jay Bruce to score, but that was Montgomery's only blemish in the early goings.

All in all, Montgomery's start on Wednesday can be summed up as fairly frustrating, with several infield and bloop singles, plus the aforementioned error, ultimately resorting in Montgomery allowing three runs to score in six innings pitched. After two singles and a walk loaded the bases with one out in the fourth, Montgomery proceeded to give up an RBI single to pinch-hitting pitcher Steven Matz that was followed by a sacrifice fly off the bat of center fielder Juan Lagares.

Trailing 4-3 at that point, the Mets settled into a groove while the Cubs fell out of one, with Chicago coming up relatively empty at the plate for the second half of the contest. Finishing with nine hits, three of which were home runs, the Cubs were outmatched by the small ball put on display by the Mets. Collecting 13 hits, the Mets were effective from top to bottom of the batting order en route to earning the victory.

Perhaps no hit was more important, however, than a sixth-inning triple by Lagares. Cubs reliever Pedro Strop started the inning by walking a batter but struck out the next two. Lagares then came through in the clutch, crushing a triple to deep center that scored the Mets' Curtis Granderson with ease to tie the game up at four.

Granderson would cross the plate yet again two innings later to put the Mets on top for the first time all night, with the veteran outfielder slugging a solo homer to right off of the Cubs' Carl Edwards, who earned the loss on the evening to drop to 2-1. Giving the Cubs a taste of their own medicine, the Mets laid waste to the Cubs' hopes in the eighth by way of the home run ball.

After Edwards struggled in the additional at-bats that followed the Granderson homer, he was pulled in favor of Hector Rondon, who proceeded to give up a three-run home run to Mets first baseman Lucas Duda that essentially sealed the win for New York. Mets second baseman T.J. Rivera added an RBI single for good measure later in the inning, and the Mets (30-34) went on to win 9-4, securing the series win as a result.

Despite a solid 3-4 showing by right fielder Jon Jay and an excellent 2-4, two-RBI performance from Schwarber, the Cubs (32-33) were, for the most part, fairly inept at the dish on Wednesday. This series, which saw the Cubs drop two of three, embodied one of the main issues plaguing the Cubs this season: living and dying by home runs.

Despite hitting nine home runs in three game, the Cubs lost two of their matchups with the Mets by 10 combined runs. Set to take on the divisional foe Pittsburgh Pirates in the coming days, the Cubs will need to begin putting forth a more balanced offensive attack if they are to experience sustained winning and avoid missing out on the postseason.