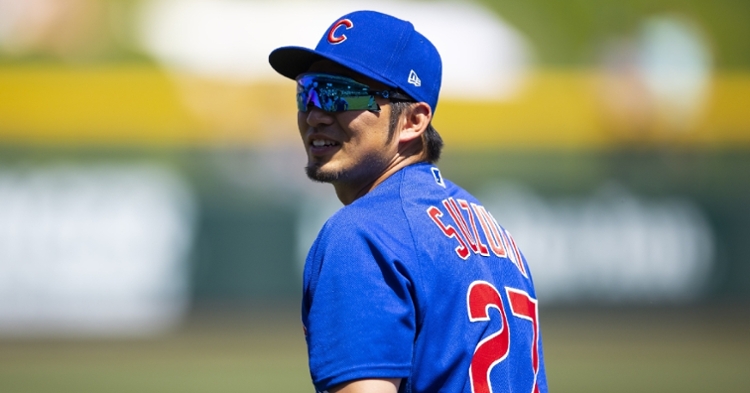 As David Ross continues to widdle down his roster, the current roster stands at 31. With just three days until opening day, Ross needs to get things down to 28 before the regular season starts.

One of the bigger surprises was finding out that minor leaguer Ethan Roberts will make the big league club after putting together a great spring.

This is the moment Ethan Roberts found out he made the opening day roster. @EthanXXVI @WatchMarquee @Cubs pic.twitter.com/78fGenu9ZD

With Drew Smyly getting the ball one final time against Vince Velasquez, Smyly was looking to finish the spring on a high note after delivering in his first two outings. Unlike his first few outings, Smyly was hit hard, allowing four runs in just 2 2/3 innings. Fortunately for him, the Cubs offense came to play as they pounded out 18 hits to pull out a 15-9 win.

The White Sox wasted no time getting the offense going as Tim Anderson led things off with a double before advancing to third on the Luis Robert single. One batter later, Jose Abreu came through as his RBI single gave the Sox a 1-0 lead. Things only got worse for Smyly as he allowed three more runs in the second to leave, trailing 4-0. Anderson picked up an RBI single before Robert added a two-run double to make things 4-0.

Although things didn't get off to a great start, that didn't stop the offense from coming to life in the third inning as they pushed across six runs to take the lead. Nico Hoerner led the inning off with a triple before racing home on a Rafael Ortega single. Willson Contreras added a homer later in the inning to pull the Cubs within 4-3 before singles from Seiya Suzuki and Jason Heyward gave the Cubs a 5-4 lead.

Jonathan Villar capped off the exciting inning with an RBI groundout as the Cubs took the 6-4 lead.

Speaking of Roberts, the newest Cub was called upon to relieve Smyly and did what he needed to do to keep the Cubs in front. David Robertson replaced him in the fifth as he managed to strike out the side. As good as Robertson was, he did allow a solo shot to Eloy Jimenez as the White Sox pulled within 6-5.

Moving to the bottom of the fifth, the Cubs offense was busting out in a big way yet again, with Ian Happ getting that run right back with a solo shot of his own.

Following a Suzuki single and a pair of walks, the Cubs had the bases loaded with two down.

Not only did a wild pitch give the Cubs another run, but a missed strike three pitch not only allowed Alfonso Rivas to reach first, but pushed across another run to make things 9-5. That was when Nick (Nicky Two Strikes) came through with his best swing of the spring, cranking a three-run shot against his former team to make things 12-5.

The Cubs were not quite done in that frame, with Contreras adding a single in front of the Happ double with Contreras coming home to score on the Frank Schwindel single and extending the lead to 13-5. Following a scoreless sixth from Chris Martin, Rowan Wick was called on to pitch the seventh as he looks to get into a groove before the season.

Wick retired the first two hitters he faced before allowing a walk to Craig Dedelow to keep the inning alive. That walk was followed by singles from Yolbert Sanchez and Andrew Vaughn as Vaughn made things 13-6. Things only got worse for Wick from there as he allowed consecutive homers to Xavier Fernandez and Danny Mendick to start the eighth as the Sox were within 13-8.

Ben Holmes was called on to finish that inning and ran into some trouble of his own as he allowed a one-out Gavin Sheets double, followed by the Alex Destino single to make things 13-9. Sensing they needed more offense, Sunday's hero Grayson Byrd led the Cubs half of the eighth inning off with a single before racing home on the Miguel Pabon double.

Kevin Alcantara followed that hit with a single to put runners on the corners before Jake Slaughter cashed in with a single of his own to extend the lead to 15-9. The next hitter was Carlos Sepulveda, who was hit by a pitch to load the bases as the Cubs still had no outs. Unfortunately, the Cubs could not do more damage as a pop-out and double-play ended the threat with the score still sitting at 15-9.

Holmes remained in the game to pitch the ninth, allowing Vaughn's leadoff single, but taking care of the rest. With the win, the Cubs are back on a three-game winning streak as they continue to play exceptionally well this spring. The Cubs will conclude their spring slate by taking on the Texas Rangers on Tuesday.