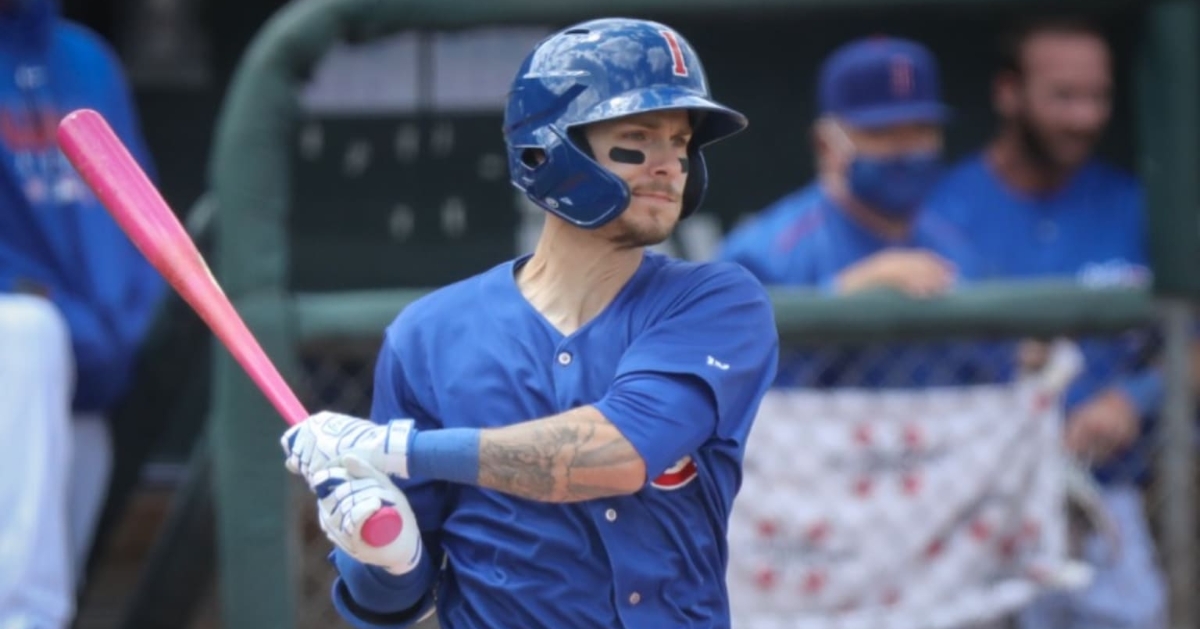 For the first time in the 2021 Minor League season, the Cubs system had a clean sweep on the diamond, going a perfect 4-0 on the night. Many key factors contributed to the success, but it all started with the pitching, where three of the four teams allowed four runs or less, and when that happens, you tend to win games.

Offensively, we are starting to see all four levels hit more consistently, as that was the biggest issue in the early part of the season. While South Bend and Tennessee are still under .500, they are trending in the right direction as all four teams within the Cubs system are feeling reeling good about their seasons so far.

After a Tuesday postponement due to inclement weather, the Cubs kicked off their home series with Omaha treating fans to matinée game. Making his third start of the season was Cory Abbott, who was knocked around quite a bit. His 4 1/3 innings of work were not only his shortest start of the season, but he also allowed a season-high four runs on eight hits as his ERA rose to 5.28 on the season. The 2019 Organizational pitcher of the year has not gotten off to a good start, and he needs to change that.

Thankfully, Abbott avoided the loss as the Cubs offense provided him with just enough support while the bullpen trio of Brad Wieck, Adam Morgan, and Jason Adam allowed just two hits in 4 2/3 innings of work to seal the 5-4 win. Both teams exchanged runs in the first inning, with Kyle Isabel picking up an RBI groundout in the top of the first before Patrick Wisdom answered with a sacrifice fly in the bottom.

It was then all Omaha for the time being. Edward Olivares put the Storm Chasers on top 2-1 with a homer in the third before a fifth-inning Lucius Fox double, and Emmanuel Rivera added some insurance to give Omaha a 4-1 lead. This was the turning point in the game as the Cubs bullpen entered with a three-run deficit and made sure they wouldn't go down further.

Their performance gave the Cubs offense a chance where Sergio Alcantara ripped his first homer of the season to make things 4-3 after five.

One inning later, it was time for Rafael Ortega to tie things up with a single as he could hear his name called up depending on Jason Heyward and his hamstring status. Taylor Gushue would add a game-winning sacrifice fly later in the sixth as the Cubs improve to a farm system best 7-5 with the win.

Alcantara had a great day at the plate, going 1-1 with two RBI's and three runs scored as he worked three walks to reach base four times. He was joined by Ian Miller, who, if I am Iowa, I am not moving him from the bottom of the lineup as he went 3-3 again and is 6-6 in his last two games out of the nine-hole. Gushue, Ortega, and Abiatal Avelino rounded out the hits for Iowa. Nick Martini was 0-3 with one walk.

We take game one against Omaha! Game two tomorrow at 12:08. pic.twitter.com/QzeLfnoo96

Extra innings are becoming a common theme for the Cubs system, especially for the Smokies who were involved in extras last night. Thankfully, they were on the winning side, this time taking down Biloxi to improve to 6-7. Erich Uelmen got the start and gutted out five innings in which he allowed three earned runs to go with five strikeouts.

After Bailey Clarke got touched up for two runs in two innings of work, Dakota Mekkes made his first appearance since being sent down, tossing 1 1/3 innings of scoreless relief. He then turned things over to Manuel Rodriguez, who finished out the final 1 2/3 to claim the win. Jamie Westbrook got the scoring started with a first-inning home run only to have Nelson Maldonado pick up an RBI single in his first at-bat of the season to make things 1-1 in the second.

Fast forward to the fourth inning, and it was Alexander Palma picking up an RBI double to give the Shuckers a 2-1 lead before Uelmen uncorked a wild pitch to make things 3-1. Then, with one swing in the bottom of the fourth, Christopher Morel gave the Smokies the lead as his three-run shot was his second homer of the season, putting them up 4-3.

Another sixth-inning wild pitch, this time from Clarke, allowed Biloxi to tie things up once again before a Cam Devanney sacrifice fly had the Smokies trailing 5-4 in the seventh. Miguel Amaya continued to come up clutch, answering with a sacrifice fly of his own in the bottom of the seventh, helping to bring things back to even 5-5 before fans saw the game head to extras. It was in the bottom of the 10th when Darius Hill sent fans home happy as his single up the middle capped off the walk-off 6-5 win.

Morel, Andy Weber, and Hill all collected a pair of hits in the game, with Morel and Hill combining for four RBI's. Maldonado joined Levi Jordan and Vance Vizcaino in the hit category, with Connor Myers also picking up a pair. Although Amaya was one of just two players not to collect a hit, his sacrifice fly did tie things up, helping to set the stage in extras.

The defending Midwest League Champions have gotten off to a slow 5-8 start but started to look like themselves last night. With Max Bain setting the tone in his five-inning, four-hit start, it paved the way for the Cubs bullpen to answer the bell with Brendon Hughes, Burl Carraway, and Eury Ramos finishing what he started. Their performance on the mound coupled with the Cubs two-run first would be all the offense needed in the South Bend 3-0 win.

Going right to the first inning where South Bend had a base runner in D.J. Artis. In danger of not scoring after leading things off with a hit by pitch, Chase Strumpf came through with a two-out single to right, putting the Cubs in front 1-0, and they never looked back. After a Yonathan Perlaza walk kept the inning going, Nelson Velazquez made it five hits in five at-bats as his single gave South Bend a 2-0 lead.

At the time, no one expected that lead to hold up, especially when you look at the traffic Dayton had on the bases early. Traffic or not, the Cubs pitching was more than up for the challenge as they didn't allow Dayton to break them. Still holding on to the 2-0 lead, Velazquez delivered his second RBI of the night with a double in the eighth to cap off the 3-0 shutout win.

Shutout victory tonight for the #SBCubs!@mbain_38 picks up his first professional baseball win with 5 scoreless innings to start the game.#FlyTheW #CubTogether pic.twitter.com/sfbOXkkkaP

South Bend only collected five hits in the game, Strumpf, and Velazquez each responsible for two apiece. Jake Slaughter added the fifth and final hit as he slowly starts to heat up with Perlaza, Delvin Zinn, and Artis all going hitless. Carraway continues to battle through some command issues despite throwing a scoreless inning of relief, while Ramos not only recorded the save but dropped his ERA to 1.29 this season.

Better late than never, right? That is precisely what happened to the Pelicans on Tuesday as they pushed across four ninth-inning runs to break a 1-1 tie and move to 7-7 on the season with a 5-2 win. Signed as an international free agent in 2018, 19-year-old Richard Gallardo is slowly starting to make a name for himself and could be a top 20 prospect in no time.

Although he only lasted four innings, it was four impressive innings as he didn't allow a hit to go with no walks and four strikeouts. Add in 1 2/3 of scoreless innings from Eduarniel Nunez, and 1 1/3 four-strikeout innings from Bailey Reid and Lynchburg was held scoreless through seven innings of action with just a passed ball providing the games only run in the Pelicans 1-0 lead.

The Hillcats finally got on the board in the eighth as they began to rally. With the bases loaded, Yainer Diaz got revenge on his earlier passed ball as his walk tied things up 1-1 with a chance for more. Fortunately, the Pelicans got out of that jam without further damage as they came to bat in the ninth. Looking to return the favor, the Pelicans did not only that but so much more as their offense was ready to go.

With two down in the inning, Jonathan Sierra kept things alive as his single gave Myrtle Beach the go-ahead baserunner. After walks to both Jacob Wetzel and Pablo Aliendo, the Pelicans had bases loaded before another walk to Reivaj Garcia gave them a 2-1 lead. Unfortunately, things went from bad to worse for Lynchburg as a wild pitch pushed across the winning run ahead of the two-run Edmond Americaan single, putting the Pelicans up 5-1. The Hillcats were able to get one of those runs back on a wild pitch, but it wasn't enough to top the Pelicans in the end.

Myrtle Beach was held to just six hits, with Sierra responsible for two of those hits. Americaan, Yeison Santana, Matt Mervis, and Yohendrick Pinango were accountable for the final four hits in what was otherwise a quiet day. Ed Howard struggled a bit at the plate, going 0-5 with two punchouts while Jordan Nwogu continues to be out of the lineup.

Pelicans move to 7-7 on the season and will be back in action against Lynchburg again tomorrow. #MBPelicans pic.twitter.com/K4L8U13YN9