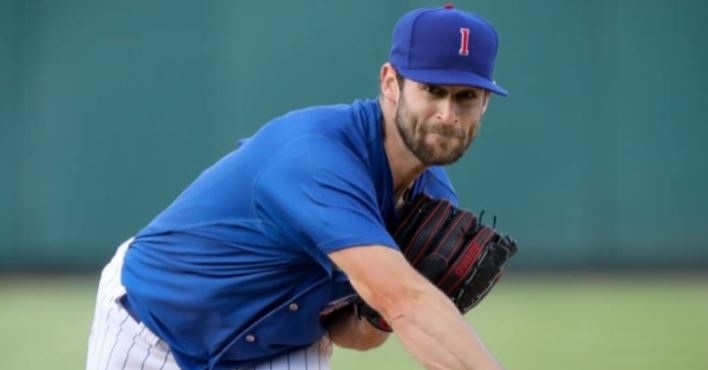 Wednesday was a much quieter night on the diamond as it was the typical off day for the Rookie League teams. Throw in another rainout for AA Tennessee, and only three of the seven teams were in action on Wednesday.

While wins were hard to come by with the organization posting a 1-2 record on the evening, it continues to be exciting for fans as they are witnessing the growth of plenty of prospects. Most of these prospects found themselves on the Cubs' top 30 list at some point this season, but several others were acquired via trade or just improved as the season went on. That leads me to believe this farm system will be a top 10 system in 2022.

There hasn't been a lot that has gone right for Iowa, but so far this week, things are trending in the right direction. Not only did top prospect Brennen Davis leave his mark in his AAA debut on Tuesday, but the Cubs have now won two straight against the High-Powered Omaha offense.

For the second time in as many outings, Cory Abbott looked like the 2019 Organizational pitcher of the season after enduring a horrible 2021 campaign. The righty was locked in all night, giving the Cubs six innings on the bump allowing just two runs on two hits to go with four strikeouts. What stood out even more was his zero walks, as that has been an issue for Abbott all season.

As expected, the home run ball was a big part of Omaha's game in the early stages. That immediately took center stage in the first inning when Emmanuel Rivera connected for his 16th homer of the season, giving Omaha a 2-0 lead. Not only were those the only runs Abbott allowed, but he was locked in over the final five innings silencing the Storm Chaser bats.

Still trailing by two in the fifth, the Cubs offense finally got things going using a massive inning to take the lead. Johneshwy Fargas gave the Cubs the lead for good with one swing of the bat as his three-run shot had Iowa in front 3-2.

With this go-ahead three-run shot, Johneshwy Fargas is your @EMCInsurance Player of the Game. pic.twitter.com/Th9UyN4USQ

Levi Jordan added a solo homer of his own later in the fifth to extend the lead to 4-2 before adding an RBI groundout in the seventh to stretch the lead to 5-2.

Trailing, but confident they could come back, Omaha used solo homers from Rivera and Brian McBroom in the seventh to pull within 5-4 as the long ball continued to be their calling. It was his 30th bomb of the season for McBroom as he ranks among the leaders in all minor league baseball. Speaking of homers, the Cubs had another homer up their sleeve as Tyler Ladendorf delivered a game-winning solo shot in the ninth to put the Cubs up 6-4. Omaha pulled within 6-5 off the Angelo Castellanos single, but couldn't get any closer with Brendan Little securing the save.

Fargas had one of his best days at the plate for Iowa, leading the way with three hits to go with his three RBIs. Jordan, Ladendorf, and Davis added two-hit games, with Davis hitting a .444 in just two AAA games. Nico Hoerner collected the final hit as he continues to rehab his oblique injury.

TENNESSEE SMOKIES vs. BILOXI SHUCKERS (Canceled because of rain)

Things have gone south for Tennessee over the last few weeks as they had another game canceled due to rain. This comes just weeks after a COVID outbreak dismissed six other contests as the 2021 season has gone south for them in a hurry.

Playing the River Bandits has been a tall task for South Bend this season, especially on the road, where they have now dropped six straight contests. For once, it wasn't in walk-off fashion as Quad Cities jumped on Cubs pitching early and often to cruise for an easy win.

Looking to get back into a winning groove was starter Max Bain, who didn't have the outing he hoped for. In just 2 2/3 innings, Bain was tagged for seven runs (five earned) as the Cubs dug themselves a big hole they couldn't get out of. The only promising outing on the mound came from this year's 16th round pick Zachary Leigh as he a scoreless inning of work, lowering his ERA to 3.00.

Bain may have had a rough go of things, but the defense did him no favors as a throwing error in the first led to two runs, with Quad Cities taking a 2-0 lead. Not only did they never look back, but they began to add on to that lead in the second with Nick Loftin connecting for an RBI double and doubling the lead 4-0.

One inning later saw Tyler Tolbert crush his first homer of the season as the Cubs were down 7-0 before realizing what hit them. Speaking of errors, the Cubs were finally able to get on the board in the fourth as the Alexander Canario fielder's choice brought home their first run, before an error on the play pushed a second run across to pull within 7-2.

That was as close as they would get with John Rave going deep for his 14th shot in the bottom of the fourth, pushing the lead back out to 8-2. After not homering for months, Jake Slaughter has suddenly found his power stroke connecting for his second homer in four days and third of the season to pull the Cubs back within five at 8-3.

Again, the River Bandits had answers, with Tolbert picking up an RBI double in the bottom of the fifth before the Loftin home in the sixth pushed the lead to 11-3. The Cubs picked up a late sacrifice fly from Miguel Pabon, making things 11-4, but the Eric Cole homer capped off the scoring in the 12-4 defeat. Slaughter has slowly increased his average in recent weeks, picking up two more hits in this one. Edmond Americaan, Yohendrick Pinango, Bryce Ball, and Pablo Aliendo all had hits in the loss.

After looking like a playoff team two weeks ago, those dreams are quickly slipping away as the Pelicans fell again 4-0 on Wednesday. Despite another excellent performance from starter Tyler Schlaffer who gave Myrtle Beach five innings of one-run ball, the offense was nowhere to be found.

Schlaffer has started to figure things out his last few outings after going through a rough month. His lone run allowed came in the third inning when Cal Conley picked up the go-ahead RBI with a groundout.

Little did anyone know that run would be the difference as the Pelicans couldn't get anything going off Andrew Hoffman, who allowed just three hits in seven innings with eight punchouts.

Making his Low-A debut in the sixth was Luis Devers after putting together good numbers for the ACL Cubs. After posting a 5-10 record with a 2.63 ERA across two seasons in the DSL, Devers moved up to Arizona this year, where he went 2-4 with a 3.33 ERA. The win-loss record isn't great, but his ERA has been solid from day one, as has his command, where Devers has walked 49 hitters compared to 164 punchouts.

Devers first outing with Myrtle Beach certainly didn't go as planned, as he allowed three runs in one inning of work, with two being earned. Those runs came on RBI singles from Bryson Horne and Christian Robinson, although an error on the Robinson single led to an additional run in the 4-0 loss.