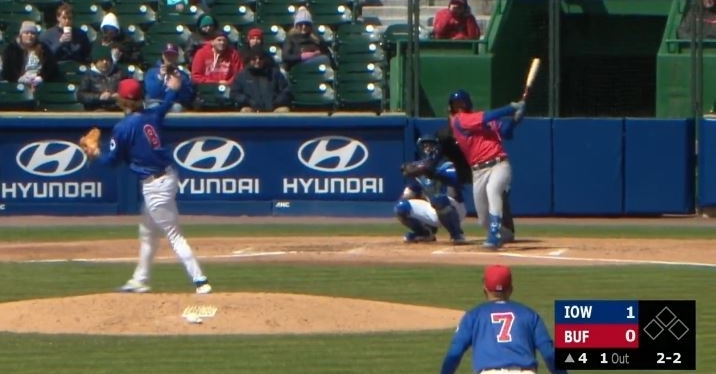 Davis smacked his first homer of 2022

Saturday was a very good day on the farm for the Cubs as they managed to go 3-1 on the day. Ironically, Myrtle Beach was the lone team that didn't come away with a victory as they have gotten off to a rough start, while the rest of the teams are starting to show promise.

It took a little bit of late-game offense and two runs in the ninth, but the Cubs managed to top the Bisons on Saturday. It was a very important day as top pitching prospect Caleb Killian made his AAA debut, giving the Cubs 2 2/3 innings of two-hit ball and striking out six in the process.

He set the tone for the evening, which saw plenty of good pitching performances, including Erich Uelmen striking out six in two innings of relief and Cayne Ueckert making his season debut. Offensively speaking, it was all about the long ball early on, with Jared Young picking up his first homer of the season in the second and Brennen Davis cashing in with his first in the fourth to give the Cubs a 2-0 lead.

Top @Cubs prospect Brennen Davis kicked his '22 season into gear with one swing for the @IowaCubs: pic.twitter.com/A6ZtGTMHUZ

Buffalo battled back in the bottom of the fourth, picking up a runoff Locke St. John on the Logan Warmoth single as his great series continues. Warmoth wasn't done as he came through in the bottom of the eighth with another RBI single, and just like that, the game was tied heading to the ninth.

Not to be discouraged, Iowa wasted little time retaking the lead as Trent Giambrone's great series continued with a two-run shot-making things 4-2.

With his two-run go-ahead blast, Trent Giambrone is your ?@EMCInsurance? Player of the Game. pic.twitter.com/SMyAXj4Tnj

Aneurysm Rosario was called on for his second save opportunity and allowed a Nick Podkul solo shot, but managed to keep things at bay for the 4-3 win.

We all like the looks of this final score. I-Cubs win! pic.twitter.com/4FgjHzhK2b

Through two games of the AA season, the Smokies have not only looked great, but have yet to give up a run following an 8-0 win with a 3-0 win. Last night, the Smokies tossed a near no-hitter as they allowed just one hit in their victory.

Ryan Jensen got the start and allowed the lone hit in four innings while walking two and punching out four. Brandon Leibrandt, Blake Whitney, and Scott Kobos followed him in the pen as they gave the Smokies five scoreless frames with three walks and eight punchouts.

For the Smokies, all it took once again was one run, and that run came in the first inning. After being held hitless on Friday, Nelson Velazquez wasted little time getting on the board, using an RBI single to put the Smokies on top 1-0. Despite getting 11 hits in the game, the Smokies didn't do a great job of cashing in and had to wait until the sixth inning before getting on the board again.

Nelson Maldonado extended the lead to 2-0 with an RBI double in the sixth before the Harrison Wenson single in the eighth capped off the scoring with a 3-0 lead. Darius Hill, Christopher Morel, Yonathan Perlaza, and Bryce Ball had two hits in the game.

Make it 18 innings of scoreless pitching for your Tennessee Smokies! Another dub for the home team.#Cubs #GoSmokies pic.twitter.com/0z9x3NpdQV

We said from the jump that South Bend may have the best pitching rotation in the Cubs system. Tennessee may have something to say about that through two games, but the Cubs rotation looked great on Saturday with the 2-1 win.

D.J. Herz made his season debut, delivering three innings of one-hit ball to go with five strikeouts as he looks to build off an outstanding 2021 campaign. Max Bain, Brad Deppermann, Jose Albertos, and Jeremiah Estrada all followed Herz, with Deppermann earning the win and Estrada grabbing the save.

It took four innings for someone to breakthrough, and that someone was Quad Cities as they got to Bain in the fourth. Juan Carlos Negret picked up an RBI single with a pair of runners on base, giving the River Bandits the 1-0 and still putting a pair of runners on base. Bain managed to work out of that jam as it was time for the offense to come through.

Much like in the top half of the first, South Bend had plenty of traffic on the bases as Pablo Aliendo delivered an RBI single to tie things up 1-1. Two innings later, the Cubs took the lead for good, with Matt Mervis providing the game-winning sacrifice fly in the 2-1 South Bend win.

2022 has gotten off to a rough start for the Pelicans, continuing with their loss last night. After Brendon Little gave the Pelicans a brief two-inning start, Frank Scalzo Jr game in and got roughed up. Scalzo Jr was only charged with one earned run despite allowing three runs as he struck out six in three innings.

Costly miscues continued to plaque the Pelicans in the sixth and seventh innings as two more wild pitches mixed with a stolen base led to three more runs, with Dru Baker capping off the three-run seventh with an RBI groundout to make things 7-0 in favor of Charleston.

It took the Cubs eight innings to cross the plate, but at least they managed to end the shutout bid. Walks to Malcom Quintero, James Triantos, and Reggie Preciado loaded the bases with one out as they had a golden chance to make things happen. That was followed by an error as the Pelicans pushed across two runs to close the gap to 7-2, which ended up the final score.

The offense was hard to come by with just four hits as Triantos, Preciado, Liam Spence, and Quintero recorded the hits.