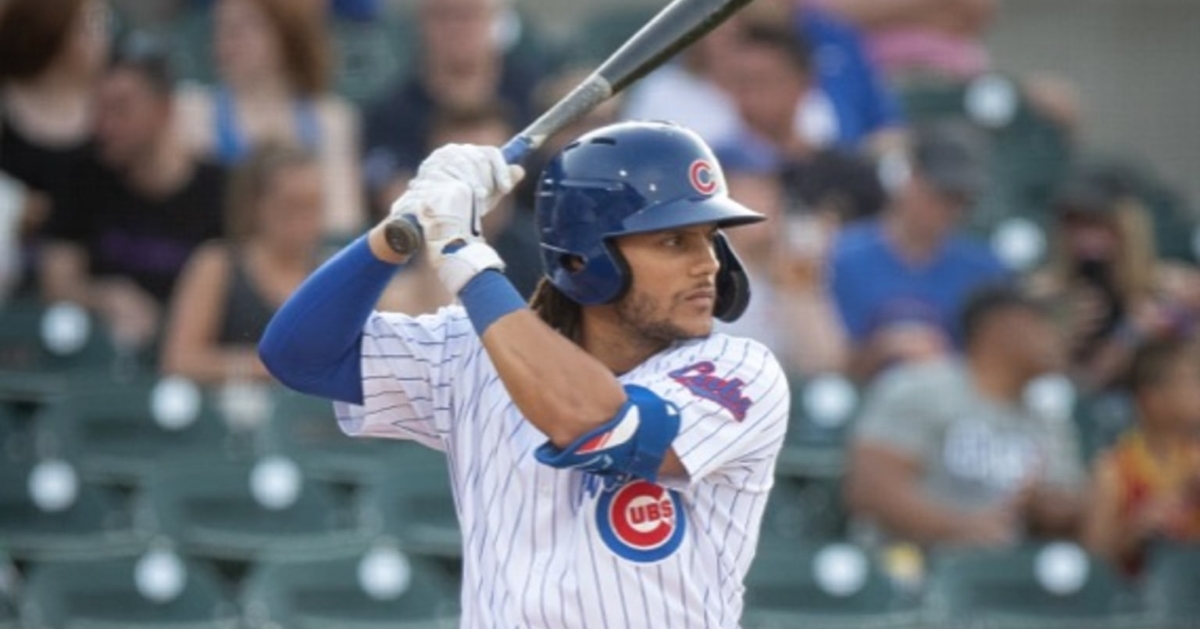 After a strong showing to end the week last weekend, the Cubs opened another week of play with another strong showing going 3-1. Their lone loss was decided by one run, so they came very close to a perfect 4-0 night. South Bend was not in action as they were rained out with a doubleheader set for Thursday.

Perhaps the most promising thing about all the wins last night was the pitching which allowed a total of six runs across the three games. That has been an issue inside the system all season, so to have three games where the Cubs allowed three runs or less to the opposition is a good thing.

The Cubs only needed one big inning to pick up the win on Tuesday, pushing across six runs in the third before winning 9-3. Adrian Sampson overcame a slow start in which he allowed two runs in the first inning to go 5 2/3 innings in the win. The two early runs he allowed were all he gave up as he struck out six in a strong performance.

The Cubs played long ball to open the game, with Michael Hermosillo and Taylor Gushue each connecting for a pair of solo shots to give Iowa the 2-0 lead. With Jose Lobaton injured during the final play of the Cubs vs. Brewers matchup, Gushue could find himself the next backup catcher to take the reins. Speaking of homers, Will Craig had the long ball on his mind in the bottom of the first, going deep for the eighth time this season to tie things up 2-2.

With the game still tied in the top of the third, the Iowa bats came to life as they busted the game wide open. After homering in his first at-bat, Gushue came through with the go-ahead RBI double as the Cubs never looked back. Nick Martini added the game-winning RBI single a short while after, before a bases-loaded walk to Tony Wolters made things 5-2.

With the bases still loaded, Sampson took it upon himself to help his cause as his RBI single-plated a pair extending the lead to 7-2. Nico Hoerner capped off a six-run third for Iowa with an RBI single of his own as the Cubs now led 8-2.

Following Sampson's departure, it was up to the Iowa bullpen to preserve the lead, and for the most part, they were solid.

Gushue had a great night at the plate, picking up a pair of hits to go with his two RBIs. Dillon Maples allowed a seventh-inning run to Cole Tucker on an RBI single as he continues his rehab assignment, but that was the brunt of the damage. A Vance Vizcaino single in the top of the ninth capped off the scoring with the Cubs rolling 9-3.

Hermosillo added a pair of hits in his own right, with nine other players on the Iowa roster recording one hit in the game. Wolters collected one hit to go with a pair of walks as he is also an option to return to Chicago with Lobaton now injured.

We took game one in Indy! Back at the same time tomorrow for game two. pic.twitter.com/FykCsYvWQe

It took long enough, but the Smokies were able to finally silence the Trash Pandas, knocking them off 4-2. After struggling his last few turns on the mound, Cam Sanders took the ball and pitched great. Sanders allowed two runs on just two hits in his five innings of work while striking out four. He did walk four hitters, which has become an issue lately, but he still did enough to win.

Much like the Iowa game, the home run ball was the theme early on, which led to both of Sanders runs coming across in the first as David Mackinnon went deep for the sixth time giving Rocket City an early 2-0 lead. Sanders not only settled in after that, but the rest of the Tennessee staff did, for that matter, holding the Trash Pandas scoreless the final eight innings to give the offense a chance.

Chance rewarded as Christopher Morel put the team on his back early. After putting Tennessee on the board with a solo homer in the bottom of the first, Morel tied things up 2-2 with an RBI single in the fifth. He later came around to score on the Carlos Sepulveda single as the Smokies were in front 3-2. Typically, three runs wouldn't be enough for Tennessee, but their pitching made sure that would hold up.

While it was the Morel show early, it became the Sepulveda show late as he added a much-needed insurance run with an RBI double in the bottom of the eighth to extend the lead to 4-2. Cayne Ueckert took the ball in the ninth and recorded his third save of the season in the 4-2 win.

Morel and Sepulveda provided all the offense the team needed as they combined for four of the teams five hits to go with all four RBIs. Zach Davis added the final hit from the bottom of the order as Brennen Davis, Chase Strumpf, and Darius Hill all went hitless.

Tonight’s game has been postponed. We will play our normally scheduled game tomorrow at 7 pm and Thursday we will have a doubleheader with first pitch for game 1 scheduled for 4 pm.

The one team that gave Myrtle Beach fits last season was Down East. Looking to erase that memory, the Pelicans took to the field for their first meeting of the season and gave Down East all they could handle. Despite a great start from Didier Vargas, who allowed one run in five innings of work, the Pelicans offense was held to just four hits falling 2-1 at home to Down East.

Despite allowing seven hits in total, Vargas was able to pitch around trouble as he struck out five in a solid five innings of work. After a pair of scoreless innings to start the game, Luisangel Acuna put the Wood Ducks in front 1-0 in the third with an RBI single off Vargas. Jonathan Sierra was able to pull Myrtle Beach even in the fifth using an RBI double to knot things up 1-1.

With the game becoming a battle of the bullpens, the Wood Ducks were a little bit better as Dustin Harris picked up a game-winning sacrifice fly off Jose Almonte in the seventh, which sealed the fate of Myrtle Beach 2-1. Offensively, the Pelicans were held in check with just four hits, but Yohendrick Pinango picked up two of those as he continues to show that 2019 was no fluke in the DSL.

Sierra added a hit to go with the lone RBI while Matt Mervis picked up a hit as he seems to be feeling his way out of a slump. Ed Howard and Jordan Nwogu went a combined 0-7 in the loss, while Jarod Wright was impressive in relief, striking out four in two scoreless innings.

Now that the Arizona League has gotten underway, it gives another team to follow. One of the changes this season is that the league is no longer called the Arizona Summer League, but instead the Arizona Complex League. Also, the Cubs will have only one team in that league as opposed to two.

After winning their season opener 7-4 over the weekend, the Cubs improved to 2-0 on the season, topping the Giants 6-3 on Tuesday. The Cubs got an outstanding pitching performance from Luis Devers, Yovanny Cabrera, and Andricson Salvador as the trio combined to allow just one run in six innings. Devers and Cabrera were the more impressive of the three as they each walked one and struck out four in two innings.

Offensively, this is a very important team to follow as more of the Yu Darvish acquired prospects landed on this team. One of those happens to be Reginald Preciado put the Cubs on the board with an RBI groundout in the third before adding a two-RBI single in the fifth. That was part of a three-run fifth inning with Ezequiel Pagan adding an RBI single of his own to have the Cubs in front 4-1.

One inning later saw the Cubs add to their lead as Miguel Fabrizio connected for a two-run double, pushing the lead to 6-1. The Giants tried to rally back in the seventh with a two-run shot from George bell, but in the end, it wasn't enough as the Cubs picked up a 6-3 win.

Preciado has gotten off to a great start going 1-4 with three RBIs. He is now hitting .333 in the early part of the season.

Fabrizio had the best game of everyone on Tuesday, going a perfect 3-3 at the plate with an RBI. Juan Mora joined Pagan and Owen Caissie with one hit, while Rafael Morel and Ronnier Quintero went hitless. Arizona is still waiting to see if Christian Hernandez will wind up with them or stationed in the Dominican League as they await the start of their season.