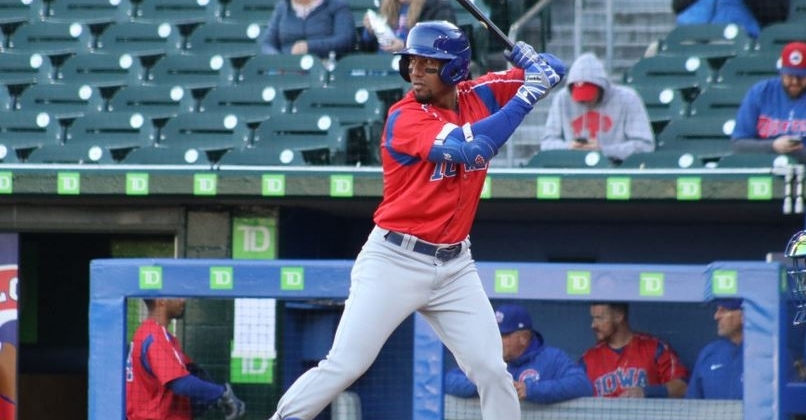 Garcia was impressive despite the sweep (Photo via Iowa Cubs)

After three days of waiting, the brunt of the Minor League schedule got underway as AA, High-A and Low-A began their seasons. For the Cubs, not only were those teams in action, but AAA Iowa had a doubleheader as their Thursday contest was rained out.

From a results side of things, the Cubs managed to go just 1-4, with Tennessee picking up the lone victory. Regardless of the record, this will be an exciting season in the minors as the Cubs have plenty of talent ready to be showcased.

After splitting their first two games of the season, Iowa had their game rained out Thursday, which moved a doubleheader to Friday. Game one didn't go as planned, with Iowa allowing three runs in the sixth inning and falling 7-2.

Adrian Sampson got the call, and his outing went about as bad as his spring. Sampson lasted just two innings, allowing four more than enough runs for the win. After returning to the organization for the first time since 2019, Robel Garcia has gotten off to a great start as his RBI single gave the Cubs a 1-0 lead in the first.

That lead didn't last long, with Samad Taylor picking up an RBI double in the bottom of the first to put the Bisons on top for good 2-1. The Bisons then extended their lead to 4-2 in the third, with solo homers coming from Logan Warmoth in the second and Josh Palacios in the third.

In need of some late-game offense, the Cubs had a great opportunity in the sixth with the bases loaded, but managed to bring just one run across on a Brennen Davis walk. The Bisons put things away in the bottom half of the sixth as Warmoth and Nathan Lukes collected RBI singles while an error led to a three-run inning and a 7-2 win.

We dropped game one, but get a second chance in 30 minutes! pic.twitter.com/3bmAG6gpbU

Game one was undoubtedly a struggle for Iowa, but they were more than up for the challenge in game two. Despite losing 1-0 on the scoreboard, you had to like what you saw from the pitching side of things.

Mark Leiter Jr. made the start and gave Iowa everything they could ask for. In his four innings, Leiter allowed just one run on four hits to go with seven punchouts. He did his part with Rafael Lantigua, picking up the lone RBI hit with a single in the second.

Offensively, this is where things were a struggle as the Cubs managed just four hits. Greg Deichmann, Garcia, Trent Giambrone, and Narciso Crook all had hits in the loss.

The lone team to come away with a win on Friday was Tennessee, and man, did they look impressive. From an offensive side of things, this could be the best roster in the Cubs system, which they showed last night.

The success of this team will hinder the pitching, which was on point yesterday. Not only did the Smokies pitch a shutout, but they did so by allowing just three hits and striking out 14. Cam Sanders got the start and struck out eight in four innings of work while walking two.

He gave way to Bryan Hudson, four strikeouts in two perfect frames, Javier Assad, two innings of one-hit ball, and Brandon Hughes (one inning of work). With the pitching setting the tone, the Smokies offense wanted to return the favor as that was an issue for them last season.

An RBI single by Bryce Ball in the first gave the Smokies the 1-0 lead before Bryce Windham added an RBI groundout. Following a double play that extended the lead to 3-0 in the second, the Smokies benefitted from a crucial error in the third as two more runs came across to score.

With the score still sitting at 5-0 in the eighth, the Smokies wanted to make sure they went out in style. That they did with Yonathan Perlaza adding a two-run single ahead of the Delvin Zinn sacrifice fly to finish things off 8-0. Ball led the offense with two hits to go with his RBI, while Darius Hill, Perlaza, Zinn, and Chase Strumpf added hits. Nelson Velazquez went hitless with a pair of walks and a pair of punchouts.

We dropped game one, but get a second chance in 30 minutes! pic.twitter.com/3bmAG6gpbU

While Tennessee may feature the best offense in the system, South Bend will have the best staff and will be exciting to watch. Chris Clarke was first on the docket, as the right-hander is still searching for his first career win.

Clarke was not at his best on the evening, allowing three runs on five hits in 3 2/3 innings of work before the bullpen came on to give South Bend a chance. Dalton Stambaugh delivered 3 2/3 scoreless innings while adding four punchouts, with Hunter Bigge striking out three in his two innings of work.

Not only did Clarke allow a solo shot to Kale Emshoff in the second, but then allowed the Luca Tresh two-run single in the third to put South Bend in the early 3-0 hole. Credit the Cubs for not giving up as they began to chip away at the lead shortly after.

Trailing by three in the fourth, Fabian Pertuz provided the first runs of the season for South Bend as his homer pulled the Cubs within 3-2. That score would hold until the ninth inning, when 2020 first-round pick Ed Howard tied things up with a sacrifice fly and sent the game into extras.

In the extra frame, the River Bandits put the Cubs away for good as Tresh connected for his second RBI hit of the game off Bailey Reid, lifting the River Bandits to the 4-3 win. South Bend managed eight hits in the game, with Bradlee Beesley, Yohendrick Pinango, and Pertuz grabbing two each. Matt Mervis and Scott McKeon tallied the other two, with Alexander Canario, Owen Caissie, and Howard combining to go 0-12.

The best team in the Cubs minor league system in 2021 was the Myrtle Beach Pelicans. With Buddy Bailey back leading this team, you have to like their chances of being one of the better teams again.

Going with Tyler Schlaffer to open the season, the Pelicans saw the right-hander run into some trouble early as he allowed three runs in just 2 2/3 innings of work. He did punch out five hitters, but when your offense only gives you two runs, the outing doesn't go as planned.

Two of the three runs Schlaffer allowed came in the first inning when Dru Baker unloaded for his first homer of the season and a 2-1 lead. Baker would then add an RBI single in the third, extending the lead to 3-0.

The Riverdogs capped off their scoring in the fourth inning as an RBI groundout followed by a wild pitch saw the Pelicans facing a 5-0 hole. It took seven innings for the Pelicans to score, but better late than never. Not only did Yeison Santana pick up an RBI single in the seventh, but the Pelicans added another run in the eighth off of an error and fell to the River Dogs 5-2.