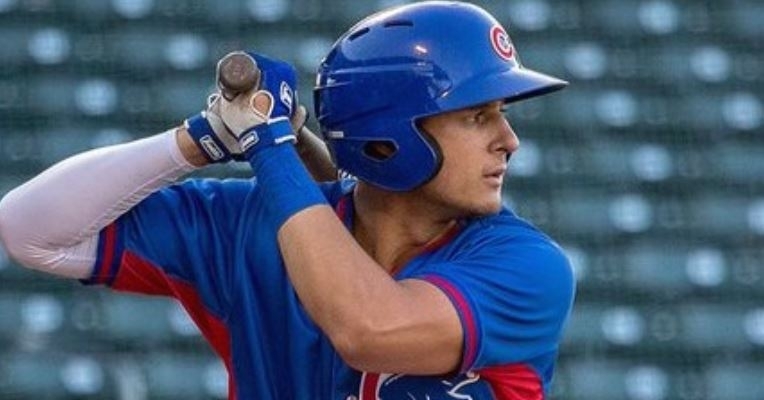 Strumpf with the homer on Saturday (Photo via MILB)

With seven teams playing in six games across Saturday, there was plenty of minor league action to go around. While five of them counted towards overall wins and losses, the results were not great as the Cubs went 2-5 on the day.

That is not how they wanted things to go, but when you get some of the starting pitching they had, that is at least a moral victory to take away. Look for these rosters to start changing across the coming weeks, with the draft and trade deadline expected to play an important role in Chicago.

Although this was a loss for Iowa, they had to love how they have played this week as their offense and pitching have been solid. While the offense was silenced on Saturday, their pitching was not, as they are getting back to solid pitching again.

In what was mostly a bullpen game for the Cubs, Luke Farrell was the first to get the ball going 2 1/3 innings and allowing one run. He gave way to Aneuris Rosario, Blake Whitney, who made his AAA debut, and Michael Rucker, who continues to dominate since his demotion.

For Louisville, it was about Robert Dugger, who gave the bats a much-needed six innings and held Iowa to just one run. That run came in the second inning when Narcisco Crook stole third base and came home on a throwing error to give the Cubs the lead. Unfortunately, that was all the offense for Iowa as the Jose Barrero single tied things up in the fourth before the TJ Freidl homer gave the Bats the win in the fifth.

For the most part, the duration of this series has been evenly matched, with Tennessee coming out on top more often than not. It was another evenly played game on Saturday, but this time Chattanooga did what they needed to win the game.

Ryan Jensen continues to pitch well when making his starts, but hasn't gone more than three innings in a while. It is confusing what the Cubs plans are with him, but he looks good right now. Outside of him, the bullpen did not look good, with Dalton Stambaugh, Jeremiah Estrada, and Danis Correa allowing eight runs in six innings.

The Smokies struck first off an Andy Weber single in the first before both offenses started to awaken in the middle innings.

The Smokies take the lead 1-0 with an RBI single by Andy Weber in the bottom of the 1st! pic.twitter.com/CURxFRacuh

Both teams exchanged runs in the fourth and fifth, with Cole Roederer and Matt Mervis grabbing the RBIs as the Smokies led 3-2.

We'll take what we can get. Smokies take the lead 2-1 thanks to an RBI by Cole Roederer! pic.twitter.com/o7Xx6HCupK

After the Leonardo Rivas homer put the Lookouts up in the sixth, Michael De Leon added a single ahead of the Quincy McAfee single as the Lookouts took a 7-4 lead. The Smokies responded in a big way in the bottom of the seventh, using a solo shot by Mervis and a two-run shot by Chase Strumpf to pull within 7-6.

That was as close as they would get as the Lookouts added another run later in the game to prevail 8-6. Mervis, Weber, and Roederer led the way with two hits for the offense.

Smokies look to finish the series strong tomorrow after they fall 8-6 tonight against the Lookouts. pic.twitter.com/tWxkUEKuFf

Sometimes it only takes one run, and that run took nine innings as South Bend walked off the Chiefs 1-0. DJ Herz was flat-out dealing on Saturday, allowing just two hits in 4 2/3 innings of work to go with three walks and 10 strikeouts. His ERA is now 1.97 on the season.

Adam Laskey followed Herz and made his South Bend debut while Michael McAvene and Hunter Bigge slammed the door shut for a staff that struck out 14 on the day. Logan Gregg was equally as challenging for the Chiefs, giving them five shutout innings before their bullpen held tough the rest of the way.

The game's lone run came in the bottom of the ninth when Fabian Pertuz ripped a walk-off single to left-center as South Bend won 1-0.

Pertuz was responsible for three of the team's eight hits, with Owen Caissie grabbing three hits also. Pete Crow-Armstrong also returned to the starting lineup after missing some time with a finger issue.

Saturday was a weird night on the diamond for the Pelicans and Cannon Ballers as all 10 runs were scored in three innings. Two three-run frames did the Pelicans in while all their offense came in one inning.

Luke Little was roughed up in his two innings of work as command issues played a role in him allowing three runs in two innings. Tyler Santana followed him up and gave the Pelicans five innings of three-run ball, but the offense couldn't come back from a 6-0 hole.

The trio of Jared Kelley, Tyson Messer, and Angel Acevedo dominated the Pelicans through eight shutout innings, collecting eight strikeouts along the way before the Pelicans ninth-inning rally came up short.

Little pitched well in the first, but the second inning saw him run into trouble with Wilber Sanchez and Wes Kath adding RBI singles ahead of a wild pitch to make things 3-0. That score held until the seventh inning, when Wilfred Veras put the game on ice with his three-run shot to make things 6-0.

When you have a record like the Pelicans have, you know you are a good team, and even facing a six-run deficit, no lead is too large to overcome. Malcolm Quintero ended the shutout bid with a sacrifice fly before Jacob Wetzel made things interesting with a three-run shot. That homer was the last of the offense as Frank Hernandez struck out to end the game. The Pelicans had just five hits, with Kevin Alcantra collecting two.

Sometimes it is better late than never, as all nine runs in this game came after the sixth inning. Four runs came in the bottom of the ninth for the Cubs, who secured the walk-off win against the A's.

Marino Santy started things with three shutout innings despite his iffy command. Take that away; the rest of the Cubs staff was solid even though they allowed three late-game runs. It took the Athletics six innings to crack the score column first, with Darlyn Montero putting them up 1-0 with a double.

Down, but not out, the Cubs were not going to go down quietly as Cristian More delivered the game-winning hit by walking things off with a Grand Slam.

The DSL Blue team capped off another week of competition with a disappointing loss to the Orioles. Gabriel Agrazal allowed two runs in four innings, but his 1.13 ERA shows his impressive performance.

Down 2-0 in the third, the Cubs tied things up on the Sandy Sanchez RBI groundout mixed with an errant pickoff throw. One inning later saw them grab the lead as Daniel Ferreira connected for an RBI single to put them in front 3-2.

That lead didn't last long as the Orioles tied things up in the fifth with a homer from Frailyn Abreu before adding two more runs in the 5-3 win.

Despite pushing across four runs in the first, the Pirates offense had the last laugh using a trio of three-run innings to secure the win. There were no complaints about how things started for DSL Red, with Yodel Diaz giving the Cubs a 2-0 lead with a single, followed by Carlos Ramos adding a single and stretching the lead to 4-0 after one.

The Cubs continued to keep the pressure on with an error in the third, but that is when the Pirates started to get things rolling, scoring 11 times across the next four innings. Down 9-5 in the sixth, Jose Escobar added a single to pull within 9-7, but that was as close as the Cubs would get as Isaias Dipre went deep in the bottom of the sixth to make things 11-7 before winning 11-8.

With 10 hits on the day, there were plenty of hits to go around, with Escobar, Ramos, and Daniel Benschoop grabbing two hits to lead the way.