One out of four won’t cut it, and that’s exactly what the Cubs managed to accomplish in Milwaukee over the weekend. Now in San Diego, the Cubs and Friars will play a set of four, as the season sees its final 20 games.

Jason McLeod said when he called Hoerner to tell him he was coming up he was on his couch at home with his mom and sister. He didn’t lose it or anything when McLeod said ‘we need you in San Diego.’ His response: “Let’s do this.”

The Cubs got after it early with a leadoff single by Ben Zobrist, then two batters later, a moon-shot by Nicholas Castellanos. Cubs up 2-zip after a half-inning. The Professor would breeze through the first on only nine pitches.

Hoerner would get his first ML hit in the second, but the Cubs failed to score.

Hoerner would beat out a double-play ball in the fourth, advanced to third on Jason Heyward’s single, then score on a wild pitch to put the Cubs up 3-0.

The Friars would score a pair of their own in the fourth, as the result of a throwing error by Zo (to Hoerner). The first would score on the errant throw, the second on a sac-fly — 3-2 Cubs after four.

The Cubs broke it open in the fifth, starting with a Schwar-Bomb. (#35 for Kyle Schwarber)

Castellanos would single, Victor Caratini singled, then the new kid (NO, not Castellanos, the other new kid) would jack a two-RBI triple.

It was the Nico Hoerner show again in the sixth, this time a two-RBI single. Cubs up 10-2. The Cubs would threaten again in the eighth but would fail to score.

Fly the flag, sing the song. This one was all Chicago, and with the Cards off, the Cubs now move to 4.0 games out of first. The D-Backs lost; Milwaukee won.

Cubs Injury Update: Kris Bryant was out again last night (and maybe out again tomorrow) due to his lingering knee issue. Bryant was given a cortisone shot on Sunday, and KB says it’s helping. KB says that playing at 60-70% is a “disservice to his teammates.”

Addison Russell is in San Diego with the team, but he remains under concussion protocol and was due to see the Padres team doctor sometime yesterday afternoon (no report yet).

Hand specialist confirms that UCL is intact in Javy’s left thumb. Unlikely to play this month, will rehab rest of the way and hope is he’ll come back for playoffs. Unlikely for him to play rest of regular season.

Hoerner Promoted: In the fallout from the injuries to Javier Baez and Addison Russell, the Cubs have promoted their first-round draft pick from 2018- middle-infielder/OF, Nico Hoerner. Hoerner never even saw Des Moines and is being brought up from AA Tennessee. Earlier this year, Theo Epstein stated that in no way, shape or form would Hoerner be brought up this year, but obviously, things have gone from bad to worse.

Nico Hoerner is coming up to Cubs to play SS. Baez, Russell and Dixon Machado are all out, and Nico finished his season playing better than Zack Short. Cubs hope Nico isn’t seen as the season savior. With season on line and 3 weeks to go, they simply see him as their best option.

Hoerner wasn’t on the 40-man by September first, so he’s not eligible for the playoffs. However, the Cubs can petition MLB to be able to add Hoerner by obtaining a waiver under the circumstantial roster issues.

Roster Moves: In addition to promoting Nico Hoerner, the Cubs also recalled RHP James Norwood, while optioning RHP Adbert Alzolay to Single-A South Bend. Much like with Danny Hultzen’s promotion, the Cubs had to DFA someone to make room for Hoerner on the 40-man, and this time, Randy Rosario was let go.

Hoerner’s MLB debut: They say the ball always finds the new guy, and it found Hoerner all night. The kid was flawless, and these weren’t just routine grounders- Hoerner was making backhanded stabs, sliding plays, you name it. As far as the offense was concerned, He went 3 for five at the plate, with a triple, two singles, 4 RBI and two runs scored.

Pay attention gang, I’m telling you, this kid is the future (as in next year) middle infielder.

Posturing for 2020: Some teams around MLB have already started positioning themselves for 2020, already making very authoritative statements about the way things will be, moving forward. Late Sunday, the Red Sox fired Pres. of Ops., Dave Dombrowski, just a year after winning the World Series.

Baseball Quotes: You can wake up every day and make today better than the last.” -Tommy Lasorda 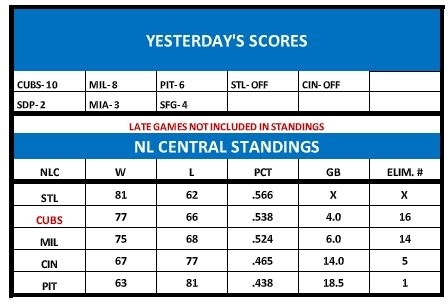