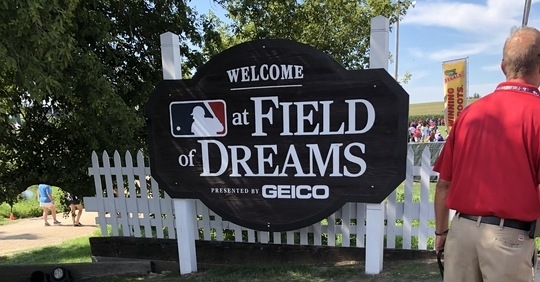 Most all baseball fans have seen the movie "Field of Dreams" starring Kevin Costner. Some of it think of it as just a baseball movie, but the true meaning of it is spending time with your Dad or family. Who doesn't shed a tear at the end of the movie when Kevin Costner's character Ray Kinsella plays catch with his father?

I was lucky enough to go to The Field of Dreams game Thursday between the Chicago Cubs and Cincinnati Reds in Dyersville, Iowa, with someone very special to me-my, my uncle Steve. My uncle is the greatest baseball fan I know. He has been to most of the stadiums around major league baseball and also watches a ton of minor league, Arizona Fall League, and college baseball. He also has seen Major League Baseball playoff games, Major League Baseball All-Star games, and has even seen no-hitters live. So, when he says it was one of his top three experiences, you know it was special.

When Major League Baseball announced last August that the Cubs would be playing in The Field of Dreams game, knowing he lived in Iowa, I immediately called him and asked if he wanted to go. I was thinking this will add to the list of great Cub games we have seen after watching them play the Yankees in 2003 and watching Roger Clemens go for his 300th win, the Red Sox in 2005, and the cross-town series vs. the White Sox in 2006. He at first wasn't sure, but after talking to him, he decided to go.

As we made the hour and 1/2 drive from his home to Dyersville, we couldn't have picked a better night. No clouds in the sky, very little wind, just a perfect night for baseball. We pulled up to the field and the house that was in the movie, and it was awesome seeing everyone playing catch, and heck, since it was in the middle of a corn field, free corn was given out. You also saw people dressed up as old White Sox players from the movie, people sitting on the old wooden bleachers watching, and people walking out of the cornfield.

Then as I made the quarter-mile walk from the field in the movie, through the cornfield to the field for the game, you could see the cutouts of the players and famous words being spoken over a speaker, "If you build it, he will come." Then arriving at the stadium, seeing how perfect the infield and grass were, watching Ken Griffey, Sr. and Ken Griffey Jr. walk out through the corn field, and Ken Griffey Jr. saying, "hey, dad want to play some catch?" Then after that, seeing my favorite player of all time, Andre Dawson and other Hall of Famers, Ryne Sandberg, Ferguson Jenkins, Lee Smith, Johnny Bench, Barry Larkin, and Jenkins, throw out the ceremonial first pitch to Bench, I knew I was in heaven.

Then as the Cubs scored three runs in the first inning, I was thinking, wow, I might see a win! Then the game progressed, and the Cubs still held on to their lead. It was special sharing stories with fans around me and hearing their memories too. Then as Harry Caray led the seventh inning stretch, the sunset and the full moon appeared. The night couldn't have been better except for one thing, a Cubs win. The Reds were able to close the gap to 4-2, but Rowan Wick was able to slam the door in the ninth inning to preserve the Cubs win.

As my uncle and I made the drive back to his house, we reminisced about the special night and were glad that we went because Major League Baseball announced earlier in the week that there would be no game there in 2023. The one we saw could very well be the last one there, and even though the Cubs are bad this year, how lucky it was to see our favorite team play there.

So, after being lucky enough to see the Cubs play in the World Series, NLCS, NLDS, Little League Classic, and many other classic and special games, I would have to say that the game and moment rank very highly for me also. The main lesson I learned from the trip, though, is the meaning of the movie. It's not about baseball; it's about family. If you have a chance to spend time with your dad or someone else close to you special, do it, take a trip with them, and go play catch because you never know how many times you will get the chance.

As my uncle dropped me off at the airport, we said our goodbyes. I'll never forget the words he said to me. "I'm glad you talked me into going."