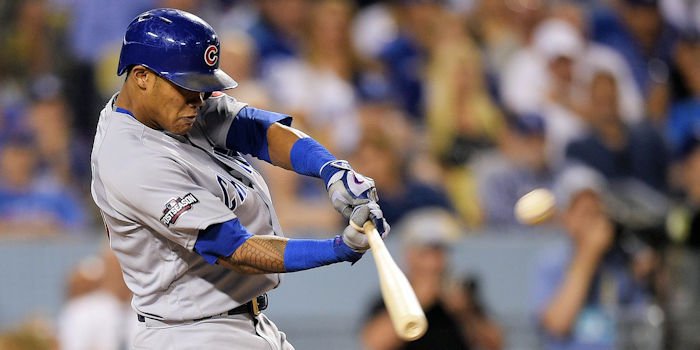 LOS ANGELES -- HOLY COW! Cubs win another breathtaking game in the postseason that was very close and tense early on. However, Cubs shortstop Addison Russell hit a go-ahead two-run homer off of reliever Joe Blanton in the sixth inning to put the Cubs up 3-1 in game five of the 2016 NLCS playoff series. The Cubs ended up winning 8-4 in the critical game. It was the second consecutive game that Russell has homered against the Dodgers, and he becomes the second Cubs player alongside Kyle Schwarber to hit homers in consecutive games at the age of 22 years or younger. Russell missed last season's NLCS with a hamstring injury.

Rizzo started the scoring in the first inning with a RBI double on a line drive to right fielder Yasiel Puig to score Dexter Fowler. Rizzo's hit was 111.1 MPH which is the third hardest hit ball by the Cubs in the playoffs. He was also 4-for-4 in his first four at-bats since borrowing Matt Szczur's bat.

The next two inning was a pitching affair as both starting pitchers looked a little flustered over the inconsistent strike zone but did not give up any runs.

In the fourth inning, Javier Baez smoked a double that hit the left field wall and became the third Cubs player with Ryne Sandberg and Mark Grace to have three doubles in a single NLCS. Kenta Maeda was pulled after getting David Ross to fly out with two outs in the inning after only 76 pitches. It was a strange move by Dodgers manager Dave Roberts to take out Maeda because Jon Lester was up with two outs in the inning. However, the move worked as Lester hit a deep fly to left field for the out to keep the score at 1-0 Cubs.

The Dodgers tied the game in the fifth inning with a RBI groundout by Adrian Gonzalez that scored Howie Kendrick.

Kris Bryant had a double in the bottom of the inning which gave him ten postseason extra-base hits in his career which is the most in Cubs history. The ball off of his bat was struck 107 MPH and went 383 feet to center field. However, the Cubs left him stranded on second base with Rizzo striking out and Zobrist smacked a ball to right field but was caught by a running Puig who got a fantastic jump on the ball. After that at-bat, the Cubs were 0-7 with runners in scoring position.

So everything was tense, and then the play of the game happened for the Cubs. Cubs shortstop Addison Russell crushed a crucial two-run homer in the sixth inning to put the Cubs up 3-1.

Lester pitched a gem going seven strong innings giving up only five hits, one run, one walk, and six strikeouts on 108 pitches. In the postseason, he has a 0.86 ERA and 0.76 WHIP in 21 innings. He also has a 0.96 ERA in four starts this season against the Dodgers.

Dexter Fowler got a RBI single for an insurance run to put the Cubs up 4-1 in the eighth inning. He beat a foot race with Adrian Gonzalez to the first base bag with the infield hit up the middle. Then the offensive floodgates opened as Baez crushed a three-run double to right field to put the Cubs up 8-1 as the Dodgers fans left the game in massive numbers. He is 13-for-35 in the 2016 playoffs.

Baez appeared to feel his hamstring tighten up when he put on the brakes after settling for a double. However, he stayed in the game after a quick look from the trainer.

Pedro Strop gave up a run in the eighth inning and then the 'Cuban Missle' Aroldis Chapman gave up three runs in a non-save situation in the final stanza.

Pivotal game six of the series in which the Cubs can clinch a World Series berth for the first time since 1945 will feature righty Kyle Hendricks for the Cubs while the Dodgers will pitch Clayton Kershaw.