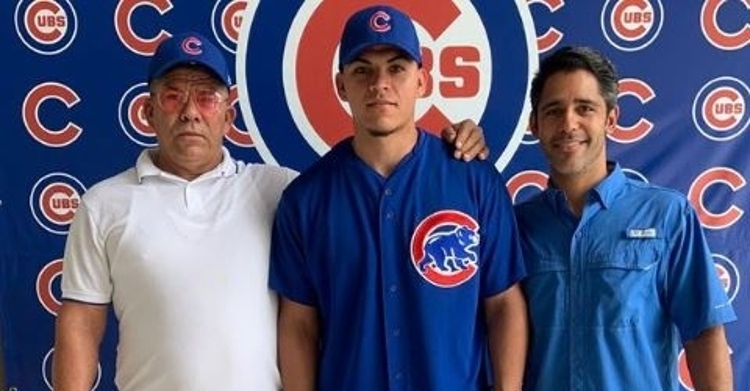 Gonzalez has the potential to be a solid pitcher (Photo courtesy: Ben Balder)

Although the Cubs major league roster has been less than appealing thus far, their minor league teams have been doing exceptionally well. A big reason for that is an influx of new talent the past two seasons that have taken their farm system from one of the worst to top 10 status again.

The Cubs have inked 19-year-old Cuban Right-hander Yoendris Gonzalez to a contract as he recently was posted for MLB teams. I know what you are thinking. This is just one of those flyer signings to add depth to an already deep system.

While you may be right to a point, the Cubs don't just sign these players unless they feel they can bring something to the table, and Gonzalez fits that mold. Not only is he just 19 years old with plenty of time to grow and develop, but he is already touching 97 MPH with his fastball.

If you remember the movie, the Rookie with Dennis Quade, one of the scouts said, "If I call and say I have a guy throwing who is twice these kids age, I would get laughed at. However, if I don't call in a 97 MPH fastball, I will get fired."

19 years old or not, He is touching 97 MPH with his heater, and that alone is worth a look, especially when you look at the potential of more velocity. For someone who throws so hard at such a young age, I find it hard to believe he was left on the international market for so long.

Not only that, typically, players with his talent sign for seven-figure bonuses, so the fact that the Cubs got him so cheap is a steal, but also a mystery. When talking about international free agents, you have to consider that pitchers almost always arrive later than position players, who tend to have deals done a few years in advance.

You also have to look where Gonzalez is from, Cuba, and that alone makes it harder for teams to scout him regularly. Cuban players tend to arrive on the International market later than the other Caribbean-born players because they are not scouted as often as others.

When it comes to Gonzalez and this signing, he was found in both instances where teams were not able to get a ton of film on him, and he didn't post right away due to a high volume of Cuban hitters before him. Don't get me wrong; the Cubs are happy he was still available because they can do a lot with him at this point.

Not only is he young, but he throws hard, which will give the Cubs plenty of opportunities to work with him and see what he can do. Don't expect him to arrive stateside or in a full-season ball for a year or two. Like most IFA players, Gonzalez will likely open the season in rookie ball pitching for one of the Dominican Complex league teams.

It is that moment when you get a good sense of the type of pitcher he is and who he can be, as that will be the first chance for many teams to see him in-game action. If all goes well and he lives up to the hype, you could see the Cubs bring him stateside for the fall and winter and use him in the instructional league.

Either way, this is one of those IFA signings worth noting because of the potential he has. We will have a lot more coverage on him once the DSL season gets underway and he has a chance to throw on a more frequent basis.

He left Cuba in 2019 and has reached 97 mph with his fastball, also has curve, sinker, slider in his staff.

Cuban #23 who is signed in the current international signing period. pic.twitter.com/M7gngVtxIA