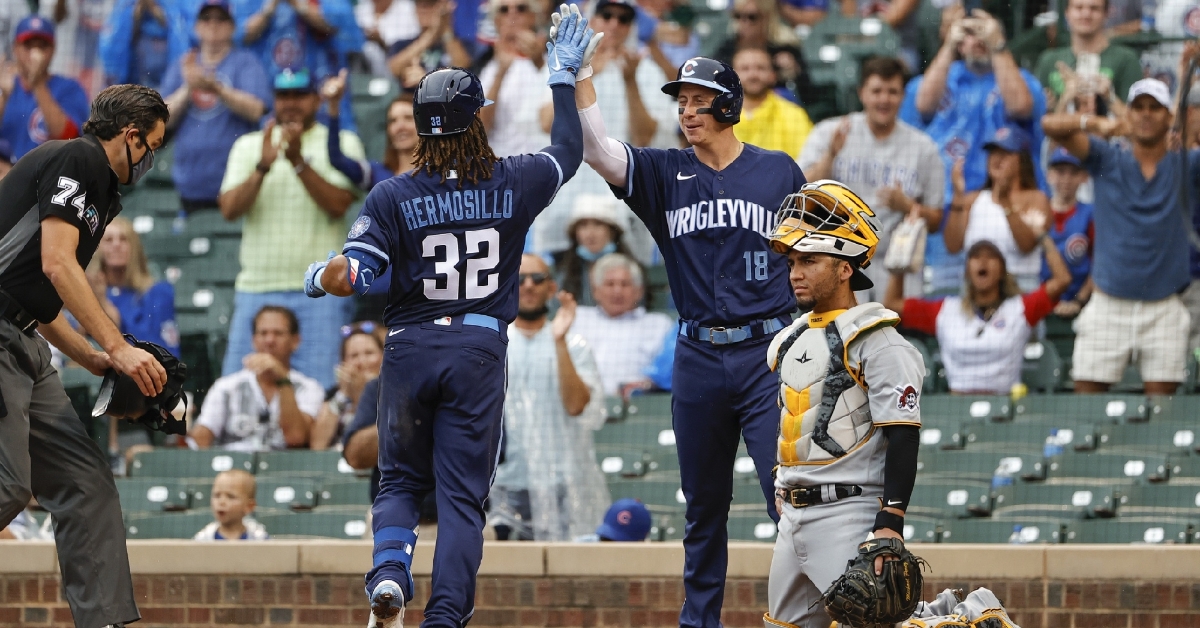 CHICAGO – Don't look now, but the new-look Chicago Cubs (61-75) have figured out how to win baseball games again. In front of the Wrigley Field fans on Friday afternoon, the Cubs topped the Pittsburgh Pirates (48-87) 6-5 for their second straight win by that score, making it four consecutive wins for this team.

I get that these wins have come against both Minnesota and the Pirates, but when you look at how rough August was for the Cubs, it is nice to see this team having fun and playing with confidence again. Alec Mills was looking to build off his last start against the White Sox as he took the ball against Steven Brault. Brault has historically struggled against the Cubs, but has been much better of late as he was looking to keep that stretch going himself.

Instead, the Cubs greeted him rudely as they chased him after just four innings after allowing five runs on seven hits. Michael Hermosillo played a significant role in that going a perfect 3-3 off Brault, including doubles in each of the first two innings, with the second double bringing home a pair to put the Cubs up 2-0. Hermosillo would come around to score later in that inning off a Frank Schwindel single as the Cubs held a 3-0 lead after two.

With Brault struggling to put away Cubs hitters, the Cubs needed to keep the pressure on. That was precisely what they did with Austin Romine grabbing an RBI single in the bottom of the third before Hermosillo put one on Waveland Ave in the fourth to give the Cubs a 5-0 lead. That appeared to be more than enough runs for Mills, who was once again impressive on the mound giving the Cubs 5 2/3 innings of work, surrendering just two earned runs.

Those runs came in the fifth inning when Anthony Alford and Hoy Park hit homers to pull the Pirates within 5-2. Despite five great innings on the mound, Mills ran into some trouble in the fifth and eventually was pulled before getting through six. The Cubs defense did him no favors as a costly error not only allowed for a third run to score, but extended the inning where Alford homered for a second time to tie things up 5-5.

Mills was on the hook for all five of those runs, but three of them were unearned as he put together another solid line before handing things over to Trevor Megill and the pen. Say what you will about the direction of this team, but for the better part of the last two weeks, the Cubs bullpen is starting to put it together once again, which has led to better results.

The bottom of the sixth saw a former Cubs reliever in Shelby Miller take the mound, hoping to keep things tied. What better way to return to the Wrigley Field mound than by serving up a game-winning homer to Schwindel, who continues his extraordinary run with the Cubs. After Megill got through the seventh, Codi Heuer and Rowan Wick were called on to finish the game, which they did as the Cubs bullpen tossed 3 1/3 hitless innings to secure the win.

For the most part, the Cubs have been very fortunate regarding COVID as they have been the one team not affected by it this season. Going back to last season and Chicago was the only team without a single positive test which goes to show you have well the organization has done managing this difficult time.

Well, their run of success ended on Friday as team President Jed Hoyer and Manager David Ross have indeed tested for COVID and must now quarantine away from the team. Thankfully, both men are in high spirits and feel fine as they have been vaccinated before the start of the season.

While the Cubs don't have an acting GM who could fill in for Hoyer, Bench Coach Andy Green will step in for Ross for the remainder of the weekend and will manage the Cubs. Green has had some success posting a 6-4 mark in 10 games as a fill-in manager for the Cubs the past two seasons.

When the Cubs called up Hermosillo, they wanted to see what he could do at the big-league level. After playing around 50 games in AAA, Hermosillo had nothing left to prove, hitting .309 with 10 homers and 29 RBIs during that time. Not expected to be an everyday player down the stretch, Hermosillo could find his way into the Cubs plans next season as a platoon player for various reasons.

The biggest reason was on display Friday as Hermosillo went 3-3 against Brault, including three RBI's. That has been his biggest reason for his success at the AAA level this year, as he hit near .400 against southpaws this year. That will be the primary role he fills on this Cubs roster as Rafael Ortega has just two hits against lefties all season.

Hermosillo was also once a top 20 prospect in the Angels system, so there was a lot to like about him before. Now with a chance to showcase his stuff once again, Cubs fans will be chomping at the bit to see what he can do on a more regular basis.

This team is actually fun to watch

As tough as it was to watch the core players go and as rough as things have been since, this team is starting to play with confidence again, and it has been a breath of fresh air. Instead of having a bunch of players in contract years failing to prove why they deserved an extension, you have a group of unproven vets just hoping to land a job next season.

Ortega, Schwindel, Hermosillo, Matt Duffy, and even Patrick Wisdom have never been given a chance to be everyday players in the past, but with the Cubs, they are getting that chance. Not only that, but when given an opportunity, they have been producing rather consistently, especially when it comes to Wisdom and Schwindel.

While most, if not all, of these players will land as role players next season, some are proving they belong in this league and are giving the Cubs plenty to think about next season. Wisdom is in the rookie of the year conversation, Schwindel continues to hit the ball well, and Ortega has emerged as the team's everyday leadoff hitter. All three were signed to minor league deals this season, and look at them now.

Should their play continue for the remainder of the season, all three should be considered on next seasons roster for whatever positions are available. Stories like these speed up a team's rebuild, which is exactly what the Cubs are hoping for.