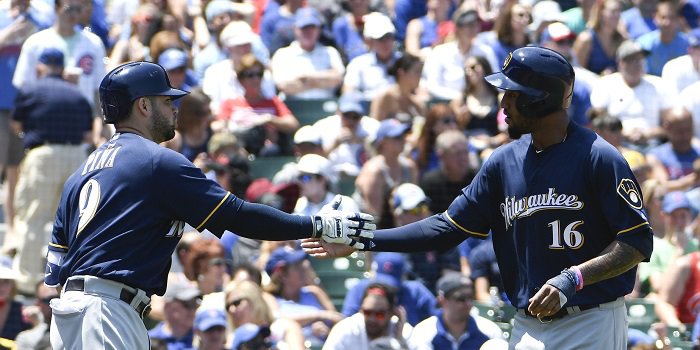 Outfielder Jon Jay was forced to pitch for the Cubs on Thursday. That speaks volumes on the Brewers' dominance at the plate in their commanding victory. Photo Credit: David Banks-USA TODAY Sports

CHICAGO – After Thursday's beatdown, the Chicago Cubs probably wish that their rainout in a game against the Milwaukee Brewers earlier this season was all but forgotten by the powers that be with Major League Baseball because the makeup contest definitely did not work in Chicago's favor. Falling 11-2 in front a disappointed Wrigley Field crowd, the Cubs were wrecked by their National League Central rivals, hampered by yet another dismal performance in a starting capacity for pitcher Mike Montgomery. Furthermore, with the exception of a practically worthless round-tripper by catcher Willson Contreras, the Cubs were listless on the offensive end, as well, contributing to one of the worst all-around performances by the North Siders this season.

Montgomery was putrid on the hill, potentially solidifying a likely move back to the bullpen for the 28-year-old left-hander. Lasting a mere 2.1 innings, Montgomery was charged with seven runs in his ill-fated outing, essentially cementing the Cubs' fate before the Cub hitters had an adequate opportunity to produce. The Brewers pounced from the start, scoring two runs in the first frame. Milwaukee right fielder Domingo Santana struck first, hitting an RBI double to put the Brewers on the board. Santana wreaked havoc upon the Cubs on Thursday, going 4-5 with two RBI and three runs scored.

Santana was brought home later in the first on a single by left fielder Hernan Perez, which set an ominous tone for the Cubs, as they faced an early 2-0 deficit that would multiply two innings later. Fitting with the theme of the first inning, Santana incited the scoring for the Brew Crew in the third, as he drew a one-out walk and was scored soon after via a two-run homer off the bat of Brewers slugger Ryan Braun, marking the left fielder's 10th long ball of the season. Montgomery proceeded to implode after falling down 4-0, giving up three consecutive singles, the third of which, a hit by catcher Manny Piña, drove in a run.

Cubs manager Joe Maddon had no choice but to pull Montgomery at that point, bringing forth a baptism by fire situation for recently-called-up reliever Jack Leathersich. Leathersich, who joined the Cubs' 25-man roster just two days ago, proved to be in over his head, as he walked three batters in a row to start his stint, with the latter two resulting in runs for Milwaukee. Leathersich eventually got out of the inning but not before allowing the Brewers' lead to increase to nine runs. Appropriately enough, Santana capped off the five-hit, seven-run inning with an RBI double, his second two-bagger of the game.

A whopping 13 at-bats took place in the top half of the third, and the five hits accrued by the Brewers nearly topped the six-run hit total that the Cubs compiled over the course of the entire game. Not a single Chicago batter collected multiple hits on the afternoon, and the lone offensive highlights were a meaningless opening-inning double by first baseman Anthony Rizzo and the aforementioned solo shot by Contreras, his 11th dinger of the season. Starting pitcher Zach Davies produced a solid six-inning showing on the mound for the Brewers, giving up two runs on five hits and zero walks. Of course, Davies received plenty of run support, which made for a fair share of breathing room to aid his efforts, but his start deservedly resulted in a win for the righty, moving him to 10-4 overall.

Exemplifying baseball's version of too little, too late, the Cubs were unable to make an impact at the dish until the 9-0 trouncing was in place, as their first run did not come until a fielder's choice groundout by third baseman Kris Bryant occurred in the bottom of the third. The Cubs could have easily scored more runs in that inning, as they had a bases-loaded, no outs situation working in their favor, but following the Bryant grounder, the next two batters failed to hit the ball out of the infield, leaving two runners stranded.

The Contreras home run, though worthy of commendation, was essentially fruitless, coming in the fourth inning to make the score 9-2 in favor of Milwaukee. It also proved to be the last instance of offensive production for Chicago on the day, as a measly seventh-inning single by right fielder Jason Heyward was the only hit garnered by a Cub thereafter.

The Brewers, meanwhile, further padded their lead by adding two more runs to their already-gaudy total off of Cubs reliever Justin Grimm in the fifth inning. Putting a damper on his home run from the inning prior, Contreras committed a throwing error on a double steal that allowed Brewers second baseman Jonathan Villar to score his second run of the game. That marked the second costly throwing error on a steal attempt by Contreras in the past three games. The second-year backstop now has 12 errors to his name this season. Capping off the Brewers' run-filled fiesta was none other than Santana, who came home on a single by Milwaukee first baseman Jesus Aguilar, which was one of Aguilar's three hits in the game.

Epitomizing the lopsided nature of the affair, Cubs outfielder Jon Jay, who struggled to throw a pitch over 60 miles per hour, received the nod to pitch in the ninth inning, as Maddon found no reason to utilize an arm out of the bullpen in a nine-run blowout. The Brew Crew finished with 13 hits in all, making the most of them by amassing a double-digit run total in their 11-2 rout of the Cubs. With the win, the Brewers have now trumped the Cubs in six of nine contests between the two divisional foes in 2017. Needless to say, Montgomery was named the game's loser, dropping his record to a pathetic 1-6 and possibly bringing an inglorious end to his woeful attempt at bolstering Chicago's starting rotation.

If questions did loom in the minds of baseball fans before Thursday's game regarding whether or not the Brewers, who have stood atop the NL Central standings for quite some time now, were indeed superior to the defending champion Cubs, today's contest certainly should have answered them. Now holding a 4.5-game lead over Chicago (42-43), Milwaukee (48-40), through their dominant beatdown, served to further indicate that the wishy-washy Cubs, as unbelievable as it may seem, are far from a legitimate power in the National League right now and could very well find themselves out in the cold when playoff baseball rolls around this fall.