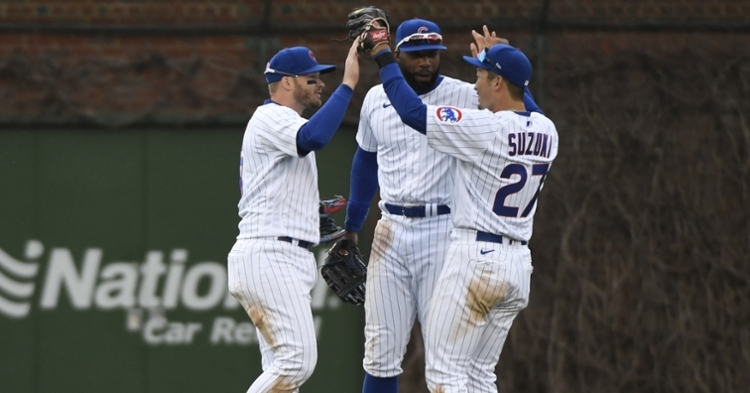 Expecting things to be a rebuilding year, the Cubs got a great first test as they welcomed the defending division champion Milwaukee Brewers (0-1) to town. In a match-up that featured 2021 NL Cy Young winner Corbin Burnes and Kyle Hendricks, you had about as much of a polar opposite as you can have on the mound.

Knowing how nasty Burnes can be, Hendricks was up to the task early, striking out four Brewers over the first two innings and allowing just one run in 5 1/3 innings. Burnes was not as sharp as he finished with just three punchouts to go with three walks and three earned runs in five innings of work.

Had it not been for a seventh inning bullpen meltdown where Daniel Norris and Chris Martin ran into trouble which prevented Hendricks from earning the win. However, a clutch two-run double in the bottom of the seventh off the bat of Ian Happ proved to be the difference as the Cubs held off the Brewers for the 5-4 win.

Neither team had much of anything going in the first inning, but the Brewers were threatening in the second. Andrew McCutchen led things off with a double before a two-out Omar Narvaez walk put a pair of runners on base. Hendricks managed to pitch around that jam as the score remained 0-0.

The Cubs had a similar situation in the bottom half, with Ian Happ leading things off with a double, followed by a one-out Seiya Suzuki walk. Like the Brewers, the Cubs couldn't come away with the big hit stranding both runners. Two innings later saw the Brewers crack the scoreboard first as they began to figure out Hendricks.

Another leadoff hit by McCutchen started things off before Hunter Renfroe singled to put a pair of runners on base. Following a hit by pitch to load the bases, Lorenzo Cain manufactured a run with a roller to first as the Brewers struck first for the 1-0 lead.

With Burnes officially settled in on the mound, the Cubs were looking to strike back, which they did in the bottom of the fifth. It started with Suzuki picking up his first career hit with a single before Jason Heyward ripped one to center to put runners on the corners. One batter later, Patrick Wisdom was doing what he needed to as he drove one to center field for the sacrifice fly, tying things up 1-1.

One batter later, Nico Hoerner lined a Burnes slider over the left-field fence for his first homer since 2019, and just like that, the Cubs led 3-1. With Daniel Norris and Aaron Ashby on to pitch the sixth, the Cubs had another great opportunity, but could not cash in, sending things to the seventh 3-1.

In that seventh inning, things began to get dicey as Norris was on to start things. Cain smoked a double to open the inning before a walk to Mike Brosseau gave the Brewers a pair of runners with no outs. One batter later, Kolton Wong grounded one over to force base as a bobble by Frank Schwindel forced the Cubs to take the force out.

To make matters worse, Norris appeared to roll his ankle on the play, which signaled the call for Chris Martin. Facing Willy Adames to start his outing, Martin got a little too greedy and saw Adames rip his two-seamer down the line for an RBI double, making things 3-2. The next batter was Christian Yelich, as he got just enough of an offspeed pitch to drive it to left field as Wong came across to score.

Usually, this would be when the Cubs would cave in, but this is a different team as they didn't let the rough top half of the inning discourage them. A one-out pinch-hit double by Clint Frazier set the offense up with the go-ahead run in scoring position.

Still standing on second and with two gone, Willson Contreras extended the inning as another Brewer pitch hit him. Needing a big hit to take the lead, Happ came up huge all game long as he finished with three hits, including a pair of doubles. His second double was the biggest hit of the day as he drove it off the Centerfield wall to put the Cubs back in front 5-3.

Hoping to finish things off, Rowan Wick was called on to pitch the eighth and immediately allowed a Rowdy Tellez hit to open the frame. Two batters later, a familiar face in Victor Caratini laced a double as the Brewers now had the tying run at second.

After allowing a sacrifice fly to Cain to bring the Brewers within 5-4, Mychal Givens was summoned to finish off the inning and did so by striking out Brosseau. With just three outs standing between them and a win, it was time for David Robertson to come in as David Ross gave him the first save chance of the season.

Despite allowing a one-out single to Adames, Robertson was brilliant as he struck out Yelich to make quick work of the Brewers, picking up his first save of the season. Happ led the Cubs offensively as he collected three hits to go with his two RBIs. Heyward added two hits, with Hoerner, Frazier, and Suzuki grabbing hits. Martin secured the win in his Cubs debut.