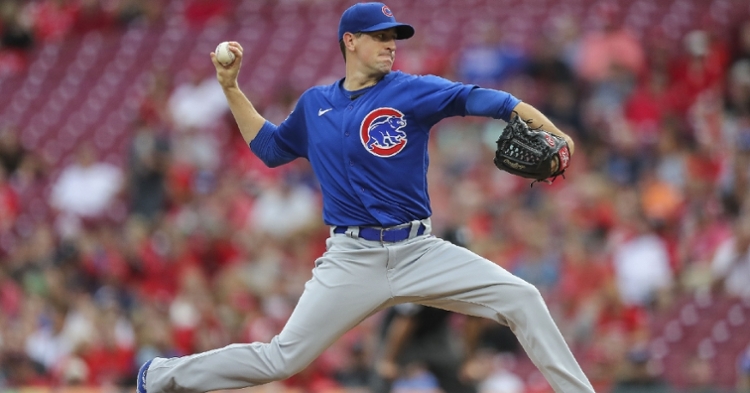 CINCINNATI — Thanks in large part to a solid six-inning outing by Kyle Hendricks, the Chicago Cubs (53-69) snapped their season-long losing streak at 12 games, preventing it from extending to 13 with a win over the Cincinnati Reds (65-56). Hendricks gave up just one run, which was scored via a homer by former Cub Nicholas Castellanos, and the Cubs' bullpen held the Reds scoreless, with the Cubs outhitting the Reds 11-5 and winning 2-1 at Great American Ball Park on Tuesday. The Cubs' two runs were scored via a Frank Schwindel double and an Ian Happ dinger. Hendricks earned his MLB-leading 14th winning decision on the evening, and his record now stands at 14-5.

Vladimir Gutierrez started on the bump for the Reds, and he gave up a base knock to Schwindel in a scoreless first. Following a Joey Votto walk, Castellanos ended the first by grounding into a double play. Andrew and Austin Romine became the first brothers to start in the same game for the Cubs since 1894, as they started for the same team in the same game at the big league level for the first time ever. Bote and Austin Romine, who started at catcher, singled in the second, but Andrew Romine, who started at shortstop, then grounded into an inning-ending double play.

Hendricks worked around a leadoff walk of Tyler Stephenson in the second. Rafael Ortega drew a leadoff walk in the third and scored on an ensuing double by Schwindel, who leads the majors with 10 extra-base hits since Aug. 5. Happ advanced Schwindel to third via a single, but yet another inning-ending double play followed, with Patrick Wisdom grounding into it. Bote, who started at second base, made a nice barehanded play on a slow roller hit by Jonathan India with two outs in the third, as he charged the ball and fired a sidearmed throw to Schwindel after barehanding it, resulting in India being outed just in the nick in the time. Shogo Akiyama answered Bote's defensive feat with one of his own when he hauled in a leaping grab in front of the wall in center to rob Jason Heyward of a leadoff hit in the fourth.

Making an impact at the plate in the fifth, Hendricks swatted a bloop single that fell into no man's land in right-center. He gave up his first hit of the night on a Tyler Naquin single in the fifth. The half-inning began with Mike Moustakas drawing a leadoff walk prior to Kyle Farmer grounding into a fielder's choice. Naquin's base hit advanced Farmer to second, but the Reds failed to score in the frame. Happ took Gutierrez deep to lead off the sixth, as he smacked a long ball out to right. Castellanos returned the favor with a two-out solo shot, which carried 412 feet out to right-center, in the home half of the sixth.

Yo his name is Nicholas and this is ridiculous. pic.twitter.com/5qDdWzi9pQ

Matt Duffy drilled a double off the wall in left with one out in the top of the seventh, and erstwhile Cub Justin Wilson then replaced Gutierrez on the mound. After getting called up earlier in the day, Michael Hermosillo pinch hit for Ortega and flied out. Schwindel proceeded to ground out, with third baseman Mike Moustakas making an impressive play that stranded Duffy and sparked an amusing reaction from an impressed Schwindel.

Rowan Wick relieved Hendricks to begin the bottom of the seventh and got taken for back-to-back singles by Farmer and Naquin out of the gate. Akiyama struck out, and pinch hitter Tucker Barnhart was then hit on the elbow guard by an inside pitch, which frustrated Wick, as he felt that Barnhart made no effort to avoid getting plunked. Nevertheless, the hit by pitch loaded the bases, but Wick kept his composure and struck out India. Adam Morgan was brought out of the bullpen, and he forced Votto to hit a ground ball up the middle that resulted in an inning-ending putout at first.

Like Wick, Luis Cessa gave up two consecutive singles to begin his outing, as Happ and Wisdom reached via base knocks in the eighth. Wisdom's bloop hit arguably should've been caught, as Farmer, who manned shortstop, was unable to glove the flare while falling down after multiple Reds converged on the popup. Cessa struck out Heyward thereafter, and Bote then grounded into an inning-ending double play, an outcome that proved to be a major theme of the contest.

Codi Heuer needed just eight pitches to retire the side in order in the eighth. Andrew Romine was walked by Tony Santillan with one out in the ninth, but Santillan threw him out at second on a failed steal attempt to usher in the bottom of the ninth. Using only nine pitches his next time out, Heuer recorded his first save as a Cub by pitching a 1-2-3 ninth and finishing off the Cubs' 2-1 victory, which turned a 12-game losing streak into a one-game winning streak.

Codi Heuer recorded his 1st save with the @Cubs tonight! pic.twitter.com/N5ARJ4g7Lm