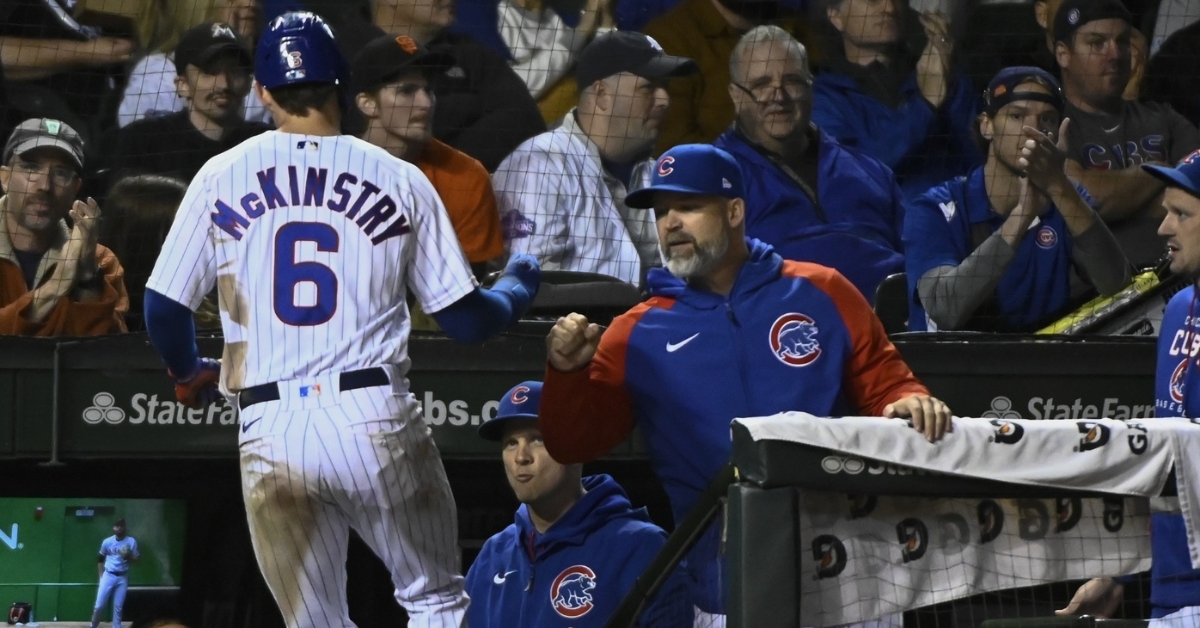 CHICAGO - When this week began, and you looked at the homestand the Chicago Cubs (58-82), you had to like their chances of coming away with a winning mark. Instead, after losing two of three to the Reds and splitting the first two games with the San Francisco Giants (67-73), the Cubs needed to win Sunday to walk away with a split.

With the Giants going with a bullpen approach, David Ross elected to go with the Wade Miley and Hayden Wesneski piggy-back for the second time after it worked so well the first time. Miley was impressive, but Wesneski had a tougher time this time as the Giants took the series finale 4-2 and guaranteed the Cubs would finish with a losing record this season.

For Miley, it has been a struggle this season in terms of injuries as he was never able to give the Cubs what they were hoping for. When in the rotation, however, he has pitched very well, and you have to wonder if the Cubs are pondering bringing him back another season because of it.

Miley gave the Cubs five strong innings of one run, four-hit ball to lower his ERA to 2.89 on the season. He walked one and struck out five as he did more than enough to earn the win. Wesneski, on the other hand, was looking to duplicate his historic MLB debut and didn't have the same results this time around. His command was good, but allowing three runs in 3 2/3 will not get it done as he took the loss.

Throughout the day, it looked like there wouldn't even be a game getting played as heavy rains drenched the Chicago area all day. Once there was a big enough window to play, and you saw that John Brebbia was getting the start, you had to like the Cubs chances as this was shaping up to be a bullpen game for the Giants.

In total, Gabe Kapler went through six pitchers, and none threw more than two innings. They combined to allow two runs on 12 hits while adding five strikeouts to their name. Bullpen games have become much more frequent in recent seasons, which is what coaches expect to see when they choose to go with one.

Miley came out strong as his ability to change speeds and work quickly often keeps teams off balance. He allowed minimal baserunners through three innings while the Cubs had the first opportunity to score in the bottom of the third. Despite the Cubs putting runners on base in the first two innings, singles from David Bote and Rafael Ortega set the offense up in the third before Seiya Suzuki ended things with a groundout.

That was the theme all night as the Cubs had 12 hits, but only managed to push across two runs. That can't happen consistently, and the Giants made them pay for it. The game's first run came in the fourth inning, with JD Davis leading things off with a double. Following a pair of Miley strikeouts that had him on the verge of getting out of the inning, Thairo Estrada connected for an RBI single and the 1-0 lead.

Miley was pulled after a scoreless fifth inning, but at the very worst, the Cubs offense wanted to get one run to get him off the hook for the loss. That run came in the bottom of the fifth when Zach McKinstry ripped a two-out double to land in scoring position before coming around to score on the Ortega single to tie things up 1-1.

That score would hold until the seventh inning, when Estrada took Wesneski deep to put the Giants in front for good 2-1. The next inning saw the Giants put the game away for good as another long ball bit Wesneski. After walking the leadoff man to begin the eighth, Wesneski served up the two-run shot to Wilmer Flores as that homer put the Giants up 4-1 and proved to be the game-winner.

Had that homer not happened, who knows how this game would have turned out as Suzuki added a homer of his own in the bottom of the eighth to make things 4-2. With Franmil Reyes adding a single with a Christopher Morel walk later in that inning, the Cubs had a chance for more, but it was Nelson Velazquez hitting into a force out to end the threat.

Hoping to rally in their final at-bat, Yan Gomes led the inning off with a hit by a pitch before a double play had the Cubs down to their final out. That double play was significant as McKinstry followed it up with a triple that would have scored Gomes and could have represented the tying run. Instead, the Cubs came away empty and fell 4-2.

With Nick Madrigal on the IL for what looks like the rest of the year, the second base job appears to be McKinstry's as he led the way with four hits. Should that continue, he will have a place on this team next season. Ortega and Hoerner added two hits, responsible for eight of the team's 12 hits.